Why climate outlooks are so important

Climate outlooks, also called long-range forecasts, tell us what rainfall and temperature patterns are expected in the weeks, months and seasons ahead. As such, they are powerful tools to help make decisions related to weather and climate variability.

Climate outlooks indicate whether it is likely to be wetter or drier than usual, or hotter or colder. They can alert us to a difficult fire season or if a summer of floods is possible. Decisions on activities affected by weather and climate variability, from workforce planning and agricultural practices, to severe weather season preparation or even when to take a holiday, can be assisted using climate outlooks.

Australia’s first climate outlooks (see Figure 1) were created using known relationships between the atmospheric indicators of the El Niño – Southern Oscillation. They then moved to using a mix of atmospheric and oceanic indices in the mid-1990s.

In 2013, the Climate Outlooks Service made arguably its greatest leap when its statistical modelling was replaced with a computer ‘dynamic’ model that modelled physical changes in the Earth’s atmosphere, oceans, ice and land through the solving of millions of equations per second.

This was soon followed by better, high-resolution modelling in 2018, whereby forecasts out to three months ahead could be made at 60 km resolution, rather than the previous 250 km resolution. This provided more localised forecasts.

In the last few years, the Bureau has closed the forecast gap between weather and climate information with the addition of weekly and fortnightly climate outlooks (Figure 2). This service was released in August 2019. For the first time, rainfall and temperature outlooks were available for the weeks directly after the seven-day forecast. One- and two-week outlooks now complement the existing one-month and three-month outlooks. 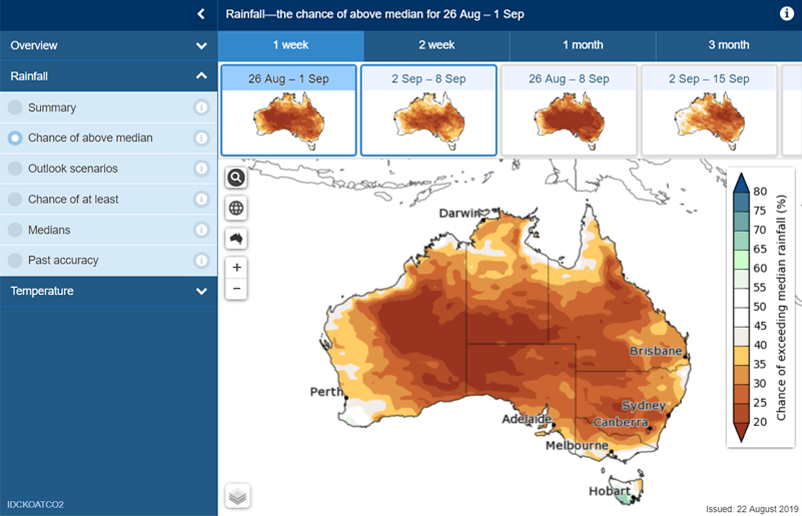 The weekly and fortnightly outlook information also features how much above or below average temperatures are likely to be across the country as well as the likelihood of rainfall totals. An additional three-month outlook period is also included. This means users can look one month further ahead than was previously possible. 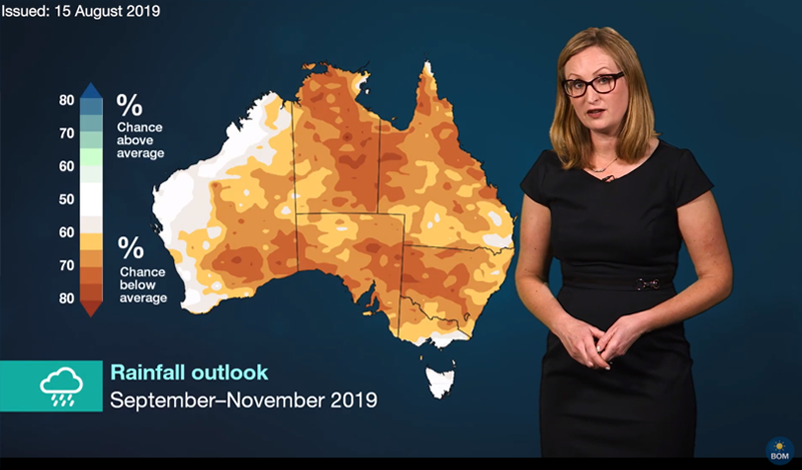 For example, farmers may want to know what the rainfall will be like over the next six weeks to decide when to sow pasture. If the climate outlook indicates it’s likely to be drier than average, they may decide to postpone.

Fire and emergency management agencies are very interested to know what temperatures may be like in the coming weeks. This assists with decisions on whether or not to undertake a prescribed burn or to roster extra staff on or prepare more resources.

The Bureau’s climate model provides for a wide range of forecast possibilities. It is now possible to produce weekly and seasonal forecasts of heatwaves, fire weather and tropical cyclone potential. The Bureau is working closely with the emergency management sector to bring new and improved forecasts online to assist with practical decision-making.

The Bureau is keen to receive feedback on any of the outlook features. The Bureau’s Climate and Water Outlook video provides a summary on recent and coming weather trends

Community-based bushfire management in Victoria, Fiona Macken, Safer Together Community-based bushfire management is a project in the Victorian Safer Together program. It takes a community-development approach to bushfire risk reduction and builds respectful, trusting relationships to identify mutual values, local assets and strengths and strategies to reduce bushfire risk.
Publication: