On 14 July 2019, a magnitude 6.6 earthquake occurred 210 km off the coast of Broome. This event, equal to the largest recorded in Australia, has provided an important learning opportunity.

When the earthquake occurred, Geoscience Australia issued an earthquake notification. The event was deemed ‘potentially tsunamigenic’, however, further analysis led to the Joint Australian Tsunami Warning Centre issuing a national No Threat tsunami bulletin (Figure 1). No deaths or injuries were recorded and reports indicated only minor damage to buildings. Given the low frequency and potentially high impact of earthquakes on Broome, this event was a rare opportunity for the emergency management sector to improve its understanding of this hazard. Data collection tools and analysis methodologies for earthquakes have evolved. In May 2018, Geoscience Australia relocated the Earthquakes@GA website to the cloud, including the Felt an Earthquake? tool. This significantly enhanced the website’s accessibility and capacity to crowdsource information related to seismic events. Improvements went beyond data collection. Geoscience Australia is trialling ways to produce maps and data in near-real-time that summarise people’s experiences, their actions and the extent of damage. The Geoscience Australia ShakeMap (Figure 2), shows the modelled ground motion and shaking intensity following the Broome earthquake. This is one of the near-real-time products being trialled to improve data visualisation and analysis. The Broome earthquake allowed the Department of Fire and Emergency Services Western Australia (DFES) to trial the new Geoscience Australia products. DFES conducted an analysis of the event using the data collected by Geoscience Australia, department incident management system records, media reports, social media and eyewitness accounts. The analysis provided important insights into how communities responded to the earthquake and where and how these actions might be improved or harnessed.

Geoscience Australia received 1364 ‘Felt Reports’ from within the region. Approximately 77 per cent of those reports were from Broome, Port Hedland and Karratha (Figure 3). Of note, 56 per cent of respondents reported that they moved away from their location when they felt the earthquake and 36 per cent did nothing. Of the 56 per cent who moved, 87 per cent were initially inside a building and tended to move outside (49 per cent) or to an internal doorway (37 per cent). Neither of these actions is considered a suitable earthquake response, with the current recommendation being for people to ‘Drop, Cover and Hold’1. When examining the percentage of individuals who reported this recommended response, our findings show a very small minority (1.25 per cent). Although Broome, the closest populated area to the epicentre, exhibited a marginally higher response (3 per cent), it was still very low. While the intensity of the ground motion may have been insufficient to trigger many ‘Drop, Cover and Hold’ responses, these figures suggest a potential gap in earthquake awareness. 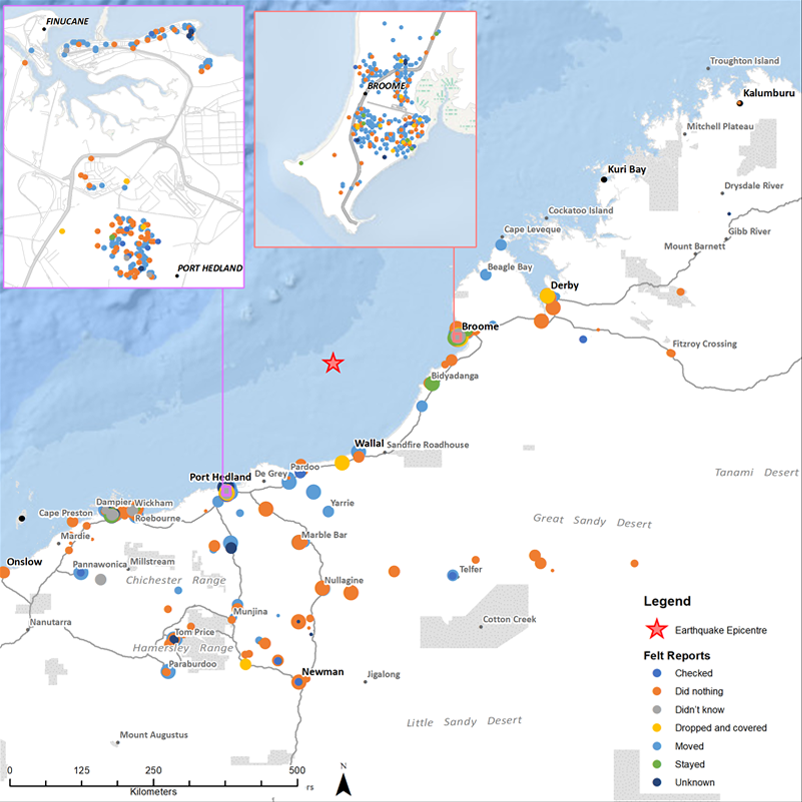 Figure 3: Felt Reports recorded for the Broome earthquake summarise where people were at the time of the earthquake, how intensely they felt it and what actions they took (according to seven action categories). Image: DFES and Geoscience Australia

While DFES promotes ‘Drop, Cover and Hold’ messages for earthquakes, it is apparent this is not reaching intended audiences. Instead, misinformation based on historical legacies and urban myth (such as doorways being stronger) prevail and lead to less appropriate responses and unnecessary risk to life.

Irrespective of the No Threat tsunami bulletin, beaches in Broome were closed and several coastal areas self-evacuated. Approximately 200 members of the Bidyadanga Community (closest community to the epicentre 180 km south of Broome) chose to evacuate. Analysis suggests the decision to self-evacuate was based on several triggers. It was reported that community members observed a rapid retreat of the tide. Other people attributed the long and strong ground movement to tsunami. There is also strong evidence suggesting that oral tradition in the region recounts a powerful tsunami hitting the Kimberley coast in the 17th century, generating waves that travelled up to 35 km inland.2

Self-evacuation triggered by recognising natural signs should be encouraged as alerts and warnings may not reach everyone in time. The initiative to evacuate demonstrates a level of community awareness within the region. Emergency managers can benefit from capturing and considering the historical, cultural or local factors that may assist appropriate responses to emergency events and evacuation. This can also be leveraged to maintain community awareness and reinforce appropriate and proportionate actions.

These are two of several important lessons DFES has drawn from the Broome earthquake, thanks to information from DFES Kimberley Region staff and the products Geoscience Australia is developing. DFES has identified areas to improve, while demonstrating that the overarching systems function satisfactorily. Geoscience Australia has also benefited from seeing how their information products are (or may be) used by emergency managers. The way DFES applied these products was highly valid and useful, yet novel and unintended in the original product design. As the data collection tools and products evolve, and our ability to analyse this data matures, there is great capacity to understand emergency events as they happen to help preparedness for future ones.

Why climate outlooks are so important, Jonathan Pollock, Felicity Gamble, David Jones, Bureau of Meteorology Climate outlooks, also called long-range forecasts, tell us what rainfall and temperature patterns are expected in the weeks, months and seasons ahead. As such, they are powerful tools to help make decisions related to weather and climate variability.
Publication: