Towamba is a small village of around 150 people west of Eden in New South Wales, with a further hundred living in outlying areas. Towamba Public School has 21 students and an enduring tradition of community volunteering and participation, supported by an active, strong and forward-thinking Parent and Citizens Association.

In December 2019, the Border Fire took hold in the forests to the south of Towamba. Other fires blazed further west and along the coast. As the fires approached, Towamba residents acted upon the advice of authorities and enacted their bushfire survival plans. Many relocated well ahead of time to Eden and Merimbula. Then Eden was evacuated. While some volunteers and Towamba locals remained to protect their properties, others only returned home in mid-February, having been away for up to seven weeks.

In February 2020, the hills in almost every direction from Towamba were burnt, but the village was intact. Homes, shedding, pasture, fencing, animals and untold numbers of wildlife were lost in outlying areas. The bush was burnt from Eden to Towamba for 20 kms and beyond to the west as far as Bombala. School children at Towamba Public School live in areas surrounded by burnt bush, right up to the edges of their homes. Miraculous saves!

Towamba families and school staff spent the holidays coping with uncertainty, displacement, smoke pollution, loss of communications and power, road closures and forced inactivity. The school opened for only two days before it became non-operational for almost two weeks due to the threat of fire and, later, flood. The school’s main priorities were to welcome students and families back into a safe, clean environment, allow students to process their experiences and maintain predictable routines.

January 20: Volunteer art teacher Vicki McCredie invited three students for an art day. Given a choice of activities, the students chose to investigate the effects of the fires, taking photos of the area and collecting samples of bark and sticks. With guidance from Vicki, they returned and jointly painted a canvas they called ‘Joy in the Struggle’. The students discussed artistic problems and solved them together. All had to agree when the work was finished and each provided their individual style while understanding that the artwork required its own resolution.

The result was an extraordinary success. Each contributor experienced the joy of sharing ideas, laughter, paint, food, cups of tea and even the critiquing of their contribution to the finished painting. The awe and delighted reactions of their parents, friends and peers to the artwork lifted the artists’ confidence.

February 2: Vicki invited two students to make a thank you sign for the fire, forestry and park volunteers. The sign was taken to the homes of the village children who each added personal touches.

February 10: Vicki invited three more students to the art project. After looking at photos collected of the fires, sun and the sky colours, more artworks were created.

February 11: Four more students turned up and began the largest painting, not yet finished. 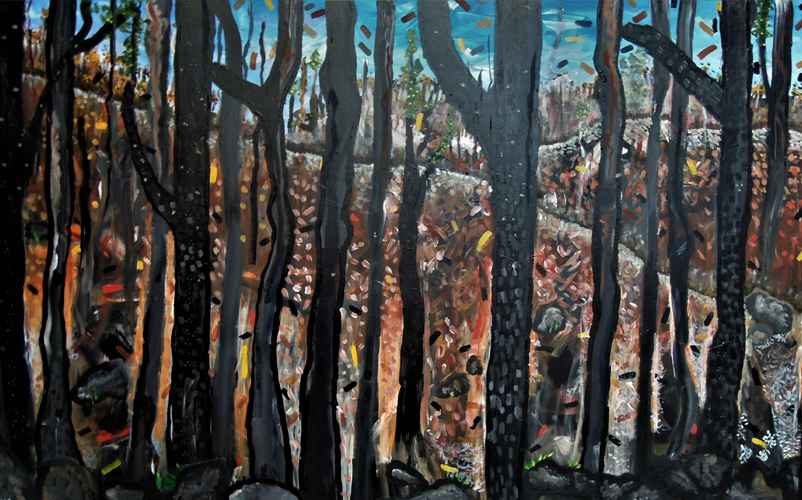 Towamba teacher, Nicola Grant, was sent images of the students’ work and discussed the option of developing a program for the whole school. The Fireflies art project was born.

The students are the leaders of the project. Initial photos taken by students and parents have accompanied their children into the burnt areas. Students are creating works from their own experiences and sharing their stories by displaying the works. They listen to feedback from friends and family and are eager to continue on to their next creation.

As the project progresses, students intend to write poems and stories to accompany their artworks in an exhibition, alongside additional images contributed by the local community.

These children are keen observers. They are quick to tell you that not all the bush was burnt, that trees are sprouting, that things grow better after a fire. The children chat comfortably because the school environment is one where they feel loved and safe.

The type of language used has high impact upon how people respond. It is the time to talk about rebuilding, regrowth and renewal – words that encompass change – rather than recovery. The young people in Towamba are showing the way and telling us to change. By seeing children confidently and creatively tell the story of the fires with a focus on renewal, the community is inspired.

Disaster and renewal: Bobin Public School, Sarah Parker, Bobin Public School Bobin is a small village in the hinterland of the mid-north coast NSW. Our community hall and school have been central to community life for over 100 years. On November 8, the Rumba Dump fire roared through Bobin. Of the school buildings, only the library survived.
Publication: