Preparing wildlife carers and groups for emergencies and disasters

Following the catastrophic bushfires in Australia over the summer of 2019–20, the International Fund for Animal Welfare (IFAW) recognised there was a significant gap in disaster preparedness among wildlife carers and rescue groups.

A significant problem was discovered during discussions with rescue groups. Many carers feared having to evacuate because they did not have a bushfire plan for the animals in their care. This meant that people were putting their own lives at risk as blazes came frighteningly close to their homes or places of work. It was an unchartered situation for many carers who were inundated with injured wildlife and with often limited knowledge, experience or tools to help them stay safe and evacuate if necessary.

Having recognised this gap, IFAW saw the important and potentially life-saving opportunity to create tools specifically designed for wildlife carers. Given disasters in Australia are unpredictable and increasing in intensity, these tools would be critical to help prepare wildlife carers and rescue groups for any potential extreme weather in the future.

There is also the ethical obligation for wildlife groups and carers to have an effective disaster response plan in place as they have taken on the responsibility of caring for dozens and sometimes hundreds of animals. How could they ensure continuity of care if they did not have the tools to develop emergency plans?

IFAW is undertaking a project to create a disaster toolkit including courses, guidelines and templates for wildlife carers and groups to assist them to prepare for, respond to and recover from disasters. The toolkit is designed with local stakeholders to ensure the resources are site, species and culturally specific. It includes documents that are scalable to a group’s current needs and the varying emergencies they could face. The objective is to help wildlife groups and carers prepare for events that occur outside the range of their normal operations and that may adversely affect their organisation’s capacity to operate.

The first tool in the kit is the emergency evacuation workshop that teaches wildlife groups and carers how to create an evacuation plan. The workshop covers how to implement a plan, and the resources, such as emergency vehicles, skilled personnel and groups  may need in an evacuation scenario. The evacuation plan features a set of procedures for moving people and animals out of dangerous and threatening zones to a safe and secure temporary facility.

An evacuation plan is essential when disasters strike as it reduces the risk to people and the animals in their care. By equipping wildlife carers with the skills to create their own evacuation plan, IFAW is giving them the tools to prepare for and respond to emergencies. This is vital to reduce panic, promote professionalism and help carers avoid becoming a victim themselves. The latter point is something IFAW identified as a significant risk among carers and wildlife groups in Australia.

IFAW has worked with wildlife carers over many years and has witnessed how selfless they can be. Many would put their own lives at risk to save the animals in their care. Thus, it was essential that evacuation plans empower carers to be proactive during emergencies. Wildlife need carers to be safe to keep them safe. Through IFAW’s training, carers can continue saving wildlife and mitigate risks to their operations.

The objective of the 2-hour emergency evacuation workshop is to help wildlife groups draft an evacuation plan they can further develop with their teams. Following a template, instructors guide the groups through each step, sharing experience and facilitating discussions on who would be involved, the facilities and resources needed and the plan of action for each step. 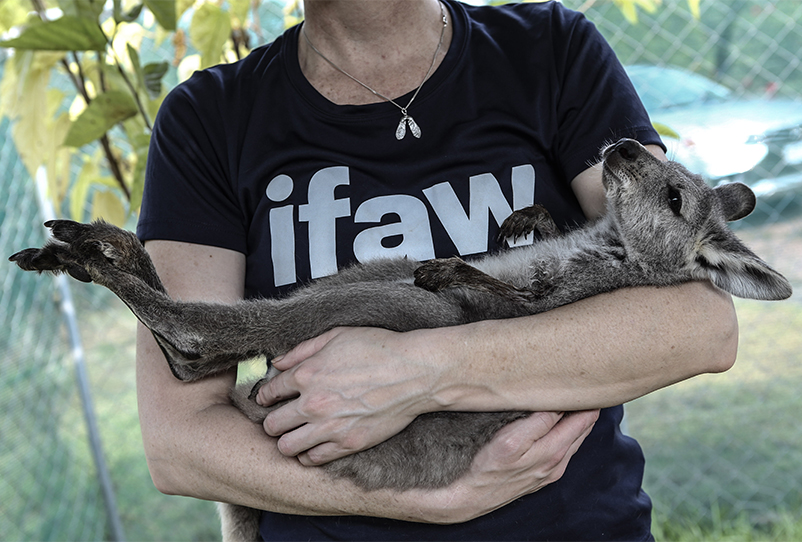 An IFAW responder cradling a wallaby joey in rehabilitation with a wildlife carer.
Image: IFAW

Step 1 – establish a team and support network. This requires the group to define roles and responsibilities and includes appointing an emergency response coordinator. By establishing clear lines of delegation and outlining responsibilities, panic reduces, increasing the potential to execute plans in a safe and efficient manner.

Step 2 – identify the resources needed. This includes trained and skilled personnel, such as leaf cutters and drivers, as well as the equipment required like medical supplies, transportation and carriers. This step also stresses the importance of backup resources including secondary facilities, and carers who can be called on if needed. By identifying these resources in advance, groups are equipped to respond to emergencies of varying scale and type.

Step 3 – using the number and species of animals in their care, carers and groups practice categorisations, such as critical-care or long-term patients. For example, long-term patients could be less likely to experience stress by relocation compared to critical-care animals that need extra attention; these categories may influence the evacuation procedures. Resources for preparing evacuation kits are provided to support groups in developing care instructions for the temporary carers on how to look after specific animals. The kit also includes transportation logs and identification information like tags, photographs and microchips to avoid issues of animals being lost, misplaced or mixed up during an evacuation.

Step 4 – establish site layout, evacuation routes, assembly areas and a last walk-through checklist. During emergencies and disasters, conditions may change rapidly, so the location of off-site refuges and evacuation routes is vital. By identifying what services, routes and access is available on the site and nearby before a disaster strikes, wildlife groups and carers have a better knowledge of where they can shelter if needed and what route is most safe to use. This knowledge can be life saving during an emergency.

Step 5 – prepare clear and specific procedures outlining the actions to be taken at the various stages of an emergency. This guides the team on what triggers activate the evacuation plan and defines actions in the stages leading up to evacuation. These procedures minimise delays in putting a plan into action so that animals and people can evacuate before it becomes too dangerous.

It is essential the groups put their plan into action, which is why a ‘walk through’ is recommended as the next step, to identify any gaps, review its effectiveness and take corrective action. Then groups would be encouraged to test the plan through a disaster simulation where team members practice the evacuation plan using toy animals. This provides the groups with a lifelike scenario of how the plan will be implemented and builds confidence. After the simulation, a group debrief identifies any issues, gaps, concerns and corrective actions.

Groups are also encouraged to share their evacuation plan with local emergency services authorities. IFAW advises groups meet with authorities to discuss and review their plan, and to confirm the lines of communication during emergencies.

A lot of knowledge is shared during the workshop within a short period of time. Checklists and templates are provided in advance to maximise the workshop’s productivity. After the course, IFAW’s relationship with groups and carers continues with check-ins, in case extra assistance or resources are needed.

The 2019–20 bushfires will not be the last disaster in Australia. With climate change influencing the frequency and intensity of weather events, it is more important than ever to help carers and rescue groups prepare. Through IFAW’s disaster toolkit project, resources will build the skills of carers to safely look after their own lives as well as the lives of the animals they care for.

Improving outcomes for wildlife, Leanne Taylor Historically, wildlife has not been a high priority in disaster management planning. With hundreds of species at risk of extinction and almost 3 billion native animals estimated to have been killed or displaced during the 2019–20 Australian summer, change is needed.
Publication: