The emerging role of Zoos Victoria1 and other conservation-based organisations in responding to emergencies was highlighted during the Australian summer bushfires in 2019–20. Working alongside partners in government and local communities, as well as research, wildlife, veterinary and non-government organisations, the experience and expertise of Zoos Victoria played a lead role in wildlife response, relief and recovery efforts.

Across Australia, more than 3 billion animals were killed or directly affected by the summer bushfires, including over 330 threatened species and 37 threatened ecological communities. Polluted and destroyed habitats, a lack of water, food and shelter, increased predation and stress as well as serious, long-term adverse effects on biodiversity will likely lead to more deaths.

In Victoria, 215 rare and threatened species had greater than 50 per cent of their habitat burnt, pushing some species closer to extinction. The Zoos Victoria Wildlife Conservation Master Plan 2019‑2024 outlines its commitment to 35 threatened south-eastern Australian species, 15 of which had habitat significantly destroyed by the bushfires.

In recognition of the important role zoos can play in the care, protection and conservation of wildlife, Zoos Victoria was appointed by the Department of Environment, Land, Water and Planning (DELWP), the lead agency for responding to and managing wildlife emergencies in Victoria, to assist with the threat to wildlife and biodiversity from the escalating bushfires.

Zoos Victoria assessed and prepared resources across its 3 zoos including wildlife veterinary care, transport, equipment, dietary items, quarantine, rehabilitation and housing capacity for the variety of species that could require immediate and long-term assistance.

In the response phase, Zoos Victoria provided expertise on wildlife welfare and threatened species conservation, including veterinary, behavioural and ecological advice. It also supported wildlife triage, rescue and transportation, provided temporary housing and rehabilitation at its properties, advised on and supported supplementary and emergency feeding programs and supported interstate wildlife response initiatives. A Zoos Victoria Director was deployed to the State Control Centre to advise on the high-level coordination of wildlife welfare response efforts.

Zoos Victoria assisted in preparing and disseminating information and advice about wildlife welfare to bushfire-affected communities and to the public. This included fundraising initiatives and advice regarding monetary, human and material donations and how members of the public could assist wildlife following fires or heatwave events.

Contributing to the development of the Victorian Bushfire Biodiversity Response and Recovery Plan2, Zoos Victoria has a lead role in 3 of the recovery themes:

As fires threatened south-east Victoria, an alert from the Arthur Rylah Institute3 raised concern for a population of endangered eastern bristlebirds in the Cape Howe area in East Gippsland. DELWP requested that Zoos Victoria and other specialists retrieve a number of the bristlebirds for safekeeping and to support a new captive breeding population if their habitat was destroyed.

Fifteen birds were collected before the operation was halted and the team evacuated due to the approaching fire. The Victorian Fisheries Authority and the Royal Australian Air Force transported teams and birds to Melbourne Zoo. Zoos Victoria veterinary staff and zookeepers provided expert care to mitigate the stress of capture, transport and captivity. Crucial support for this operation was provided by DELWP, Parks Victoria, Monash University, University of Wollongong and Currumbin Wildlife Sanctuary. The eastern bristlebird habitat at Cape Howe did not burn and 8 birds were returned to their original locations in April and October 2020. 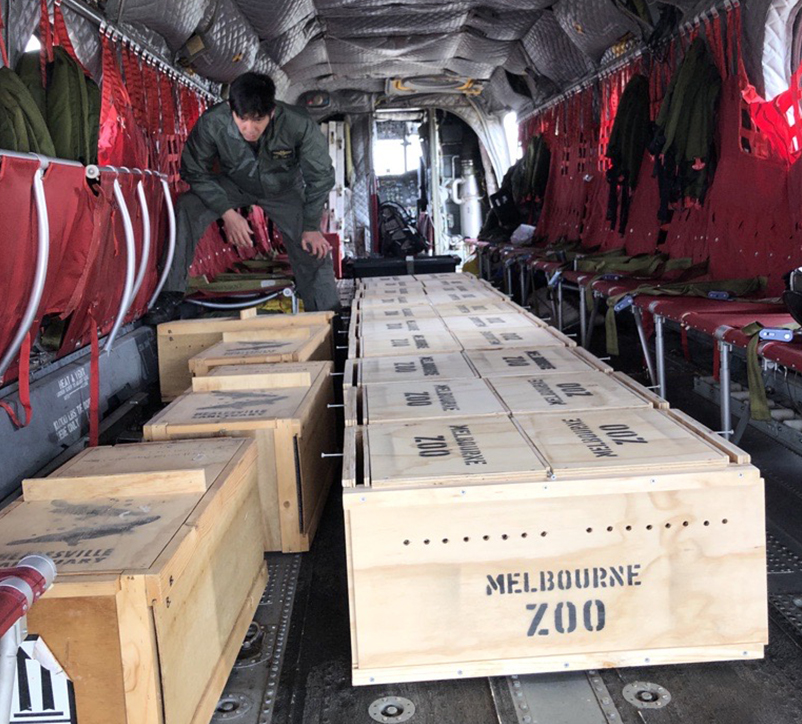 Almost 3000 animals were assessed in the field, of which 259 were sent to wildlife triage units for further assessment. Most of the animals were koalas (75 per cent). Other species included feather-tail gliders, grey-headed flying foxes, eastern grey kangaroos plus a superb lyrebird, tawny frogmouth, lace monitor and a red-bellied black snake. Animals were assessed in triage and prognosis determined based on the location and severity of fire-related injuries, such as smoke inhalation, heat stress and dehydration as well as existing comorbidities, age and condition of the animal. Twenty per cent of animals were euthanased after initial veterinary examination. Nearly half were released within 24 hours back to their original or proximate location following treatment. Thirty-five per cent of animals presenting to triage required hospitalisation or ongoing care.

A koala’s natural response to fire is to seek refuge in tree canopies. Unfortunately, due to the severity of these fires, this led to many koala injuries and deaths. Zoos Victoria veterinarians provided expertise in assessing injured animals. While some koalas could be released after short-term care, 6 uninjured orphaned juveniles were hand-raised by DELWP-registered wildlife carers. A further 27 severely affected koalas were evacuated with veterinary teams by the Royal Australian Air Force to wildlife hospitals at Melbourne Zoo and Healesville Sanctuary for intensive care. These koalas underwent intensive burns treatment and pain management over many weeks. Specialised nutrition and housing allowed quiet spaces for koalas to move and forage while being monitored by wildlife-experienced veterinary nurses and keepers. Once the koalas no longer needed intensive veterinary management, they were transferred to large, purpose-built, naturalistic enclosures at Healesville Sanctuary and at Phillip Island Nature Park. Regular veterinary assessments were conducted as the koalas recuperated in readiness for a release back into the wild. 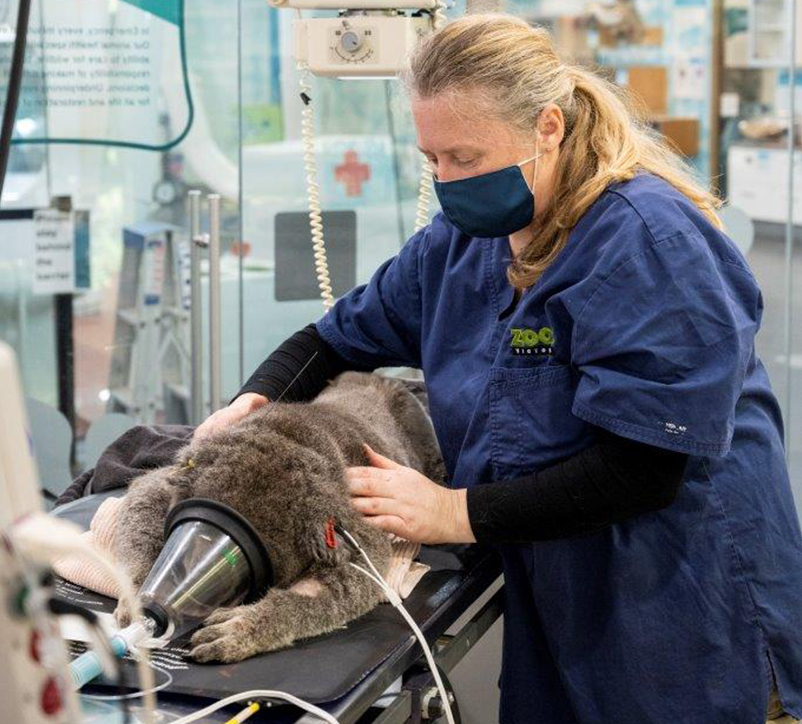 In late 2020, after pre-release health assessments, 14 koalas were released in East Gippsland close to their original rescue location. Each animal was fitted with a GPS collar to monitor its movement. Repeat health assessments provided a better understanding of the ongoing health and behaviour of each animal following its release. The collars were removed in early 2021 to allow for less intensive longer-term monitoring.

Strong existing and new partnerships and alliances were paramount in developing and managing the wildlife emergency response. Annual reviews of wildlife partner contacts, capacity and willingness to support wildlife disaster welfare work are now conducted. Existing stakeholder relationships within the emergency management and wildlife sectors will be strengthened to improve collaborative, best-practice responses to wildlife needs.

Zoos Victoria and its partners identified the need to build wildlife welfare capability and coordination across the wildlife and veterinary sector, including in triage and field assessments. Zoos Victoria is reviewing medical records of wildlife assessed and treated by veterinarians during the bushfires to get a better understanding and prognosis of common fire-related injuries, to improve decision-making and to update emergency medical management of fire-affected wildlife. Improved understanding of the welfare implications of veterinary care, rehabilitation and release of fire-affected koalas will inform existing protocols and improve decision-making for wildlife emergency response. Lessons from the eastern bristlebird extraction will contribute to improved species extractions in disasters and have been incorporated into Zoos Victoria’s emergency response plans for rescue of threatened and other species. This includes risk mitigation, transport and housing requirements.

Building resilience for the future

The critical role of zoos and other conservation-based organisations will grow in the current climate crisis. A focus of emergency management planning for Zoos Victoria is to enhance wildlife and threatened species resilience in the face of more frequent, severe and overlapping crises predicted with climate change. The Zoos Victoria Conservation Master Plan 2019–20244 and Bushfire Response and Recovery Plan5 support its roles in building resilience to future disasters.

The Australian Royal Commission into National Natural Disaster Arrangements calls for the establishment of best-practice arrangements and responses to wildlife emergency response and recovery and the development of national standards for rehabilitation, assessment, treatment and care for wildlife. Victoria’s Bushfire Emergency: Biodiversity Response and Recovery Plan 20206 outlines short- and long-term actions to support the survival of fire-affected wildlife and threatened species and ecological communities following the bushfires.

Zoos Victoria has engaged an Emergency Management Adviser and a Wildlife Welfare Coordinator to support the development of its critical roles in emergencies and build its ability to mobilise quickly, effectively and collaboratively to support wildlife as part of a state-led response. The Zoos Victoria Emergency Management Plan expands organisational emergency management arrangements to integrate with Victoria’s emergency management framework, including collaborative wildlife emergency preparedness, response and recovery operations. In addition to bushfires, the plan considers other hazards like floods, storms and heat events and supports the mental health and wellbeing of staff involved in wildlife emergencies.

As a consequence of the summer bushfires, Zoos Victoria has a significant role in wildlife emergency response training targeted at response roles in triage units and field assessment teams. This is being delivered to partners in wildlife and general practice veterinary sectors. Zoos Victoria is also improving and expanding its infrastructure and temporary housing facilities, reviewing and expanding threatened species conservation programs, developing new captive breeding programs for severely threatened species, increasing its organisational focus on wildlife welfare and leading ongoing monitoring of health and welfare of rehabilitated koalas following their release.

Zoos Victoria plays a key role in determining the status and support required for threatened species and vulnerable ecosystems, welfare of individual animals and nature-based community recovery. This work is critical to build resilience, prepare for future disasters and realise our vision for a future rich in wildlife.

3. The Arthur Rylah Institute for Environmental Research is a leading centre for applied ecological research.

6. Information about the plan is at: www.zoo.org.au/melbourne/whats-on/news/bushfire-funds-kickstart-wildlife-recovery-and-response-plan/.

This article is a summary of

More information about Zoos Victoria and its programs is at: www.zoo.org.au.

Wildlife response in bushfires: lessons from Australia’s 2019–20 summer, Peta Norris and Tim Johnson The bushfires in Australia over the summer of 2019–20 were unprecedented and tested systems and stretched resources like never before. The NSW Government’s $1 million bushfire relief for wildlife rehabilitators program supports wildlife rehabilitators and the veterinary sector to recover from bushfires and prepare for future extreme events.
Publication: