AVERT: a novel approach to wildlife rescue and welfare in Australia

In the immediate aftermath of the summer bushfires in Australia in 2019–20, the Australian Veterinary Emergency Response Team (AVERT) was mobilised for the first time. Based on this experience, it is evident that a well-coordinated body of volunteer veterinarians and veterinary nurses has a significant role to play following disasters.

AVERT was established by Australian-based charity, Vets Beyond Borders, in 2015 in view of the ever-increasing risk of disaster and emergency disease outbreak in Australia. The aim was to create a national pool of veterinary professionals with experience in specific animal species, including wildlife, prepared to volunteer in formal responses to such events.

Prior to the formation of AVERT, the fieldwork of Vets Beyond Borders volunteers was largely confined to parts of the world where rabies is endemic and leads to the deaths of around 60,000 humans and countless animals worldwide every year. As the organisation grew, so did the number of volunteers, however many were unable to travel overseas for extended periods of time.

Historically, Australian Government authorities and their veterinary personnel, together with private veterinary practices in affected areas, have provided an appropriate veterinary response following bushfires and floods, which are regular occurrences in Australia. However, the scale and frequency of such events has increased in recent years and this trend is predicted to continue, which places pressure on this arrangement. AVERT was formed to help address this issue, but not as a stand-alone initiative.

Irrespective of location, the work of Vets Beyond Borders is based on the development of partnerships and collaborations. In the case of AVERT, much time was, and continues to be, spent creating associations with state governments to facilitate the prompt deployment of AVERT volunteers following requests for assistance with veterinary care of livestock, wildlife and companion animals, following natural disaster or outbreak of emergency disease.

Veterinarians and veterinary nurses interested in donating their time during emergencies complete a comprehensive application and provide details including location, areas of expertise and relevant licences held. A confidential database of successful applicants is maintained by Vets Beyond Borders. 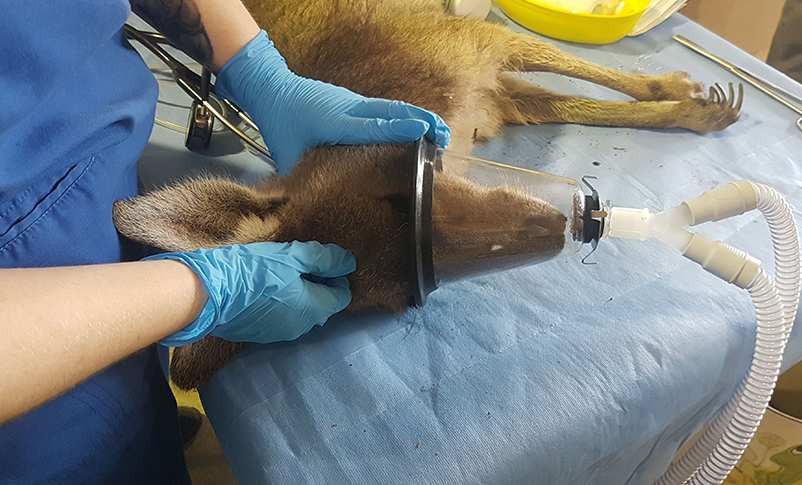 Following the bushfires that ravaged large parts of south-eastern Australia in the summer of 2019–20, Vets Beyond Borders deployed AVERT volunteers to provide care to affected animals in New South Wales and South Australia. It also liaised with the Australian Veterinary Association Victorian division charged with responsibility for sourcing veterinarians to assist in that state.

Following the emergency response, it became evident that the demand for volunteer veterinarians and veterinary nurses would persist for many months. This was specifically with respect to wildlife species in the treatment of burns and complications arising from injuries, requiring long-term commitment. Vets Beyond Borders rostered AVERT volunteers through direct contact with wildlife rescue groups in affected areas. Over the course of the response, 52 AVERT volunteers (several deployed on more than one occasion) provided in excess of 400 days of veterinary care. 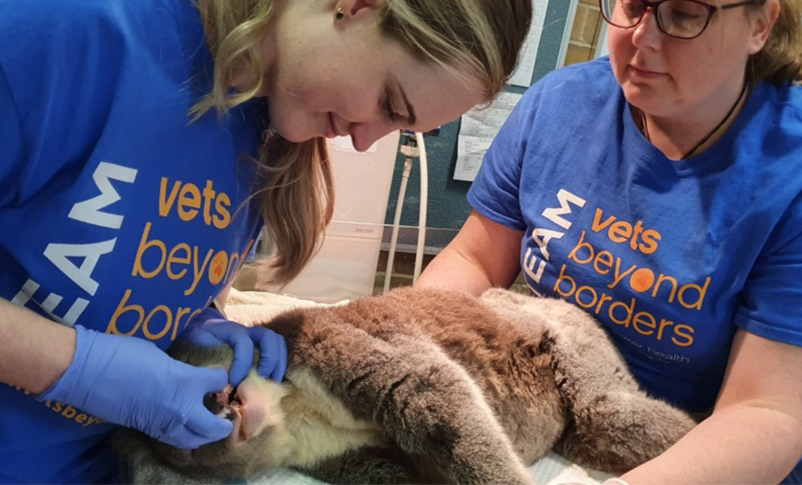 An injured koala is examined for injuries by Vets Beyond Borders volunteers.
Source: Adelaide Koala Rescue

Volunteers – There was a dearth of veterinary personnel with specific training and experience in wildlife medicine and surgery available to respond to disasters on the scale of the bushfires. This lack of ready expertise affected the quality and consistency of the care provided. In response, Vets Beyond Borders has prioritised training for AVERT volunteers to refine their skills in wildlife care. Thanks to Vets Beyond Borders’ sponsors, by June 2021, 24 AVERT-registered volunteers had completed comprehensive training in wildlife care, delivered by the Taronga Conservation Society.

Delivery of care – Irrespective of the experience of volunteers, the quality of care they were able to provide to affected wildlife was hampered by the availability of necessary equipment and veterinary supplies. Many wildlife rescue groups were overwhelmed by logistical demands placed on them. In addition, there was significant variation in clinical policies and protocols from location to location, especially with regard to euthanasia. In its overseas activities, Vets Beyond Borders addresses this problem through its partner organisation scheme, which focuses on providing on-the-ground assistance to animal welfare groups able to provide a satisfactory level of clinical infrastructure and resources. This arrangement is now being rolled out across Australia. With respect to wildlife, it is anticipated that collaboration between Vets Beyond Borders and large wildlife welfare organisations, such as Taronga Conservation Society, Zoos Victoria and WA Wildlife, will lead to consistency of clinical care and improved outcomes for animals.

Coordination – The response with respect to provision of care to wildlife affected by the 2019–20 bushfires in south-eastern Australia has been generally acknowledged to have been, at best, sub-optimal. It is hoped that the numerous debriefings and review processes, to which Vets Beyond Borders is contributing, will deliver clearer lines of communication and efficient collaboration between governments and non-government organisations.

The AVERT database currently contains the details of 2031 veterinarians and veterinary nurses and an increasing percentage have a significant level of training and expertise in wildlife care. Given projections for future disasters, the AVERT volunteer community is well positioned to make significant contributions to animal welfare responses following such events.

Vets Beyond Borders acknowledges the support of The PetBarn Foundation, VetPartners, Royal Canin, PetSure and World Animal Protection Australia in sponsoring the training of AVERT volunteers.