Book Review: Surviving with Companion Animals in Japan: Life after a Tsunami and Nuclear Disaster 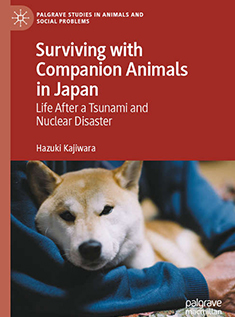 It is rare to find literature outside of the western world that provides an insight into how companion animals and their guardians are affected by tsunami as well as a radioactive emergency. The author has purposely crafted a mixture of anecdotes and references to highlight that the human-animal bond is just as strong in Japan as other commonly studied countries such as the United States, Australia and New Zealand and that such bonds can heavily influence citizen behaviour during and following a disaster.

The book is aimed at those who have an interest in disasters and animal welfare and will be of use to policy makers, emergency managers, veterinarians, animal welfare workers and community leaders.

The author has been guided by recognised scholars such as Professor Leslie Irvine and Professor Annie Potts and the content of the book is largely drawn from Kajiwara’s doctoral dissertation that she completed through Rikkyo University. Having a PhD specifically researching the 2011 Japan tsunami and nuclear disaster makes her a world authority on the matter and her novel concept of ‘bonding rights’ builds on existing literature around the intrinsic link humans share with companion animals.

Beside the book Animals in Emergencies: Learning from the Christchurch Earthquakes, by Potts and Gadenne in 2014, there are few other animal disaster management books written by scholars that are event specific. This makes this book an important and accurate academic contribution to the body of knowledge in this emerging discipline. The book also makes extensive use of peer-reviewed literature and direct interviews to justify the positions made.

The book raises numerous issues and many of these are lessons that have been identified in previous disasters. These include the use of ‘guidelines’ that are too weak to be effective and specific laws may be more appropriate, and that where evacuation centres fail to accommodate companion animals with their guardians, both human and animal welfare will be compromised. This creates unnecessary loss of confidence in, and dissent against, authorities. Issues around lessons management are highlighted that are not unique to Japan nor the emergency management sector.

As companion animals are treated as part of the family, our emergency planning should reflect an ‘all of family’ approach. In some cases, families had to drive 150 kilometres from their temporary accommodation to see their pets that were left to stay in the radioactive zones as instructed by authorities.

Former US FEMA Administrator Craig Fugate said when talking about Hurricane Katrina in 2006, “Our messaging at the time was ‘if you evacuate, leave your pets behind with plenty of food and water’. But I am like, isn’t that a mixed message? Because I am either saying it’s your pets last meal, or it’s not really that bad and you don’t need to go”.1 This analogy is resounded in Kajiwara’s book, with authorities giving conflicting safety advice about the levels of radiation that lead to people illegally staying in radiation exclusion zones to be with their animals.

Any good book will have limits imposed on its scope to ensure it is manageable to write as well as read, so it is unrealistic to expect every potential issue to be explored. I would suggest it adds to views by Heath and Linnabary (2015)2 that the root cause of animal welfare in disaster is due to a weak animal management system and overpopulation. The other two issues that appear omitted were the impacts on disability assistance (service) dogs and whether any human fatalities or radiation sickness were due to people taking measures to protect animals.

This book highlights that emergency managers can do better. Animal disaster management policies and guidelines need to be strengthened with laws and resourced to give effect. There needs to be greater collaboration at the international level to share lessons identified and in a more sustainable fashion.

Conference preview: research, insights and case studies to feature at AFAC21, Molly Price The AFAC21 program will respond to the theme ‘Balancing impact and expectations’, focusing on managing the consequences of major events, while meeting the expectations of the community and government.
Publication: