Cities are transforming because of demographic and social changes, inequity and environmental risk. In response, signatories to the New Urban Agenda1 made commitments focusing on vulnerable urban groups, including children. Child-centred organisations acknowledge they need to respond by increasing efforts to build resilience and align these efforts with global declarations, such as the New Urban Agenda. The Child-Centred Urban Resilience Framework (CCURF) was developed to assist the work of these organisations to build resilience in cities in support of children. The completion of the CCURF coincided with the United Nations Conference on Housing and Sustainable Urban Development, Habitat-III (October 2016) and was launched at Habitat-III by Gillian Bird, Permanent Representative of Australia to the United Nations.

The CCURF is guided by urban systems thinking and aligns child and human rights and gender-sensitive approaches with urban development and promotes children as agents of resilience. The CCURF sets out four strategic action areas:

The CCURF is a combination of research, experience and expertise, in particular, research undertaken by Plan International with IIED (Brown & Dodman 20142) and Arup’s work with the support of the Rockefeller Foundation on the City Resilience Index.3 While the City Resilience Index and other tools such as the ‘The TEN Essentials for Making Cities Resilient’4 by UNISDR and the ‘City Resilience Profiling Tool’5 by UN Habitat provide guidance for resilience planning at a city scale, there was a need for a simple tool for organisations working in urban communities with the poor and vulnerable that addressed the particular risks facing children. There was also recognition that each community, program and city was different due to local contexts and divergent shocks and stresses. Any tool needed to help users understand urban dynamics, stakeholders and areas of focus so as to maximise the impact on beneficiaries. The idea of the CCURF, and the framework, was to further international development efforts in urban resilience at local levels.

The CCURF draws on the experience and expertise of Plan International and Arup. Participation was achieved through semi-structured interviews where gaps and challenges were identified. Country-level workshops explored the concepts of resilience and systems thinking with reference to specific country contexts. A regional-level workshop synthesised learning using a framework to draw out priorities for action. 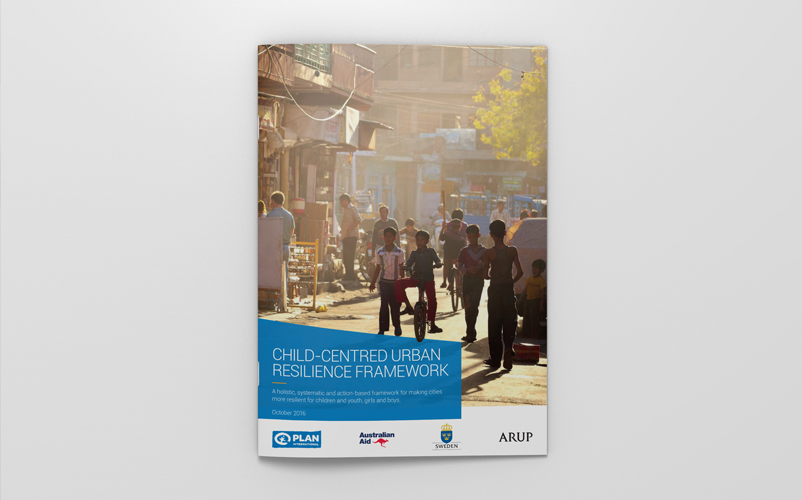 The CCURF reinforces the urban paradigm shift as called for by the New Urban Agenda, specifically the rethinking of the way cities and settlements are planned, financed, developed, governed and managed to include the perspectives of children. The CCURF reinforces the principle of ‘leave no one behind’ (one of the guiding principles of the New Urban Agenda) by including children as active agents resilience planning and implementation. Using the CCURF contributes to sustainable cities and communities in line with the United Nations Sustainable Development Goal 11 - Make cities and human settlements inclusive, safe, resilient and sustainable, in particular, Targets 11.3 and 11.7.

Plan International used the CCURF to review its urban disaster risk reduction programs in Indonesia, The Philippines and Myanmar and to identify how these existing initiatives were contributing to ‘urban resilience building’ as described by the CCURF. The CCURF was used to design and implement urban resilience programs in cities including Jakarta, Manila and Yangon. These programs engage with children as target groups. Plan International used the CCURF to advocate for inclusive national policies and frameworks to cater to the specific vulnerabilities and needs of children. Arup has used the CCURF to assess the contribution of disaster risk reduction in urban projects for children and to develop its ‘Child-Centred Crime Prevention through Environmental Design’ approach.

Application in the future

In Indonesia and the Philippines, Plan International is using the CCURF in conjunction with participatory-action-research approaches to include children in designing solutions. The CCURF will also be used to support capacity building of local governments in The Philippines to increase youth agency and participation in urban planning and governance activities.

In the rapidly growing cities of the Australasian and Pacific regions, children remain one of the most vulnerable groups (Brown & Dodman 2014). The CCURF is a useful tool for urban programming by organisations to bring together system-level thinking, child rights, gender-sensitive and strength-based approaches for collaborative and coordinated actions with and for children. As children’s online and ‘on-street’ lives become increasingly intertwined, the CCURF may also support new designs for child protection and safety that reflect this reality. A child-centred approach to urban planning, safety and design helps tackle urban challenges in a holistic and integrated manner. This has all the potential to lead to inclusive, liveable and safer cities that work better for everyone.