The Australian Academy of Science recently held an important symposium on natural disasters as part of its annual Science at the Shine Dome in Canberra. The theme for the symposium varies each year, with much thought given to where next to shine the light on new and important scientific developments. This year, the Academy turned its attention to the multi-disciplinary science involved in understanding and coping with natural hazards.

The 2018 symposium titled, Predict, Respond, Recover: Science and Natural Disasters, provided compelling evidence that there is a lot of science involved in disaster mitigation. The 200 people at the Shine Dome heard four excellent keynote addresses and watched a video that provided the big picture on the role of science in natural disaster reduction. The keynote addresses were supported by six excellent specialist presentations that helped fill out some of the detail and update the Academy audience on the latest developments.

We also heard a little of the history and international context of the scientific research, operational infrastructure, services and policy issues in this area. In particular, four elements of that history and context deserve mention for having provided the foundation for much of our current knowledge of the science of natural hazards and natural disasters:

I recall these specifically because one of the defining features of the role of science in disaster reduction has been the high level of collaboration and cooperation needed for success.

From earliest times, one of the most basic obligations accepted by communities has been that of working together to protect their members from danger including from the extremes of weather and climate. Indeed, it was the 17th Century Genevoise philosopher Jean-Jacques Rousseau who argued that Providence had created natural disasters to force people to cooperate.

One important aspect of that cooperation that came through clearly in the Shine Dome presentations was cooperation between the natural and social sciences. It is reassuring that, just as International Council for Science and the International Social Sciences Council are merging to bring the natural and social sciences closer together at the global level, this symposium has helped elaborate the increasingly important role of the social sciences in enabling future communities to cope with living in a warmer and more hazardous future climate.

Of course, in just one day, we could not go into detail on every aspect of Predict, Respond, Recover nor on all the natural hazards that can produce disasters in Australia. However, the Academy’s keynote speakers provided excellent overviews of the systems underpinning Australia’s meteorological, hydrological and oceanographic warning services, of the science and management of earthquakes and of the national research questions that need to be, and are being, addressed. They also delivered a thought-provoking analysis of the role of science in policy development based on insight into the challenges of disaster management in Australia. 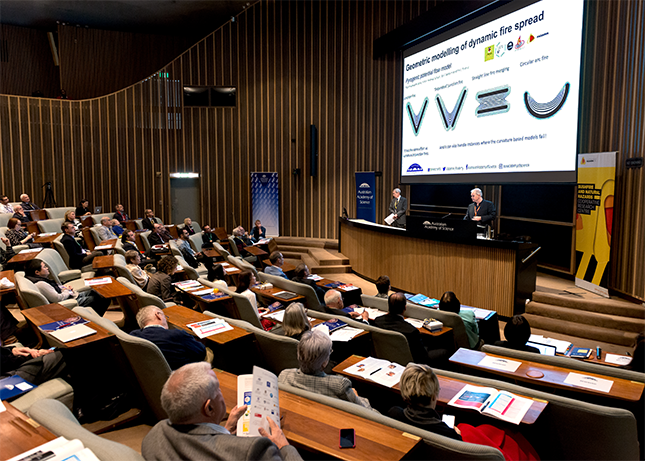 The symposium at the Shine Dome in Canberra considered the multi-discplinary science involved in understanding and coping with natural hazards. Image: Bushfire and Natural Hazards Cooperative Research Centre

We heard important snippets about most of the hazards of meteorological and geological origin including severe weather, earthquake, heatwave and bushfire, plus the more specific challenges of thunderstorm asthma, marine heatwaves and the use of warnings. Time precluded our going into much detail on flash and riverine floods, hail storms, tornadoes, tsunamis and storm surges and we hardly touched on drought. There was also little on the science involved in assessing the economic costs of natural disasters in Australia. It would be good to further explore the scientific issues involved in designing effective disaster insurance as well as the medical, engineering, logistic, governance and political challenges of disaster relief and recovery.

There were, however, many powerful new insights from the presentations at the 2018 symposium that will add importantly to the general body of knowledge of disaster science from earlier national and international research and symposia. These will gradually find their way into the disaster mitigation policies and management systems and services at all levels of government in Australia. And we, the audience, were reminded (if reminder were needed so soon after news bulletins showed the destruction in Darwin from Cyclone Marcus and the horror of the Tathra bushfires) that Australia can often find itself with simultaneous and entirely different disasters in different parts of the country.

Science at the Shine Dome attracts a national and international audience and boundless networking opportunities with Australian Academy Fellows, Chief Scientists, Nobel Prize winners, early- and mid-career researchers, government representatives, politicians, media, science-associated organisations and the science-interested public. Online, Science at the Shine Dome reaches audiences of more than 500,000 people via a range of social media that makes the event truly global. This year, the Bushfire and Natural Hazards CRC was the main supporter and assisted with the organisation and provision of speakers.

This edition of the Australian Journal of Emergency Management provides further important evidence of the science behind disaster mitigation and includes research reported at the AFAC18 conference in Perth last month.

In this edition, Brookfield examines how natural disasters can impact on the homeless and shows the limitations of state-funded agencies and the important role of nongovernment bodies in caring for communities. Berry and Kragt, in separate research articles, look at the roles and motivations of the volunteer forces that are so relied on during emergencies. Every examines the emerging field of psychological preparedness communication and its contribution before a disaster hits. McCarthy shows how both resilience and recovery can be improved with emergency plans that include pets and farm stock.

I am sure that those who heard the presentations at the Shine Dome and read the journal’s pages will need little further reminder of the continuing scientific and other challenges of living in a land of ‘droughts and flooding rains’.

Prepare for extended severe weather seasons, David Bruce, Bushfire and Natural Hazards Cooperative Research Centre Australia needs to prepare itself for the threat of year-round natural hazards that in the past were associated only with the summer months.
Publication: