Disaster Management in Australia: Government Coordination in a Time of Crisis 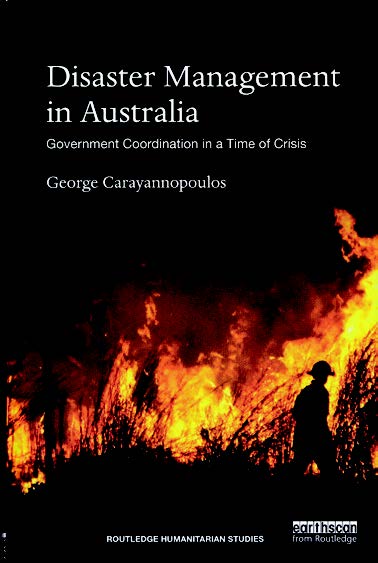 Since 2000, significant disasters have captured national attention. Bushfires in Canberra and Victoria, floods in Queensland, Victoria and New South Wales and several tropical cyclones tested emergency services ability to coordinate across services and jurisdictions. These events, scrutinised under a growing social media focus, put increasing demands on governments to coordinate above traditional arrangements and think differently about how they communicate and are perceived as much as how the response is executed.

Terms such as ‘whole-of-government’, ‘all-hazards’ and ‘shared responsibility’ are now commonly used across Australia in high-level emergency management planning documents and strategies. While there is general agreement in principle that such approaches are required, challenges remain in implementing them on the occasions when they are required.

George Carayannopoulos, in the course of his PhD research, reviews the theory of whole-of-government coordination and examines its implementation to historic disasters in his book Disaster Management in Australia: Government Coordination in a Time of Crisis. The book investigates whether, in the heat of a crisis, the principles and commitments to whole-of-government response are applied or put aside, or as the book says, ‘whether they were “rhetoric” rather than “reality”’.

Literature on the idea and application of the whole-ofgovernment approach is reviewed, then documents are analysed and outcomes of interviews with key people are presented. These are associated with two recent national crises, the 2009 Black Saturday Bushfires and the 2011 Queensland Floods.

The analysis succinctly illustrates the public policy environments during 2009 in Victoria and 2011 in Queensland in which the crises occurred. It then clearly examines the events and the government responses using the themes of whole-of-government, crisis management, leadership, coordination, organisational culture, social capital and institutions.

Each state’s ‘whole-of-government’ response is compared and contrasted. Victoria turned out to be more fragmented at the time, where Queensland was able to unify more effectively. Narratives of ‘failure’ and ‘success’ in the two responses are analysed further; analysing political, bureaucratic and operational responses. The themes that emerge are clear and may not surprise many who have participated in reviews and strategies in this area. However, the academic analysis based on the two recent and iconic national emergency events adds new weight to the findings. These include issues such as:

The final reflections echo the author’s research approach, posing more research questions about legislation, governance and inquiries and their links to the management of future crises.

Reading the book as a policy practitioner in a government agency, it has a clear audience in managers seeking to improve planning, governance and crisis management across agencies and governments. This is an area that is often discussed but rarely analysed. This work is welcome in providing new insights to the debate.

Thinking of the desired audience, the academic style of the book makes it hard at times to uncover the findings and reforms that policy practitioner’s desire. A summary of key findings, qualities of ‘success’ verses ‘failure’ in achieving effective whole-of-government coordination would greatly improve the accessibility and utility of this research.

The potential benefit of this work is in influencing future policy frameworks and governance, improving whole-ofgovernment responses and reducing the losses of future crises and disasters. This is a valuable piece of research to the emergency management sector and useful when considering future policy and governance reforms.

Usability of MyFireWatch for non-expert users measured by eye-tracking, Dr Danielle Brady, Dr Neil Ferguson and Dr Matthew Adams, Edith Cowan University and Landgate MyFireWatch is a public-access fire information system that shows the location of satellitederived hotspots on a map layer. Originally developed for expert users, MyFireWatch was created with a user-centred design methodology. This paper describes a study of the onscreen viewing behaviour of nonexpert users of MyFireWatch, using eye-tracking technology to observe their use of the system. Non-experts between 20 and 80 years of age were able to use the online system to locate current fires and burnt areas. This validated the design. The study showed that younger users appeared more familiar with interactive map conventions that allowed them to search more quickly than older users. However, older users were able to substitute their prior navigation knowledge for some features. Using aggregated eye-tracking data for different areas of interest on the MyFireWatch interface, maps and fire information functions were viewed by participants the most. Areas on the interface containing menu bars and logos were viewed the least. This paper considers the usability for nonexperts of an interactive map designed to visualise the location of remotely sensed fires.
Publication: