Emergency management organisations are increasingly responding to trauma events in Australia and internationally. Australian Red Cross has undertaken research to develop best-practice guidelines to help organisations support communities before, during and after these distressing events.

Events in Australia and around the world have seen highly traumatic incidents played out in public places resulting in people witnessing injury and deaths in a violent manner. These events have a significant impact on communities as they challenge public norms, undermine perceptions of safety and provoke significant public grieving.

Such events don’t fit neatly into the traditional parameters of emergency management arrangements. They can also attract a lot of media attention and have previously become highly politicised.

While emergency management organisations have been activated to respond, there is a concern that more or different support may be needed. Businesses and community groups are often left wondering what they can do to support their communities in the wake of such events.

To address this concern, Australian Red Cross investigated similar situations and current good practice. This followed incidents such as the disappearance of Malaysia Airlines flight MH370 (2014), the Sydney Siege (2014), the tragedy at Dreamworld theme park in Queensland (2016) and an attack on pedestrians in Bourke Street in Melbourne (2017).

Working with expert advisors, Dr Rob Gordon, Professor Louise Harms, Kate Fitzgerald and Dr Anne Eyre, Red Cross has developed a set of psychosocial guidelines based on current international practice. The guidelines draw on existing literature and have been tested with 300 practitioners, policy makers and researchers from around the world.

The aim of the guidelines is to inform the future work of Red Cross and to support a range of decision makers, practitioners, policymakers and leaders striving to assist their communities. 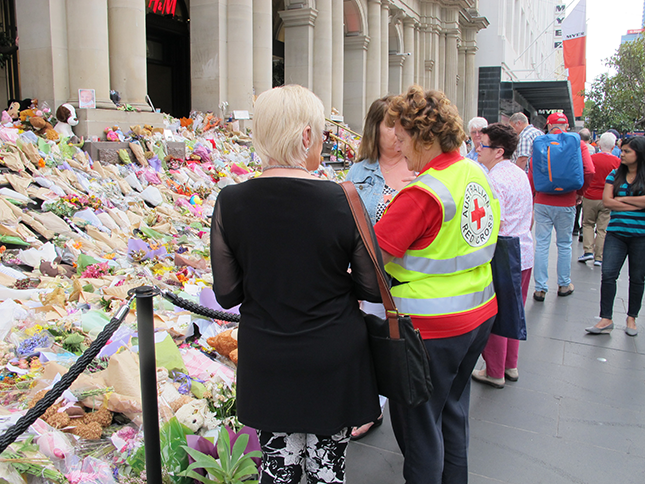 On 20 January 2017, a car was driven into pedestrians in Bourke Street, Melbourne, killing six people and injuring 30 others leading to weeks of public morning and a sea of flowers. Image: Zayne D’Crus

The value of the guidelines lies in their contribution to operational planning and are deliberately broad in order to assist all organisations in their approaches to preparedness, response and recovery when dealing with collective trauma events. The guidelines complement the range of support material already available and in use and are not designed to be used as a stand-alone operational guide.

The guidelines can be found on the Red Cross website:
www.redcross.org.au/get-help/emergencies/resources-about-disasters/help-for-agencies.

Lessons Management Forum, Nicola Laurence, AFAC In August 2018, practitioners from Australia and New Zealand gathered in Melbourne for the third annual Lessons Management Forum, hosted by AFAC and the Australian Institute for Disaster Resilience. Building on the success of recent years, the program focused on effective coordination and evaluation of lessons management as areas for growth; from the grassroots level through to high-level policy.
Publication: