Implementation of the Sendai Framework for Disaster Risk Reduction in Australia

Global momentum to reduce the impact disasters have on communities has gathered pace. In line with this momentum, Australia is taking meaningful steps to implement the Sendai Framework for Disaster Risk Reduction 2015-2030.

The Sendai Framework fosters a more collaborative, innovative approach, including targets that promote all-of-society and all-of-states engagement. It also recognises that the impacts of disasters affect people in many ways: not just economically but also in terms of health, education, society and the environment. Strong disaster risk governance is central to managing disaster risk effectively because it encourages collaboration towards disaster risk reduction and sustainable development.

The Australian Government is actively engaging in regional and global platforms to share best practice, discuss lessons leart and encourage participation across all sectors to implement the Sendai Framework. In July 2018, Australia sent a delegation to the Regional Platform, the Asian Ministerial Conference on Disaster Risk Reduction in Mongolia. The meeting will result in a number of positive outcomes on disaster risk reduction, including the ‘Ulaanbaatar Declaration’, a 2018-2020 Action Plan for the Asia region, and voluntary commitments.

In 2017, the Minister for International Development and the Pacific, Senator Concetta Fieravanti-Wells, led an Australian delegation to the Global Platform for Disaster Risk Reduction in Mexico. The Minister delivered Australia’s National Statement, which highlighted Australia’s role as a responsible international partner in disaster risk reduction and resilience and demonstrated Australia’s willingness to share its own domestic experiences and knowledge in disaster risk reduction.

At the Ministerial Roundtable on Integrating Disaster Risk Reduction into Overall Economic Planning, the Minister shared Australia’s experience with Tropical Cyclone Debbie in Queensland and New South Wales to illustrate Australian Government investments that had mitigated the impact of the cyclone, as an example of sound economic planning leading to reduced disaster risk exposure. 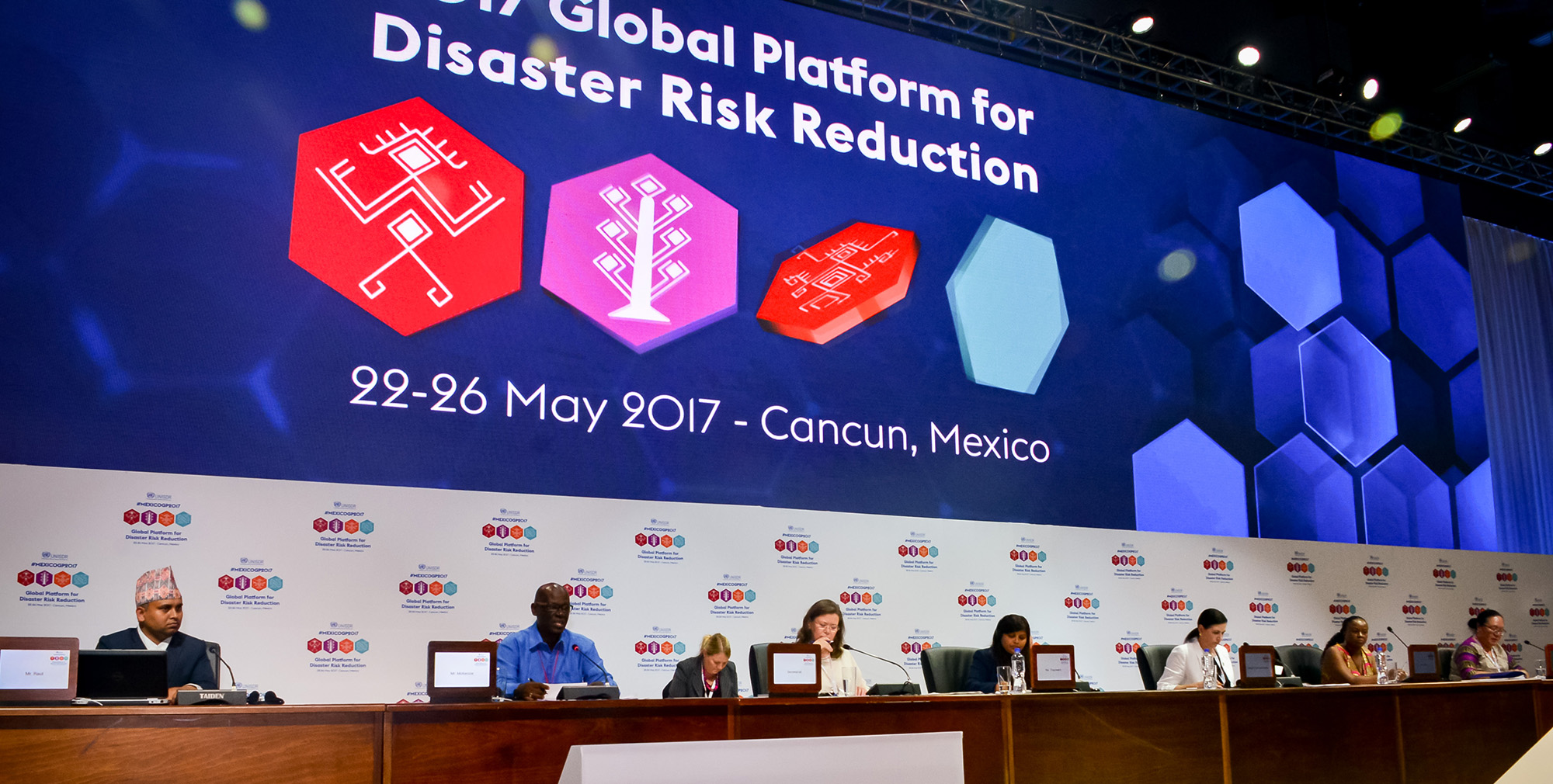 The Minister for International Development and the Pacific, Senator the Hon Concetta Fierravanti Wells, at the 2017 Global Platform in Cancun, Mexico. Image: Emergency Management Australia

The Sendai Framework offers a set of guiding principles for all levels of government and non-government sectors to draw from in the design and ongoing implementation of policies, programs and practices. The Department of Home Affairs is leading Australia’s reporting against the Sendai Framework and driving implementation at a national level. A National Resilience Taskforce within the Department of Home Affairs is leading national efforts to reduce the impacts of natural hazards on our critical infrastructure, economy, cities and regions. It will lead the development of a five-year national disaster mitigation framework with states and territories and other key sectors. The framework will deliver a coordinated national approach for reducing existing risk, preventing future risk and delivering improved disaster risk information.

All jurisdictions are working together through the Sendai Framework Working Group to deliver a national roadmap for implementation and reporting against the framework. The roadmap will establish a set of nationally appropriate indicators based on the United Nations’ 38 global indicators to measure progress against the Sendai Framework’s seven global targets. This will give Australia a long-term view on the effect of policies and programs, and how to best mitigate and respond to disasters.

Importantly, the roadmap will translate the Sendai Framework priorities into existing Australian disaster resilience and emergency management policies and complement already established and matured initiatives within the states and territories. It will also consider a National Platform for Disaster Risk Reduction to support all stakeholder and multi-sectoral collaboration on disaster risk reduction.

Australia is already taking steps to reduce the risks associated with bushfires. Australia is currently trialling a prototype of a next generation National Fire Danger Ratings System (NFDRS). The prototype of this new system is a significant advancement on the 60-year-old technology currently in use. It improves how we predict fire weather, measure the seriousness of burning conditions and understand the threat of fire to life, assets and the environment. When put into full production, the NFDRS will significantly improve how we understand, plan for and respond to bushfires. The NFDRS is also designed to help fire authorities accurately communicate bushfire risk to the community, enhance agency readiness and preparedness, and contribute to risk management prevention (including input into building standards and planning controls). While it is still in its infancy, the NFDRS represents an ongoing scalable program of continuous improvement, involving multiple government departments and emergency management agencies from all jurisdictions with support from research organisations and universities.

Effective investment in disaster risk reduction relies on strong partnerships and collaboration to produce evidence-based and all-of-sector policy and planning.

To achieve this, it is beneficial to strengthen the networks of communities and organisations and work with research groups and communities-of-practice to build a strong interface between research, disaster risk information and decision-making.

Promoting awareness of how disaster risk is created and opening dialogue on potential reduction strategies will lead to a greater understanding and interest by organisations and members of the community. Successfully driving the principles of the Sendai Framework requires collaboration and commitment from all levels of government, organisations, communities and individuals.

What is the Sendai Framework?

The Sendai Framework is the global blueprint to reduce disaster risk. The expected outcome over the next 15 years is to realise ‘the substantial reduction of disaster risk and losses in lives, livelihoods and health and in the economic, physical, social, cultural and environmental assets of persons, businesses, communities and countries’.

Building on the progress made under its predecessor, the Hyogo Framework for Action 2005-2015: Building the Resilience of Nations and Communities to Disasters, the Sendai Framework places a strong emphasis on disaster risk management as opposed to disaster management.

To achieve its outcome, the Sendai Framework outlines four priorities for action:

Get Ready: a model for deaf community leadership and preparedness – Genevieve Roberts The Deaf Society Get Ready program began as a one-year project under the Natural Disaster Resilience Program. Get Ready is the implementation of recommended interventions arising from university research into disaster resilience in the deaf community.
Publication: