Experiences of individuals with physical disabilities in natural disasters: an integrative review

People with physical disability are two to four times more likely than the general population to die or sustain injuries during disaster events (Fujii 2012). The risk to this group is greater than the general population due to the effect of impairments (e.g. motor, sensory, cognitive-linguistic) and activity limitations (e.g. mobility and communication) on their ability to prepare, evacuate and recover from disaster events (Rooney & White 2007, World Health Organization 2013, Zakour 2015). People with physical disabilities disproportionately experience poverty, lack of social support and structural exclusion. This increases their vulnerability during disaster events (Smith & Notaro 2009).

Evacuation planning must take into account the specific needs of individuals with physical disabilities. This includes mobility assistance, accessible evacuation shelters and reliable power sources to run equipment such as power wheelchairs and communication devices. Disability inclusive disaster risk reduction (DiDRR), is a relatively new phenomenon. The Sendai Framework for Disaster Risk Reduction 2015-2030 (UNISDR 2015) is the first international framework to include the needs of people with disabilities.

Research on DiDRR is predominantly from North America and Asia and focuses on disaster preparedness and response (Llewellyn 2016). Encouragingly, DiDRR programs are being implemented in a number of locations in Australia (University of Sydney 2015). However, there is limited research available that investigates the lived experience of people with physical disabilities in natural disasters. This literature review found no studies that explore the lived experience of people with disability within the Australian context.

The search included grey literature and examining reference lists of the articles retrieved. The search was limited to studies written in English using adult participants. No limits on year were applied. Physical disability was defined as neuro-musculoskeletal, sensory or cognitive-linguistic conditions. The review was conducted in three stages; by title, abstract and full text. The inclusion criteria applied was as follows:

Exclusion criteria included research focused only on the preparedness of people with physical disability in a disaster with no mention of an actual disaster event. 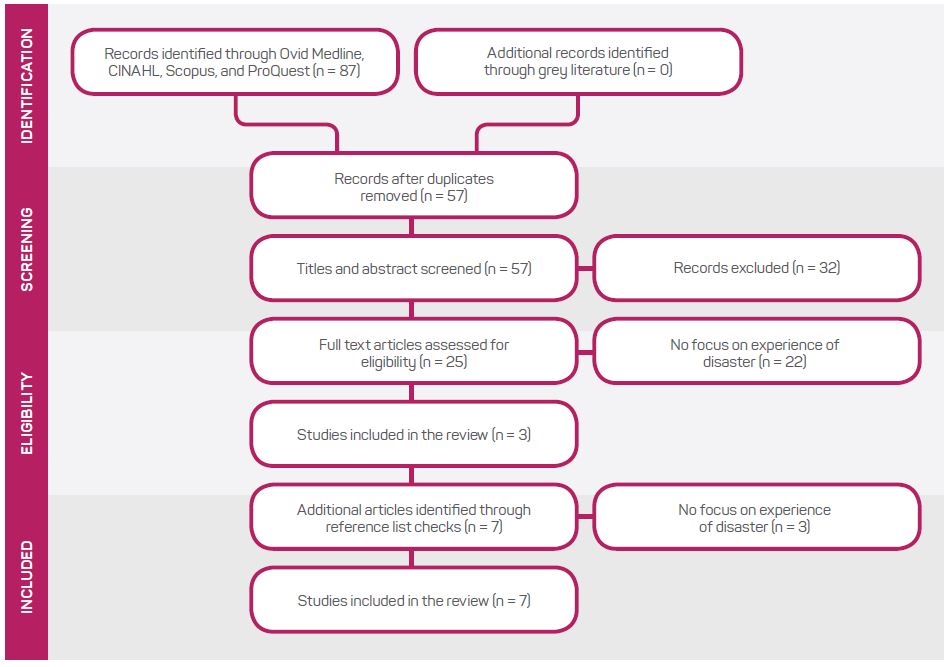 Data quality varied across the seven articles with some reporting potential sampling bias (Fox et al. 2010, Rooney & White 2007, Takahashi & Kitamura 2016) or a small sample size (Duyan & Karatas 2005). Experiences of people with physical disabilities and disability organisation staff were combined in one study (Fox et al. 2010), clouding the disability experience of disaster. Research design rigour was only reported by Fox and colleagues (2010), Rooney and White (2007) and Takahashi and Kitamura (2016). There was potential recall bias for all studies reviewed. Table 1 provides a summary of the articles used in this study.

Table 1: Experiences of people with physical disabilities during natural disasters.

Three overarching themes were identified across the studies in relation to the experience of people with disabilities during natural disaster events. Themes were:

The challenges faced by people with physical disabilities in natural disasters

People with physical disabilities are less likely to evacuate from their home and wait longer to do so due to a lack of accessible transport and concerns that evacuation shelters will not accommodate their needs (Gerber, Norwood & Zakour 2010, Rooney & White 2007, Takahashi & Kitamura 2016, Van Willigen et al. 2002). Potential loss of independence in an evacuation shelter is particularly pertinent for those with visual impairments. These people express concerns about the safety of guide dogs, needing assistance with reading, writing, orientation and mobility in an unfamiliar environment. They also may experience difficulty accessing their support community due to changes in the physical environment from structural damage and debris (Good, Phibbs & Williamson 2016). This can cause disruption of routines and lead to isolation when medical care, the supermarket and family and friend’s homes cannot be accessed (Good, Phibbs & Williamson 2016).

Lack of support to prepare, evacuate and recover from a disaster event is a recurrent theme across the literature reviewed. Absence of family support is a disadvantage and, for some, their social network may be other people with disabilities who may not be able to assist in an emergency (Fox et al. 2010). A lack of social support can exacerbate isolation and trauma, and recovery from an event can be slowed (Good, Phibbs & Williamson 2016). For those requiring personal carers, absence of their caregiver during a disaster event, whether sheltering in place or in an evacuation centre, presents significant challenges (Takahashi & Kitamura 2016).

A lack of communication from authorities poses a threat to people with physical disabilities during natural disasters. Disaster relief personnel need training in accessibility issues and to have a good knowledge of accessible evacuation options. Emergency announcements need to be accessible to those with vision or hearing impairment (Rooney & White 2007, Van Willigen et al. 2002). While radio broadcasts are regarded as the most accessible sources of information during a disaster, visually impaired people in Christchurch reported that radio broadcasts were of poor quality as misinformation was spread in the wake of the earthquake in 2011. This caused significant fear (Good, Phibbs & Williamson 2016).

The ability to manage one’s own health condition is a significant challenge during and after a natural disaster (Fox et al. 2010, Good, Phibbs & Williamson 2016, Takahashi & Kitamura 2016). For people with cervical SCI for example, the ability to manage urinary and faecal control and pressure injuries while in an evacuation centre may be difficult. Regulating body temperature without air conditioning during a power outage or difficulty accessing medications cause significant anxiety (Takahashi & Kitamura 2016).

Impacts of natural disasters on people with physical disabilities

People with physical disabilities have reduced ability to prepare, evacuate and recover from disaster events. Experiences of decreased self-esteem, increased anxiety, emotional trauma and diminished personal safety are common (Good, Phibbs & Williamson 2016, Rooney & White 2007, Duyan & Karatas 2005). A lack of evacuation planning can result in people with physical disabilities being left behind during an evacuation, resulting in significant emotional trauma and potential loss of life (Fox et al. 2010, Rooney & White 2007). Additionally, property damage may prolong the recovery process and have negative effects on standards of living for people with disabilities. Studies by Van Willigen and colleagues (2002) showed that property damage was 50 per cent more likely for households with a disabled member following hurricanes in the US. The financial burden of this was almost four times that of other households. The study indicated that the consistently lower incomes of people with disabilities represents a significant barrier to recovery after disaster events.

Factors reported to enhance the resilience of people with physical disabilities to natural disaster events include disaster preparedness by individuals, communities and organisations (Fox et al. 2010, Gerber, Norwood & Zakour 2010, Rooney & White 2007, Takahashi & Kitamura 2016, Van Willigen et al. 2002). Preparedness measures include storing necessary items such as food, water, information devices, medications and essential items for a caregiver. Having an evacuation plan, pre-registration for emergency assistance, self-assessment of needs during a disaster and knowledge of a safe and accessible place to evacuate to, greatly improves preparedness. Having strong personal networks also helps with preparedness, evacuation and recovery post-disaster. This includes family, friends, disability organisations and specialised transport networks for people with a disability. For those with severe physical disability and high-care needs, having reliable caregivers during a disaster greatly reduces their vulnerability (Takahashi & Kitamura 2016).

The results of the review show there are limited studies into the disability perspective of disaster events and these studies are based on events that occurred outside of Australia.

Throughout the literature, a key finding was that people with physical disabilities face challenges during natural disasters due to individual, societal and environmental factors such as loss of independence, lack of evacuation support and difficulties managing their health conditions. These challenges negatively affect preparedness, evacuation and recovery from these events. The long-term effects of natural disasters are felt through emotional trauma and the financial burden of property damage that can prolong recovery and decrease standards of living for this vulnerable group.

Encouragingly, the literature highlights factors that enhance resilience to disaster events with a strong focus on strengthening support networks, adaptation and disaster preparedness. Participants attest to the empowerment felt as a result of educating their peers on lessons learnt from their experience. There is a call to include people with disabilities in disaster planning to take advantage of their knowledge of how to accommodate their special needs. While the Sendai Framework for Disaster Risk Reduction 2015-2030 (UNISDR 2015) promotes active involvement of people with disabilities and their organisations in disaster planning and policy development, there is no clear indication in the more recent literature reviewed that this level of inclusion is occurring. A greater focus on disability inclusiveness and investment in social capital within disaster-prone communities will enable greater participation in society and help to build resilience to future disasters.

Despite extensive searching, it is possible that a study on the experiences of individuals with a physical disability in natural disasters may have been omitted. Disaster research is a multidisciplinary field and studies are published in a variety of journals. Studies in languages other than English were not accessed for this review.

We gratefully acknowledge the input of study participants. This project was fully supported by the College of Healthcare Sciences at James Cook University.

Good GA, Phibbs S & Williamson K 2016, Disoriented and immobile: the experiences of people with visual impairments during and after the Christchurch, New Zealand, 2010 and 2011 earthquakes. Journal of Visual Impairment and Blindness (Online), vol. 110, p. 425.

Jennifer Quaill is the Assistant Director of Physiotherapy for Rehabilitation at the Gold Coast University Hospital. She specialises in neurological rehabilitation and is actively involved in research into disability inclusive disaster management.

Associate Professor Ruth Barker is a researcher, educator and clinician with interests in neurological rehabilitation, innovative models of clinical service delivery for rural, remote and Indigenous communities and building research capacity across Allied Health disciplines. She has been instrumental in the design, piloting, implementing and evaluating of community rehabilitation services in Townsville and Mt Isa with outreach services to surrounding communities.

Associate Professor Caryn West has a diverse research portfolio within nursing and public health through her professional roles and awards including an Early Career Fellowship with the National Health and Medical Research Council and directorship of the World Health Organisation Collaborating Centre for Nursing, Midwifery Education and Research Capacity Building. Her areas of research include disaster management, nursing and midwifery education, capacity building and alcohol-related injuries and domestic violence in Australian Indigenous communities.

A formative evaluation of the Triple Zero Kids’ Challenge Teacher’s Guide – Dr Briony Towers and Mark Whybro The Triple Zero Kids’ Challenge is an online, interactive safety game and a mobile application. It provides young children in Australia with essential information on how to identify and report legitimate emergencies by calling Triple Zero (000). As a companion resource, the Triple Kids’ Challenge Teacher’s Guide provides educators of lower-primary school students with a series of structured learning activities to consolidate and extend the key messages of the online game. To ensure that the learning activities in the guide are both feasible and appropriate for the target age group, a formative evaluation was conducted with lower-primary students and their teachers.
Publication: