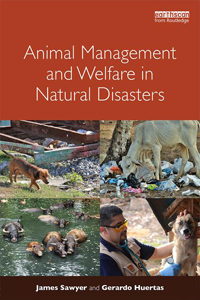 For the first time, an authoritative text on the relationship between humanitarian response systems and animal welfare has been published. Traditionally, texts have focused on animal emergency management in the United States and other developed countries.

Sawyer and Huertas share their 55-plus years of collective professional experience with high-profile organisations such as World Animal Protection and the British Animal Rescue and Trauma Association. Their mixed experience covers responding to animals affected by disasters such as Cyclone Haiyan, Cyclone Pam, Haiti Earthquake, Indian/Asia Tsunami, Mongolian Dzud and war zones.

The authors have qualifications in emergency planning, disaster management, biology, human resources, law and geography. However, neither of these experts are veterinarians so they provide a more holistic approach to the topic. This gives the reader a significant body of knowledge filled with anecdotes and published studies that supports an animal-inclusive approach to disaster and humanitarian response. Doing so benefits the animals as well as humans involved.

The book is full of examples and covers:

Examples included in the book that were of particular interest include the application of international conventions and agreements to protect animals (such as the United Nations Sendai Framework for Disaster Risk Reduction 2015–2030), the issue of aid dependency and ‘do no harm’ in the context of animal-related interventions, the negative consequences of focusing on livestock insurance and re-stocking, the post-flooding impacts on pastures (mineral deficiencies), the importance of engagement and collaboration by governments with non-government organisations in animal disaster response and the gender issues arising from negative impacts on livestock particularly in developing countries.

The book states that New Zealand has a guideline for animals in emergencies, however, this guideline was never published. The book’s section on technical animal rescue is light in content and might not ensure operational safety, though further training options are noted. Inclusion of the International Search and Rescue Advisory Group First Responder training package would have been useful. In addition, a short commentary on the Code of Conduct for International Red Cross and Red Crescent Movement and NGOs in Disaster Relief and how it could apply to animal-focused responses would have been worthwhile.

The purists of disaster research may object to the book’s title that refers to ‘natural disasters’. For many the term ‘natural disaster’ has become a misnomer given there is nothing natural with a human system interacting with a natural system. However, it would appear the title was decided upon to better relate to a readership that may not have a background in emergency management.

This book is easy to read and is full of examples that advance the compelling argument that animal welfare is a critical cross-cutting theme in humanitarian development and response. The book’s style and content make it a must read for those who want to help communities to become more resilient anywhere in the world.

When do local governments reduce risk? Knowledge gaps and a research agenda, Benjamin Beccari, Monash University, Melbourne, Victoria Local governments are important actors in achieving the targets of the Sendai Framework for Disaster Risk Reduction 2015–2030 (UNDRR 2015). While they play a key role, their level of action on disaster risk reduction varies substantially and the evidence base to explain this variation is limited. This paper reviews three strands of research that improve this evidence base and recommends further research.
Publication: