Lessons from USA summit can help protect animals and people

Emergency management has come a long way over the past decade in recognising the intrinsic link that humans have with animals. Including consideration for animals throughout the phases of risk reduction, readiness, response and recovery has significant benefits for animal welfare and also for the safety and wellbeing of humans.

In December 2019, ‘like minds’ came together at the biennial National Alliance of State Agricultural and Animal Emergency Programs (NASAAEP) Summit in Bellevue, Washington. The summit attracted career and volunteer practitioners involved in animal management during emergency events from animal welfare organisations, state agricultural departments, the veterinary, military and academic sectors as well as training organisations. The NASAAEP is the only conference of its type and is an ideal forum at which to share ideas to improve animal management. The inclusive and open nature of the summit encourages participation and networking to build critical relationships. The all-stakeholder operating model of NASAAEP would be beneficial to replicate in Australasia.

Dealing with animals during times of disaster is not unique to the United States of America (USA). Other countries, including Australia and New Zealand, lack personnel appropriately trained in response capability for animals and ambiguity exists about animal decontamination responsibilities. There is also a deficiency of response-information sharing (incident management and animal registration platforms) and an absence of lessons management for animal response.

The USA has made major advances in these areas including the federal Pet Emergency Transportation and Standards Act of 2006 that has caused a positive cultural shift in companion animal emergency planning and funding. The USA has led the way in championing pet-friendly shelters, in particular, carrying out trials proving the effectiveness of co-habitated evacuation shelters where animals and people share living space. In New Zealand, the concept of co-located shelters (animals and people are in separate but close living facilities) have been established in Wellington but are largely overlooked elsewhere. The USA is moving away from animal-only shelters during evacuations in order to facilitate animals being cared for by their owners.

NASAAEP speakers shared their experiences of California’s deadliest and most destructive wildfire in history, the Camp Fire of 2018. In particular, they examined the effectiveness of different emergency animal sheltering options. They found animal-only shelters to be unsustainable and these could not be scaled up for large numbers of animals; in the Camp Fire this involved an evacuation of 52,000 people and 4000 animals. A further 6000 animals were left in-situ with feed-in-place provisions.

The speakers found that animal-only shelters generally offered less individual animal care, attention and exercise that resulted in poor animal welfare outcomes. Conversely, shelters offering co-location and co-habitation provided higher levels of enrichment and care for animals. It also offered a sense of purpose for owners to control animal diets to avoid sudden changes in food that might result in diarrhoea. The paper-based animal registration systems used failed when managing large numbers of animals. Other complications occurred due to unclear handwriting as well as volunteers being unfamiliar with the forms.

Speakers such as Dr Dick Green and Tim Perciful from the American Society for the Prevention of Cruelty to Animal (ASPCA) detailed the significant cost and staffing requirements of animal-only shelters when compared to co-located and co-habitated shelters. In one county, during Hurricane Harvey in 2017, the county judge ordered that a co-located shelter be established for animals and people, possibly reflecting a cultural shift in thought that pets are very important to people and that saving animals can save human lives.

Other advances in the USA include rural communities at risk of wildfire having responsibility to prepare for such events. They have rallied together to create fire-safe evacuation zones, which are areas that have been cleared of vegetation and they have areas prepared where large animals can be safely evacuated to. This is similar to the concept of ‘lily pads’; areas of elevated ground that are constructed to protect large animals during flooding. 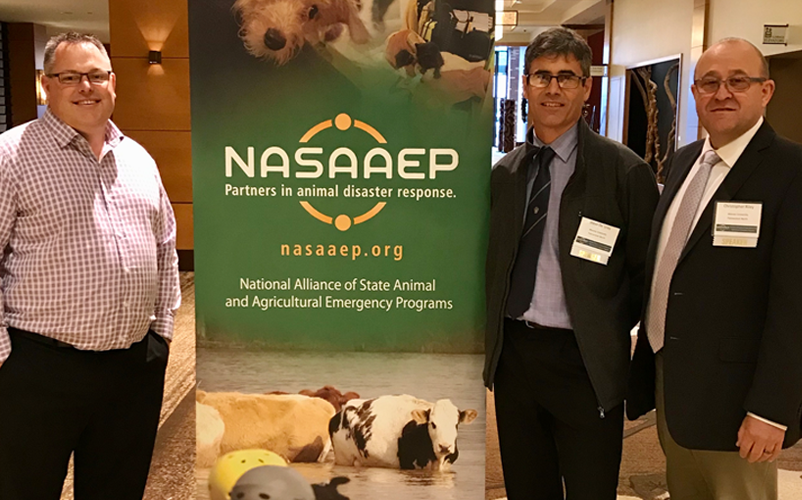 Summit participants from the University of Otago and Massey University gave presentations on lessons management and stress injuries, respectively, with the former selected as an encore presentation. Other New Zealand technological accomplishments were presented, including a GIS-based companion animal population calculator and the successful application of the D4H incident management platform for animal response coordination and animal registration by Animal Evac New Zealand.

The ASPCA provides an innovative and collaborative response partnership model that encourages animal welfare groups to come under its auspices during disaster response. This is achieved via a memorandum of understanding that makes funding, equipment and training available for high levels of integration, coordination and improved resilience. This collaborative style of leadership undoubtedly has improved the effectiveness of animal disaster response experienced in the USA and adopting this approach within Australasia could yield similar benefits.

The author acknowledges the support of the University of Otago, the Bushfire and Natural Hazards Cooperative Research Centre, the American Society for the Prevention of Cruelty to Animals, International Fund for Animal Welfare and Animal Evac New Zealand for their support in making attendance of the summit possible.

For a video recording of the presentation given on lessons management, visit www.animaldisastermanagement.blog.

Is emergency planning for infants and young children adequate? Associate Professor Karleen Gribble, Western Sydney University Emergency plans should account for the special needs of vulnerable groups to mitigate the risks they face and to provide appropriate assistance. Australian research has examined the vulnerability of children, particularly infants.
Publication: