Book review: the heat of the moment 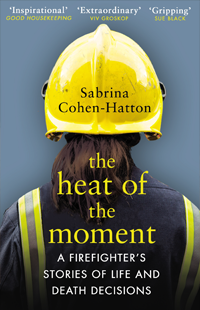 Racy and engaging from the get-go, Sabrina Cohen-Hatton compels her readers to speed through these pages at the rate of a responding fire truck. With expert deftness she builds the intensity from surviving as a homeless Welsh teenager to the newly appointed Chief Officer of West Sussex Fire and Rescue. The heat of the moment continues to increase in momentum as Cohen-Hatton draws us closer into the centre of incident command to stand with her as she faces the most difficult and traumatic life-and-death incident decision-making. From here, she expertly manoeuvres readers into a position that creates a sense of imperative and immediacy; fulfilling her stated purpose to show the ‘human side of firefighting’.

Despite this focus she manages to inject the odd divergence to her PhD research on behavioural neuroscience. Her findings changed UK national policy, where the concept of ‘decision control’ is now embedded.

Put simply, this is a rapid mental check between making a decision and enacting it. Cohen-Hatton’s research found this is where most human error occurs. Her goal is to support effective incident command and safety management. Combining the science (which she is well qualified to mention) and the emotional aspects of being a firefighter may not work for some, but it adds the solidifying dimension of expert voice to the strings of incident memoirs. On this note, a range of incident categories is incorporated without neglecting the emotional effects of being a firefighter; the adrenaline, stress and PTSD, all of which are tackled head-on in a raw and honest appraisal of her own experience. This has a normalising effect for the gamut of emotions experienced by emergency responders, not the least being survivor guilt and relief that were formative in her development as a firefighter and scholar.

This is an easy and gripping read, in part due to Cohen-Hatton writing in the first person with carefully simplified language. Footnotes are provided for the uninitiated, making this an accessible read for friends, family and other interested people who may have wondered what the working life of a firefighter is like. It is also a managerial textbook in palatable disguise because it combines autobiography with subtle teaching on managing difficult people, situations and experiences.

Cohen-Hatton has the luxury of interpreting people and saying it like it is because this is her book, not a journal article nor a training manual. As such, the medium works well, enabling her to write a thinly disguised memoir while providing accessible training in an attractive format to the firefighter mentality, which calls for fast-paced action and a rhythm that goes beyond the mundane.

There are many subtle messages in this book that, if preached at point blank range, would have fallen on hardened hearts. However, provided in the guise of memoir and delivered in the tone of confidentiality, they are palatable and consumable. This is a very clever strategy that possibly Cohen-Hatton herself does not realise she has employed.

Cohen-Hatton says sharing her early years was the most difficult thing she’s ever done, but when reading her book I had to question this. Some of the incidents in the book are big and bloody and Cohen-Hatton doesn’t shield her readers from the agony of the victims nor the angst of being in command.

This book is a poignant reminder that life is unpredictable and you can make a difference. It will make an excellent gift for partners, family and friends of emergency service personnel who’ve always wanted to know more about the job and what pressures their people face. Reflecting on her own past and the journey she has taken, she is keen to say her one big message is not to prejudge people. I think the one big message is not to judge Cohen-Hatton.