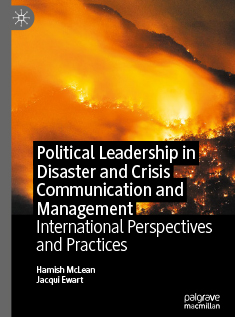 For many years I have presented to emergency managers on the politics of emergencies. When I discussed this topic in past years, politicians were considered by many as irrelevant to their work. Others saw politicians as a distraction, diverting resources and getting in the way of the professionals.

However, since Australia’s catastrophic bushfires of 2019–20, followed closely by the COVID-19 pandemic, it is now clear to emergency managers that crises and disasters, and the accompanying media conferences, are political events that can make and break governments.

McLean and Ewart’s book, Political Leadership in Disaster and Crisis Communication and Management: International Perspectives and Practices, is very timely. It is written as a practical resource for politicians and their staff as well as for emergency managers.

The strength of the book is that as well as being practical, it is grounded in the theory and history of political and crisis communication. The authors criticise emergency managers who have no time for the role of politicians, pointing out that ‘[d]isasters happen when humans and hazards cross paths. Politics is integral to the workings of society at all levels, so we argue that today disasters are political events.’ They also observe that the ‘presence of political actors who have made no effort to learn disaster management, or build community resilience, should ring alarm bells for emergency managers as a sign that more trouble is on the horizon when calamity strikes.’

The chapters analyse the different roles played in crisis communication across government. They cover the range of challenges faced by emergency managers, public servants, ministers and their officers. It has a useful section on the challenges emergency managers face when dealing with political demands including organising visits for politicians. It also has a separate chapter on ‘Minding the Minders’, which covers the issues that arise in the emergency management context from the increasing power of ministers’ offices, in particular, media advisors.

The book includes 2 examples to illustrate best and worst performance. The first is US President George W Bush and how his mishandling of Hurricane Katrina destroyed what was left of his political reputation (following on from his mismanagement of the Iraq War). It also illustrates why politicians and their media advisors focus so much on image. Political strategists called the photograph of Bush peering down from an aircraft on the destruction below as ‘among the most damaging’ of his presidency. The second is the positive example of former Queensland Premier Anna Bligh and the 2010–11 floods.

In the final section of the book, McLean and Ewart outline what they see as best practice. Here they detail their ‘tandem information model’. This was inspired by the approach the Queensland Government took during those floods. The roles of the Premier and people managing the disaster were clear. In the model, the necessary elements in messaging are: ‘leadership (operational and political), empathy (political) and directions and actions (operational)’. While Bligh focused on empathy and compassion, the Police Commissioner led on operational issues. All the actors kept to their roles.

This book should be read not only by emergency managers but also by political staffers. It would be useful for every minister with emergency responsibilities to go through it too as part of their induction to office. The response to the pandemic has not dated this book. In fact, the opposite is the case, as recent events have confirmed the authors’ findings. Good political staffers often have the influence to make a real difference as a bridge between emergency managers and ministers. Every ministerial office should get this book, and at least one ministerial adviser should absorb its contents, so that the mistakes of the past are avoided, and the good lessons are implemented.