An integrated system to protect Australia from catastrophic bushfires

Australia has experienced catastrophic bushfire conditions that exceed known firefighting technologies, leading to significant ecological, economic, health and social costs. We need a novel approach that harnesses modern technologies and that is successful in reducing the risk of large-scale bushfires under extreme conditions.

During the 2019–20 bushfire season, extensive areas were burnt largely because of an inability to detect and extinguish ignitions in remote areas before the fires spread and became uncontrollable. A large proportion of these fires were ignited by lightning strikes. The Australian National University (ANU) is undertaking advanced interdisciplinary research to develop an innovative national system to detect bushfires as soon as they start and extinguish them within minutes.

In collaboration with ACT Parks and Conservation Service and the ACT Rural Fire Service, ANU has developed an integrated research initiative encompassing 6 programs from fire prevention to suppression as illustrated in Figure 1.

Program 1: Prevention and risk reduction aims to evaluate the effectiveness of ecological fire-risk reduction strategies and develop the next generation of fire-risk models. Australian development of the ANU OzFuel infrared smallSat mission addresses the recommendations for efficient national monitoring of fuel conditions, which are common to independent national and state inquiries while complementing national and international missions dedicated to rapid fire detection. This is the first step towards a coordinated effort to monitor eucalypt fuel conditions from space. OzFuel will provide critical bushfire earth observation data to support increased bushfire situational awareness and preparedness of government, frontline organisations and communities. 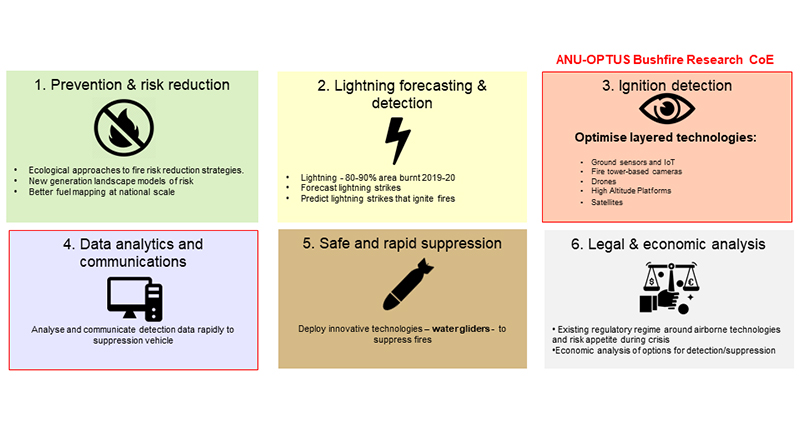 Program 2: Lightning forecasting and detection aims to develop capacity to rapidly identify which lightning strikes within an individual storm are most likely to cause an ignition. This allows for faster responses to fire detection and suppression. This capability relies on a revolutionary approach to both measuring and characterising lightning strikes and locating them accurately. Extensive research will be undertaken on the role of short- and long-term live and dead fuel moisture content together with other key factors that affect the probability of ignitions.

Program 3: Ignition detection is the core work being done by the ANU-Optus Bushfire Research Centre of Excellence, which is developing an optimised, integrated, layered, hi-tech solution to detect small fires. In the case of early fire detection, there is currently no single remote sensing platform that can do the job of surveying vast areas and detect a small fire. Geosynchronous equatorial orbit (GEO) satellites provide surveillance across Australia but may not identify small ignitions given current spatial resolution. Low Earth Orbit (LEO) satellites can detect smaller fires but only image the same location twice a day, at best. Optical and thermal detectors on both GEO or LEO satellites cannot ‘see through’ clouds. Drones have dynamic coverage and can be directed to high-risk areas, detect smaller fires than satellites and fly below cloud cover. Cameras on towers and on-ground sensors have limited spatial coverage per camera but can be strategically located in areas of elevated risk or conservation value. Given the advantages and disadvantages of each of the approaches, an approach that combines all these detection options is required for successful ignition detection.

This year, ANU has commenced the development and deployment of some of these technologies.

Program 4: A data analytics and communications platform aims to create actionable intelligence by integrating high-resolution fuel availability information into the RedEYE FirePrep decision-support tool. This will identify areas where new ignitions are likely to result in rapid fire propagation that affects built and natural assets. Together with Zirkarta, the ANU-Optus Bushfire Research Centre of Excellence is building a platform to communicate real-time fire-risk predictions to detection technologies (Program 3) so that detection focuses on areas of higher risk. Fire detection data will be integrated and shared with operations centres and field-based responders in real time through sophisticated mapping technologies. Fire detections will also trigger drones to provide visual verification of detected fires and collect data to power AI to improve the assessment of fire risk and individual detection technologies.

Program 5: Safe and rapid suppression addresses the need to rapidly extinguish ignitions by developing an innovative suppression vehicle. ANU has designed and prototyped GPS-guided water gliders to suppress fires when they are small. Current techniques for aerial firefighting involve low-level flying, which is dangerous and requires extensive preparation and coordination that can limit the speed of response. Most lightning ignitions occur late in the day when aerial suppression may be difficult due to safety and regulatory issues. ANU has developed a safe and innovative approach to water bombing from high altitudes that provides very rapid response and high accuracy and control over the spread of the water during the day and at night.

Simulation studies of the approach to rapid detection and suppression of lightning ignitions indicate that the system can manage thousands of strikes and hundreds of consequential ignitions over forests of southeast Australia. Specifically, a 4-hour snapshot of simulation of the use of 200 drones to inspect 4,200 lightning strikes over 24 hours (see Figure 2) revealed an average detection time of less than 12 minutes. Using 1,000 drones, a detection time of less than 6 minutes was achieved, allowing for rapid deployment of response teams. If technology allows us to increase the speed of drones and we can combine the identification of the highest risk events (e.g. dry lightning in high-slope locations with significant fuel loads), this will result in significant decreases in response time or the number of drones needed. 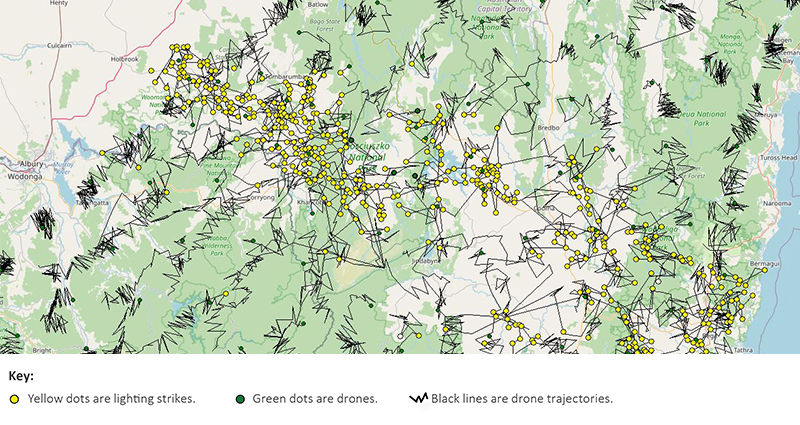 Figure 2: A simulation for rapid detection and suppression of lightning ignitions.

Major bushfires are costing lives as well as infrastructure and important ecosystems around the world. Human health is under threat from prolonged exposure to bushfire smoke. We urgently need innovative approaches to detect and rapidly extinguish bushfires before they become hazardous and widespread. Current approaches are not always effective, especially during extreme weather conditions. We must accelerate the development of technologies to meet this challenge well ahead of future catastrophic bushfire seasons.

EM-LINK sharing spatial data: an example of collaboration in emergency management - Brian Foo, Brenton Marchant, Naomi Withers In the midst of the 2019–20 summer bushfires, responders on the ground and in incident management teams were feeding information into state-based mapping systems. At the Crisis Coordination Centre (CCC) in Canberra it became apparent that a single, national feed showing bushfire boundaries - which did not currently exist - was urgently required.
Publication: