An archetypal perspective on delaying evacuation

Emergency services organisations have struggled to convince people confronted by a bushfire that leaving well in advance of the threat is the safest response.1 Since Black Saturday, the message that leaving is the safest option2,3 and that delay is potentially fatal4,5 has been increasingly highlighted. However, many people at risk from bushfire delay or intend to delay protective action.6

The Country Fire Authority (CFA) post-season data shows an unweighted average (2018–21) of 45.4% of respondents intending to delay to:

Our systematic review of the literature identified 6 reasons why people delay protective decisions in bushfires including purposive processes reflecting archetypal attitudes and response to bushfire.7,8

An archetype is a typical example of a particular kind of person because they have all their most important characteristics9 and is representative of a group. The archetypes present an array of perceptions and behaviours in relation to bushfire that have been previously identified in the literature. Applying an archetype lens allows a holistic assessment of factors that influence delay. Factors include risk and stakeholder perception, perception of the effectiveness of defending or leaving, bushfire experience and self-reliance.

The 2021 CFA post-season survey provided the data. It was a telephone survey of 900 randomly selected residents of extreme (VFRR) bushfire-prone areas in Victoria. A K-means cluster procedure10 of IBM-SPSS11 identified 7 archetypal groupings. Explanatory discriminant function analysis was used to demonstrate the validity of the clusters.10 Table 1 summarises the archetypes intended response to bushfire. 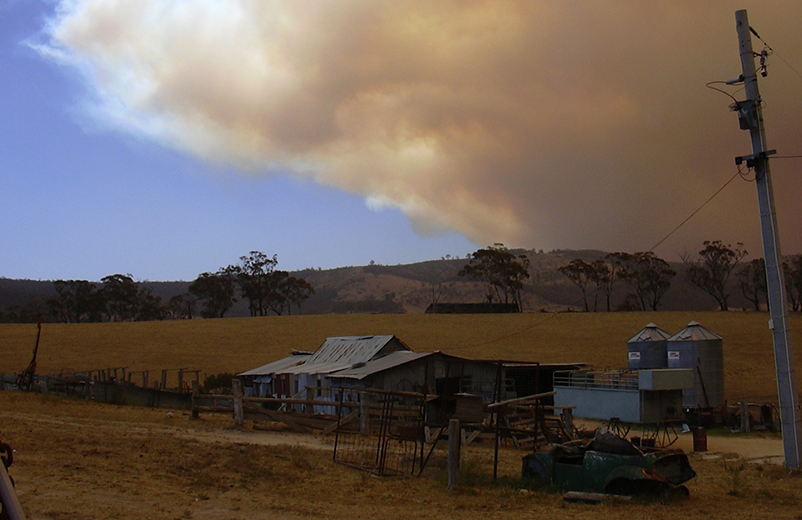 Each of the 7 archetypal groupings was consistent with previously identified archetypes based on people who had recently experienced bushfire.12 New insights were gleaned from those living in ‘extreme’ bushfire-prone areas who had not necessarily experienced bushfire. Given what we know about the archetypes, we can examine the reasons for their delay with greater focus and detail. We can interpret the reasons for delay. We ask: What does it mean for this archetype to: ‘Do as much as possible to try and protect your property but leave if threatened by fire, or ‘Wait to see what the fire is like…or ‘Wait for police, fire or emergency services to tell you what to do…?’

The Dependent Evacuator is unable to carry out protective action on their own due to age, disability or lack of resources. They believe they lack bushfire knowledge and capability, as does their household, their neighbours and the media. They are reliant on the fire services, whose knowledge and expertise they rate extremely highly. Fifty-three per cent of Dependent Evacuators delay their protective response to prepare their property so it can survive in their absence (53.1%) and assess the fire (25%) so they know help is required and wait for assistance (21.9%). Delay results from organising themselves and preparing property to leave, ensuring it is necessary to leave in recognition of the effort and dislocation involved and contacting and waiting for someone to assist them.

The Threat Denier believes there is no threat from bushfire and no likely impact on their property and consequently to themselves. They believe no protective action is required13 so, from their perspective, there is no delay. Fifty-eight per cent intend to delay their protective response, taking minimal actions around their property expecting there will be no threat (54.7%). They wait and see how the fire develops, expecting it will not pose a danger (26.7%) and expecting emergency services to assist but believing they will not need to turn up (18.6%).

The Community Guided interact with their networks including neighbours, members of their local bushfire group or influential others such as brigade members, to get information, discuss options and come to a shared view about the most appropriate response to the bushfire threat. They see these trusted sources as knowledgeable, informed and able to advise them about bushfire. They assess, share and act on these inputs as part of their process of cooperatively taking responsibility and deciding on an appropriate protective action. Thirty-seven per cent intend to delay their action, including 70% who cooperatively monitor, discuss, prepare and coordinate a community response until there is a mutual perception of a need to act. Twenty-three per cent jointly assess the fire. These processes take time and delays protective action.

Worried Waverers want to remain and defend. They extensively prepare their property and equip and train for bushfire fighting. But they believe their lack of experience leaves them highly vulnerable to failure. They worry that they will be unable to protect their home from destruction and themselves from injury or even death. They believe that others around them, including emergency services personnel, lack capability and are ill-prepared for bushfire and that they will not receive official warnings or assistance. They feel they are on their own and lack adequate knowledge, information and advice about bushfire. They waver between a determination to stay and use their knowledge and equipment to save their property and leaving to protect their personal safety. They are unable to select between these 2 highly valued outcomes and decisional delay14 results. Fifty-seven per cent delay their protective action to prepare to defend their property until they perceive the threat exceeding their preparation and capacity (53.6%), to assess the fire threat (39.3%) against their capability, or to get advice from the emergency services to resolve their uncertainty (7.1%).

Considered Evacuators intend to leave as soon as they are aware of a potential threat, well in advance of the bushfire, as the best way to protect their personal safety, which is a high priority over protecting their property. They characteristically plan and prepare in advance, including pre-packing evacuation bags, organising valuables and memorabilia, arranging pet transport and identifying safe escape routes. But the implementation of their plan may contribute to delay. Their plan may include monitoring information and warnings, gathering belongings and pets and preparing property for survival in their absence. Forty-nine per cent intend to delay, primarily as a result of pre-evacuation activities (62.8%), while assessing the fire threat (28.2%) or waiting for emergency services advice as part of their plan (9%). Feeling well-organised and needing to follow their plan may undermine a timely departure. Implementing the plan, including monitoring the fire, final actions to protect property and assessing the safety of evacuation routes, may delay leaving.

Experienced Independents are committed to property defence. They extensively prepare and equip. They have previous bushfire fighting experience and believe that they can succeed. But they recognise defence may fail due to the intensity of the bushfire, failure of equipment or the sudden incapacity or injury of the defender(s). They typically reassess risk and adjust their defensive strategy if the threat to personal safety becomes too great. Time spent in a failed defence represents delay for the Experienced Independent. Thirty-one per cent intend to delay primarily to assess the extent of the danger posed by the fire (57.1%) and to defend until the threat is too great (35.7%). Delay occurs through the Experienced Independent’s recognition that property defence could fail.

*Each subscript letter denotes a subset of Cluster Number of Case categories whose column proportions do not differ significantly from each other at the .05 level.

By applying an archetypal lens to the question of protective action delay, diffuse and seemingly unconnected factors, many of which are reported in the literature, can be drawn into a comprehensive and holistic picture of individual behaviour and response in bushfire.

Recognising the diversity of archetypal attitudes and responses in bushfire and delay as part of a process of purposive prioritising of action rather than indecisiveness, emergency services can better understand their audience and reimagine and adapt bushfire safety policy and programs. The objective should be to better meet the diverse needs of people at risk from bushfire, so their actions and decision-making enhances their safety, the safety of their household and of their community. Using an archetype lens can also improve policy and programs by:

Programs based on the archetypes need to be developed, implemented and evaluated. The CFA has started to integrate this research into its community safety approaches.15 Further research to refine and extend the archetypes is also required.