The increase in violence against women and the gendered effects of disaster are crucial to consider in emergency management planning, response and recovery, particularly in the provision of safe, accessible evacuation centres. The City of Casey partnered with Gender and Disaster Australia to develop a checklist and training to assist emergency management professionals incorporate aspects of gender into their work.

It all started with a question about a toilet. The emergency management team at the City of Casey wanted to know how to label toilets so as to be inclusive of all people in evacuation centres. Knowing the evidence of increased gender-based violence and inequalities during and post disasters, the toilet question was just the beginning. I am sure the team were not expecting my extensive questioning that was to follow. Questions like: Have you thought about women and girls who have their periods? What about bottle-fed babies; breastfeeding mothers? Have you considered the needs of transgender people and the LGBTQI+ community? What are you going to do if a woman has an intervention order and the perpetrator turns up to the same centre?

Resulting conversations revealed the gap between emergency management practices and how local councils incorporate gender into planning evacuation centres. Applying a gender lens ensures the different needs, strengths and vulnerabilities of women, men and gender-diverse people are considered, however, it is something that is often not prioritised.

I didn’t know the answer to the inclusive-toilet question and wanted to find resources to support the team in its planning. Instead of calling the local plumber, I contacted Gender and Disaster Australia and Research and Training Coordinator, Jaspreet Kaur, directed me to information about emergency relief centres (and toilets) in the Gender and Emergency Management Guidelines.1 However, a partnership with the City of Casey offered the opportunity to develop a comprehensive checklist specifically for evacuation centres. With Victoria’s new Gender Equality Act 20202 in place, this would be a perfect chance to apply a gender-impact assessment to meet legislation requirements.

Led by Gender and Disaster Australia, we formed a working group and conducted a desktop review. We built on the existing guidelines to create a specific checklist for ease of use by managers of evacuation centres. The checklist was developed into 3 sections after consultation and a peer-review process involving over 40 professionals from emergency management, the council, academia and community organisations. The checklist sections:

The City of Casey’s team piloted the checklist starting with a 2-hour training session to present the evidence of why a gendered lens is crucial for effective emergency management. The training addressed the increased prevalence and severity of violence against women in disasters and why communities excuse violence: ‘he was under such stress…he is such a hero…he was really pushed to the edge’. We discussed the return to hyper-traditional gender stereotypes to understand the ‘hero-myth’ that promotes unrealistic versions of masculinity and ‘male’ forms of heroism that means men are less likely to seek help. We also considered the perpetuation of outdated stereotypes of women being ‘weak’ and falling into nurturing roles who are rarely in decision-making positions.

It was the real-life stories from research into the Black Saturday fires in 20093,4 that were the most powerful:

One woman’s counsellor said, ‘You’re pretty well off. I know some couples that are so badly damaged there’s no hope for them, and their kids are damaged and everything’s a total mess. So you and James are comparatively easy. (Christina4)

The ‘comparatively easy’ situation was one where Christina’s partner choked her, only dropping her when she was gasping for breath, and breaking her kneecap on the tiled floor.

Another story was of a man, Rod, who opened up by saying:

Every man thinks there are expectations on men to stand up and be brave….instead, I think a lot of people were absolutely shit scared and didn't realise that that was a perfectly natural and normal feeling. I’m sure a lot of those who were, feel it was a weakness.

The training certainly got the team engaged and motivated. A few months after the training, the emergency team was put through its paces in an intensive simulation exercise to put theory into practice. They were confronted with a range of scenarios such as how to ensure the woman with the screaming baby stays safe as she discloses that she is scared of her husband ‘exploding’. Or having to call upon interpreters to understand the Punjabi woman with limited English or making sure rainbow badges are shown and there are specific services to ensure our LGBTQI+ community members feel welcome. The scenarios certainly tested our trainers’ acting skills as we played out roles representing tricky situations that can present at an evacuation centre. 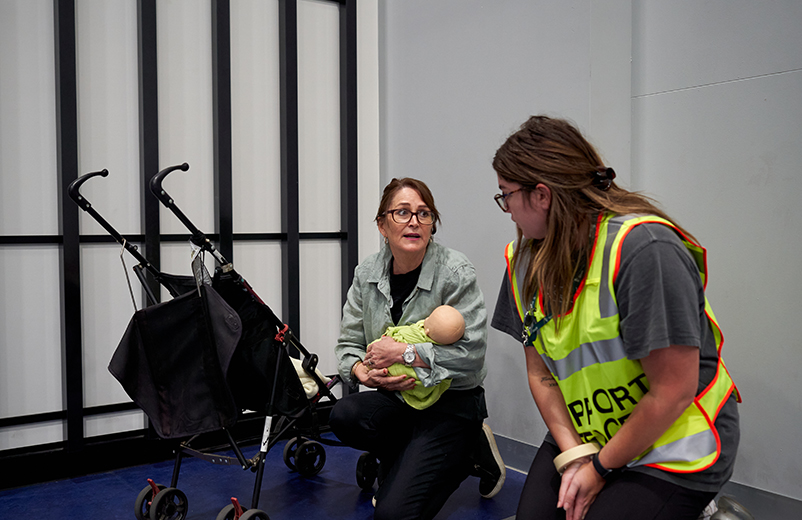 During the simulation, a first responder speaks to a woman who is disclosing family violence while at an evacuation centre.
Image: City of Casey An interpreter was organised to translate to a local Punjabi-speaking Sikh woman during the simulation.
Image: City of Casey

The Gender and Disaster Australia training included the development of action plans and the City of Casey team made changes into existing systems and processes. Among those actions was the application of a gender-impact assessment to its Emergency Management Handbook. The team also developed a new role specifically for emergency gender and inclusion that will be available to respond in the set-up of an evacuation centre. New partnerships were also identified that will include LGBTQI+ and family violence response organisations.

One of the unexpected outcomes was that the team has promoted the training and checklist with the Municipal Emergency Management Enhancement Group that includes local government emergency management staff from Melbourne’s South East Metropolitan area. As a result, they will be undertaking more training and incorporating gender into their induction programs. The emergencies team and trainers after an intense emergency simulation exercise at a local evacuation centre.
Image: City of Casey

Reflecting on the pilot, I am acutely aware of the potential barriers in the implementation of gender-transformative practice in real-life scenarios. Managing resistance in what is usually a male-dominated sector is likely to be a continual issue as we challenge gender stereotypes and traditional ways of working. Putting policy into practice is always more complex than it seems. However, with the development of a nationally available checklist accompanying the existing Gender and Emergency Management Guidelines, we have easily accessible resources to guide us. There really is no excuse anymore. If we want to abide by principles of ‘inclusion’, ‘do no harm’ and ‘leave no one behind’, then gender must be on the agenda across the emergency management sector.

For those who are still wondering what to label an inclusive toilet, the best practice at the moment is to have toilets for people with disabilities, ‘Male’, ‘Female’ and ‘All Genders’.

Taking action to accelerate progress towards gender equality in the fire and emergency sector - Madeleine Kelly It has long been recognised that the persistent low levels of gender diversity and inclusion within some AFAC member workforces requires action. The evidence is clear that increasing gender diversity improves individual, team and organisational performance.
Publication: