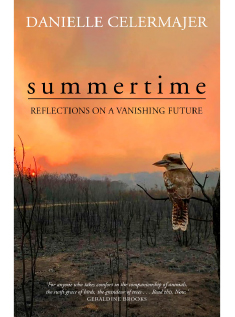 As unlikely as it may sound, the protagonists of this absorbing read are 2 pigs: one burnt to death in Australia’s summer bushfires of 2019–20, another alive and grieving. Their harrowing story provides a narrative arc to this book’s thoughtful exploration of the climate crisis that is upon us. By drawing on the multi-species entanglement of life on Earth, Danielle Celermajer dissects her own experiences of the bushfires with an emotional intelligence that is both compassionate and confronting.

The book follows the events as the bushfire-threat encroached and retreated repeatedly on the valley in New South Wales that Celermajer calls home. Each of the book’s 4 sections—titled before, during, after, world—tangle with the specificities of world-making and risk engagement, as well as the larger existential questions that either guide or mislead our moral judgements as individuals and as a society.

What Celermajer achieves in this book is monumental. She dares to stay with the trouble; to think through what others too easily relegate to the too-hard basket. She puts words to the unthinkable: that humans have altered Earth systems and the liveability of this planet to such an extent that we might be causing our own extinction. The book thereby speaks to a global audience despite its localised setting. Its felt and theoretical insights span diverse contexts—from everyday living and land stewardship to policy making and emergency management practices.

The book is eloquently stitched together to make the impossible visible. I would reread paragraphs just for their sheer elegance. Then I would reread them because they put words to a particular kind of torment. The crux of this torment concerns the ethical dilemma of knowing: ‘whether to know or shield oneself from knowing’ (p.81). This is a core focus of the book: how we approach death and unfolding catastrophe, and what this ‘knowing’ does to us.

I come to this book after 15 years as a social scientist researching how bushfires shape, change and destroy lives and livelihoods. The stories shared with me and the lessons learnt have left an indelible mark. They fuel a sense of dread from knowing what is to come with climate change, both in traditionally fire-prone regions like Australia and North America and in fire-known but less fire-prone regions like Europe where I now live.
Barely had I settled down here before catastrophic fires rage across mediterranean Europe in the summer of 2021. Scientific research predicts this will be the norm in many parts of Europe in the not too distant future. It will bring the same chronic flame and smoke conditions that plague Australia and North America with a regularity that dispels with established knowledge of fire regimes and fire behaviour. As Celermajer masterly narrates in Summertime, safety, stability and predictability are among the many casualties of our time, of the climate catastrophe. This knowing is both heartbreaking and an intellectual call to arms.

There is, at times, an uneasy tension between Celermajer’s felt entanglements with the more-than-human and her anthropomorphic descriptions of these multi-species dependencies. She readily admits to the confines of her own white, heteronormative, privileged culture that lacks a language to express ecological grief and the relational knowing of Indigenous peoples. However, the humility, depth and sense of responsibility with which she reflects on the meaning of value and the role humans play in the creation of conditions where fire begets fire is a masterly response to the call to arms.

There are ways of knowing and coping and then there is the barefaced knowing that this is just the beginning; that we must act in so many urgent ways to stop what increasingly feels like relentless triage of unchecked bushfires. In noticing the changing rhythms, Celermajer reminds us that the bushfires are more of a condition than an event. It is time to act sustainably and ethically while we still have options to do so.

Indigenous fire knowledge and land management practice - Victor Steffensen, Steve O'Malley A summary of sustainable ways of life and innovative approaches to climate change and catastrophic bushfire as presented at the Gender Justice conference in 2021.
Publication: