In 2018, Geoscience Australia updated and released the Probabilistic Tsunami Hazard Assessment (PTHA), which outlines the tsunami hazard for all of Australia and its offshore territories.

The 2018 update reflects improvements in science and technology and includes insights gained from tsunamis that have occurred since the last update a decade ago. The PTHA includes data for more than half a million earthquake-tsunami scenarios in Australia. It reflects advances in understanding of how frequently large earthquakes that can cause tsunamis occur and the uncertainties in these frequencies. Additionally, it has data for more locations around Australia. 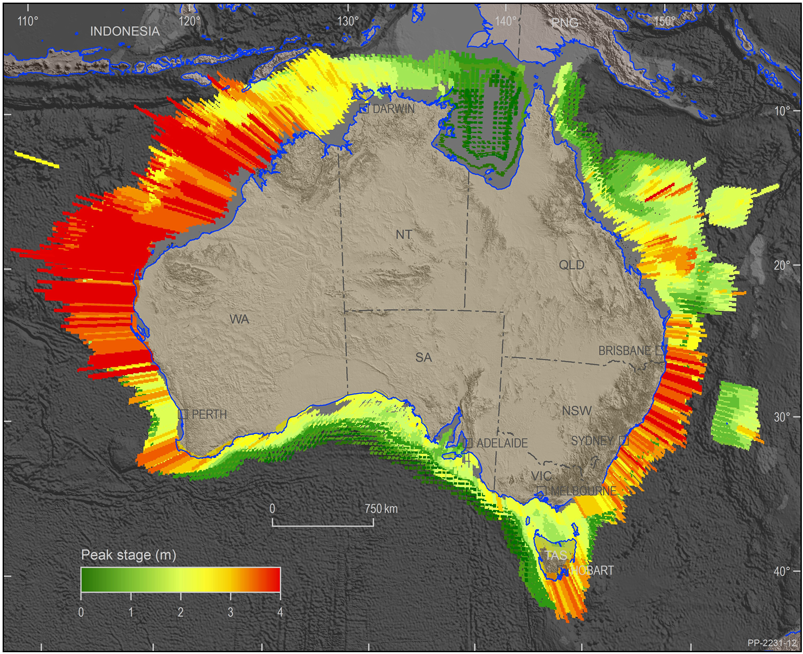 The new methodologies in the 2018 update have been tested using ten years of deep ocean tsunami observational data from the Pacific Ocean to confirm they give a realistic depiction of tsunami behaviour. This data allows users to more accurately estimate the predicted tsunami hazard for specific locations. It was not included in earlier updates, as most of the tsunamis in the test-set occurred after 2008.

Although most people do not think of Australia as being vulnerable to tsunamis, there have been more than 50 recorded incidents affecting the Australian coastline since European settlement. Most of these resulted in dangerous rips and currents rather than land inundation.

Tsunamis that affect the Australian coast are caused by subduction zone earthquakes in the Indian and Pacific oceans. Subduction zones are tectonic plate boundaries where two plates converge and one plate is thrust beneath the other.

In Australia, the northwest coast in Western Australia is more likely than the east or southwest coast to experience a tsunami due to its proximity to the Indonesia tectonic plate boundary, which has a long, seismically active fault line. An example of this is where the Geraldton marina in Western Australia received damage during the 2004 Indian Ocean tsunami, which occurred in Indonesia. Effects were also felt in the Oman port, near the Persian Gulf, which was over 6000 km from the earthquake epicentre.

Tsunami studies derived from the PTHA will inform evidence-based disaster management and evacuation plans as well as infrastructure planning and mitigation strategies.

Currently, the Joint Australian Tsunami Warning Centre operated by Geoscience Australia and the Bureau of Meteorology provides at least 90 minutes warning to the Australian public and emergency managers to take action.

The PTHA is the first step in gaining a better understanding of the tsunami hazard for specific locations around the Australian coastline and how emergency managers and infrastructure planners can reduce vulnerability to communities and the effects of tsunamis.

Thanks is extended to the International Research Institute of Disaster Science, Tohuku University for being host and to the Department of Foreign Affairs and Trade for supporting attendance.

Reflections from Sendai: lessons for Australia, Jane Sexton, Geoscience Australia Eight years has passed since the Great East Japan Earthquake occurred that devastated so much of Japan. In November, the occasion was marked by a United Nations International Strategy for Disaster Reduction meeting in Sendai.
Publication: