A groundswell of caring for country

In the aftermath of devastating bushfires, the Dixons Creek Primary School community took up the challenge to think of and create ways to build resilience to future events by using local and traditional knowledge of the land.

The local primary school is an important meeting place and community centre for the people of Dixons Creek in Victoria. The devastation of the Black Saturday fires in 2009 resonated throughout the school community, directly impacting on as many as half its families. The school was permeated with a tangible sense of fear and the knowledge of suffering in the community; a number of children lost their homes.

Seven years later, two community members travelled north to Cape York to attend the National Indigenous Fire Workshop. Working with Wurundjeri elders in Victoria had inspired them to learn more about Indigenous fire practices. Run annually, the workshops take practitioners on country1 with Indigenous elders to teach them skills in observing the land and to gain a greater appreciation for the ‘cultural responsibility of looking after country’.

The community members—parents of children at Dixons Creek Primary School—saw an opportunity to bring the school, the local Wurundjeri people and the local community together through learning about Indigenous fire practices. Dixons Creek became one of many communities embracing the ‘Return of the Firestick’,2 an organic movement to rediscover and share traditional knowledge of fire as a tool in the landscape.

Teaching those children will spread the message about what Indigenous burning is about. They will be the driving force in the future….to lead the groundswell of caring for our country in a traditional and culturally sensitive manner that is governed by the country not governed by people.
Uncle Dave Wandin, Wurundjeri Elder

The students were encouraged to experience the natural environment in a sensory way; noting what they could see and smell. They learnt the difference between the white smoke of gentle, cultural burning that supports regeneration and the black smoke of a hot, destructive bushfire.

Fire can help the country regenerate and get better again…[the fire in an Indigenous burn] trickles along the ground, without burning the trees. It just burns the leaves and then it gives regeneration to the grass.
Lily Ellis, Dixons Creek Primary School student 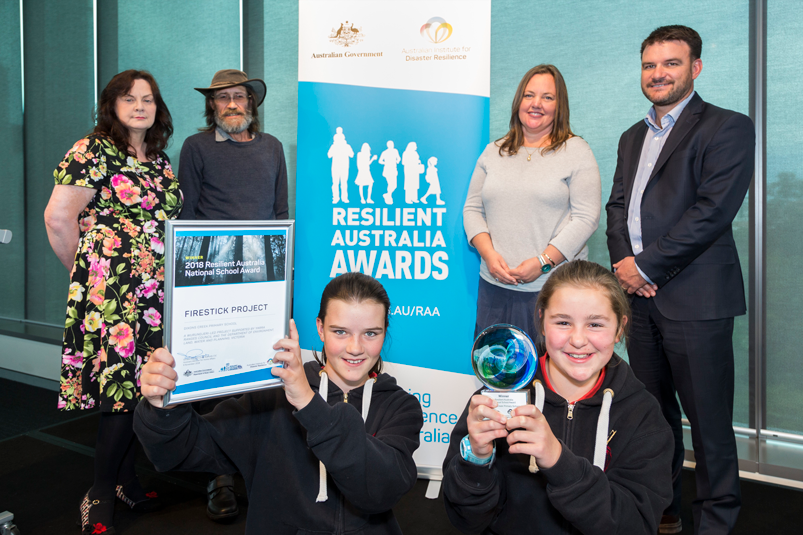 The project had a profound effect on the Dixons Creek community. Students expressed a sense of empowerment for themselves and the communities from increasing their understanding. ‘I used to be scared of fire,’ said student Shanice Banks. ‘It’s better now that I know what can happen.’ Student Lily Ellis reflected that fire was ‘now not as scary to people because they know it’s not going to hurt them if they burn the bush before.’

As well as alleviating fear, the project motivated behavioural change in families. As students shared their learnings at home, several parents began to apply the principles of Indigenous burning to the management of their own properties.

What we have been trying to do with this project is reeducate the community through the students. Fire can be healthy for our environment. As a community, we can face future fires…it gives us all hope.
Kylie Schabel, Teacher, Dixons Creek Primary School

Beyond families, Yarra Ranges Council saw the project’s value. The Council’s Jennie Schoof worked with the school to develop a book depicting the learning journey and featuring the words and drawings of students titled, ‘Shhhhh the Parent Trees are talking’. At a state level, the project was supported by the Victorian Government Department of Environment, Land, Water and Planning.

The message is spreading further, with student presentations to visiting politicians, at a reconciliation event in nearby Healesville and for the Victorian Disaster Resilient Australia-New Zealand School Education Network in Melbourne. Further afield, the Firestick project was presented to the Coastal Ambassadors program at Phillip Island.

I am hopeful that other communities can learn from our experience, that fire and our environment can be managed. Rather than being helpless, each community can make plans for their future. The Indigenous people have a great deal of knowledge about the land we live on…their knowledge should not be dismissed.
Kylie Schabell