Firebombing at night – why not!

AJEM 33:2 – April 2018
AJEM April 2018 Foreword 2017 Lessons Management Workshop Case studies point to research use Learning for the future: the emotional cycle of bushfire Volunteers: the ageing and the millennials Connecting communities through volunteering: lessons learnt at NSW SES Firebombing at night – why not! A vital layer of safety for Australia’s airports Case study: urban aircraft deployment in Victoria Case study: lessons management capability in emergency management and beyond Case study: the preparedness puzzle Case study: the Victorian Emergency Management Community Resilience Index We learn as one: Victoria’s journey to collaborative lessons management Book review: Aitape Story: the Great New Guinea Tsunami of 1998 How emergency services organisations can – and do – utilise research Can major post-event inquiries and reviews contribute to lessons management? Updating the costs of disasters in Australia The Total Flood Warning System: what have we learnt since 1990 and where are the gaps nderstanding the role gender plays in survivor responses to natural disaster: evaluating the Lessons in Disaster Program Animal emergency management in South Australia: a case study of the Sampson Flat bushfire Community empowerment and trust: social media use during the Hazelwood mine fire EM Online: The Australian Emergency Management Library

Dropping fire suppressant and retardant from aircraft provides great support to firefighters on the ground at bushfires—during daylight. So why isn’t standard practice to continue firebombing operations into the night?

Fighting bushfires at night takes advantage of cooler conditions, higher humidity and more moderate fire behaviour. Importantly, controlling a fire overnight may be critical in preventing a major flare-up the following day. So why not?

The good news is …. it does currently happen in some parts of the world and Australian agencies are currently working hard to test and introduce a limited night firebombing capability. The main issue is that firebombing is an inherently visual operation. Pilots need to clearly see and avoid terrain, obstructions, smoke and cloud and they need to eyeball their targets. For some decades, helicopters and fixed-wing aircraft have routinely operated using Night Vision Imaging  Systems  (NVIS) such as Night Vision Goggles (NVG) to intensify available light at night time to allow safe visual flight. NVIS have their limitations, such as lack of depth perception and a narrow field of view, however, the technology has improved steadily and it is now viable to undertake night firebombing in Australia, at least under some conditions. NVIS are already widely used in Australia in police and air ambulance work, and increasingly in bushfire support for activities that occur at greater heights aboveground than firebombing, such as gathering intelligence and dropping incendiaries. The National Aerial Firefighting Centre has a number of NVIS-equipped helicopters and fire agencies across the country are routinely using NVIS helicopters for bushfire support. A small number of fire and rescue agencies in north America have had NVIS firebombing programs for some time. Overall, this body of experience provides valuable insight for developing a safe and effective night firebombing capability in Australia

There are risks. Firebombing is conducted close to the ground. At night, the chances of flying into low visibility and colliding with obstructions like power lines and trees are increased. Hovering a helicopter (to land or to hover- fill) requires clear visual references that may be obscured more easily at night. Options to deal with aircraft emergencies become more limited. The NVIS systems may be affected by excess light generated by the fire. These risks need to be carefully managed and controlled. There are also significant regulatory considerations. Australian civil aviation legislation is quite progressive   in allowing civilian NVIS operations with helicopters but, understandably, high standards are required and there are plenty of hoops to jump through.

Cost is another factor. We would expect that operational and regulatory constraints on night firebombing will affect productivity and that in many circumstances firebombing at night will be more costly than during  the day. This will have to be balanced against the likely benefits.

So what’s the best way to introduce a night firebombing capability in Australia? Step by step, in a  very  careful and controlled way! A number of states have been developing plans for staged implementation and at the time of writing, proposals were well advanced for a trial in Victoria during the latter part of the 2017-2018 bushfire season. This trial aims to evaluate the effectiveness of night aerial firefighting and to understand the constraints and limitations from a fire agency perspective; as well as providing aircraft operators and the Civil Aviation Safety Authority with valuable insight into managing the flying side of things.

On the horizon there are plenty of developments that will help make night firebombing in Australia a reality for both helicopters and fixed-wing aircraft. NVG technology continues to improve rapidly. Flight control systems that assist the pilot at critical phases of flight, such   as hovering, are becoming common. Synthetic vision systems offer huge possibilities. These use a variety of sensors to re-create the outside world on a screen or heads-up display in the aircraft and are already in routine use by organisations such as the Royal Flying Doctor Service. Of course there is always the possibility that remotely piloted aircraft will play a role in delivering retardants and suppressant to fires in the future, including at night.

There’s no doubt that even a limited capability for aerial firefighting at night will be another valuable tool to support firefighters and protect communities. It’s on the way. 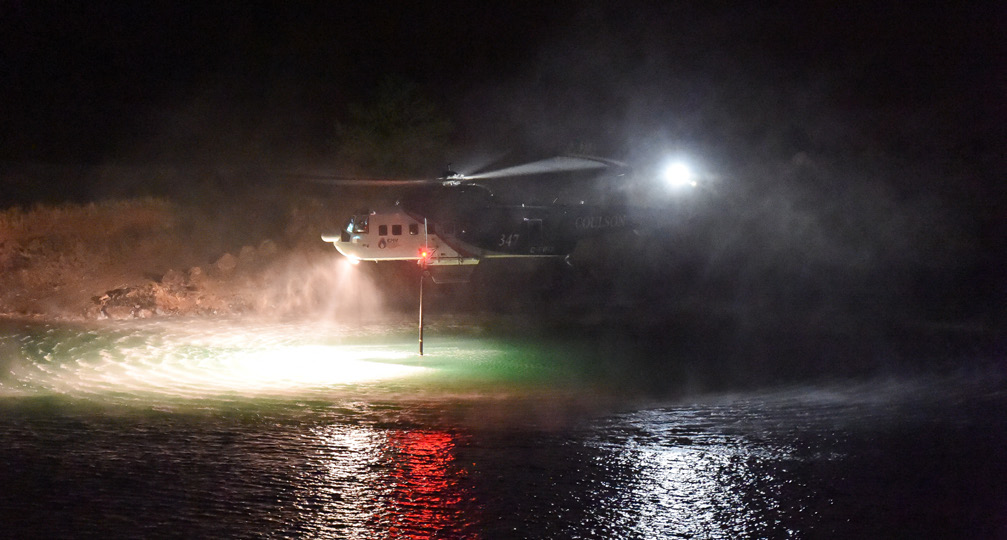