AJEM 33:2 – April 2018
AJEM April 2018 Foreword 2017 Lessons Management Workshop Case studies point to research use Learning for the future: the emotional cycle of bushfire Volunteers: the ageing and the millennials Connecting communities through volunteering: lessons learnt at NSW SES Firebombing at night – why not! A vital layer of safety for Australia’s airports Case study: urban aircraft deployment in Victoria Case study: lessons management capability in emergency management and beyond Case study: the preparedness puzzle Case study: the Victorian Emergency Management Community Resilience Index We learn as one: Victoria’s journey to collaborative lessons management Book review: Aitape Story: the Great New Guinea Tsunami of 1998 How emergency services organisations can – and do – utilise research Can major post-event inquiries and reviews contribute to lessons management? Updating the costs of disasters in Australia The Total Flood Warning System: what have we learnt since 1990 and where are the gaps nderstanding the role gender plays in survivor responses to natural disaster: evaluating the Lessons in Disaster Program Animal emergency management in South Australia: a case study of the Sampson Flat bushfire Community empowerment and trust: social media use during the Hazelwood mine fire EM Online: The Australian Emergency Management Library

How many of us can recall the details of the  tsunami  disaster in the Aitape District, suffered in 1998 by our closest neighbour, Papua New Guinea? Halstead Press in Sydney has provided a valuable service by publishing a well-designed book on the disaster.

Aitape Story concentrates on the remarkable relief and recovery efforts that involved a great range of emergency, medical, media and disaster-management agencies, both Papua New Guinean and international, both government and non-government organisations. These response groups included the Australian Government through its aid program, the Australian Defence Force (ADF) and other organisations such as the Monash Orthopaedic Surgical Team, Melbourne. 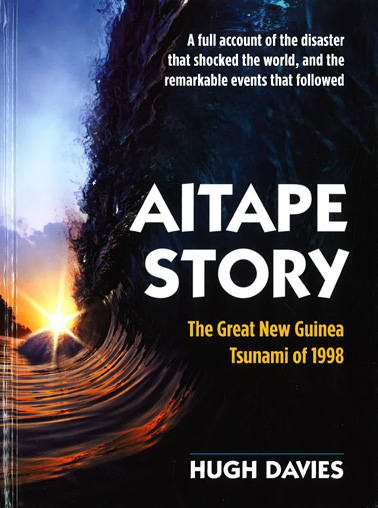 The Aitape tsunami struck the north coast of New  Guinea island in West Sepik Province a few minutes after dusk on Friday 17 July 1998, and shortly after a series of earthquakes and aftershocks occured below the seafloor only a few kilometres offshore. The tsunami hit most severely along a 45 km-long stretch of coast, and particularly along a quite localised, central, 14 km-long sector bordering Sissano Lagoon. Villagers living in front of the lagoon-many isolated on sand spits at the ocean’s edge were swept into the lagoon by a 10-15 metre-high tsunami wave. The exact total of deaths is unknown but likely was more than 1600. Injuries caused by people being tumbled helplessly and violently in the destructive wave that was laden with debris (mainly logs and sand) were extreme. The still-living villagers, and those who were still dying, spent a horrific night abandoned, traumatised and trying to cope as best they could.

The author of Aitape Story is Professor Hugh Davies, an Australian and a long-time resident of Port Moresby. Davies has developed over his geoscientific career a strong commitment to the study of geological hazards and to related disaster-management issues, including geologically at-risk communities. This compassionate commitment to the people of Papua New Guinea emerges clearly from the pages of his engaging and definitive account. It is the kind of book that could readily  be overdramatised, but Davies’s style is objective, clinical, calm and respectful.

Books have been published before on geological disasters, but I don’t know of any that have ‘drilled down’ so deeply to portray so effectively the personal stories of survivors, volunteers, church people, missionaries, trauma counsellors and the medics who worked heroically in hospitals in nearby Wewak and Aitape and  at Vanimo Hospital where an ADF field hospital was established. Local volunteer rescuers were especially effective in the first days after the tsunami struck.

Davies was involved in smoothing the way for international tsunami scientists visiting the disaster area in late July and August 1998 in order to assess the cause and impact of the Aitape tsunami. These International Tsunami Survey Teams (ITST) and other inquisitive scientists brought in seismographs as well as marine geophysical equipment including a remotely operated submersible. One scientific hypothesis was that the 1998 tsunami had been caused by a  nearby submarine landslide triggered by one of the precursory, local earthquakes, rather than by one of the earthquakes themselves. Such a young landslide could not be identified unequivocally. The ITST scientists, to their credit, returned to the Aitape area in September 1999. They presented their results at well-attended community gatherings and later at a special conference that was held in Madang, which was attended by a wide range of participants, including Aitape villagers and survivors.

Davies finishes with these words:

… ultimately the onus to recover was on the individuals, each of whom had suffered some degree of loss, who pulled their families together, rebuilt their houses, carved new canoes, planted new gardens and made the villages. I admired them greatly. It was a privilege to be there and see it happen."

How emergency services organisations can – and do – utilise research – Dr Christine Owen, University of Tasmania In emergency management organisations, the drive to use research to inform practice has been growing for some time. This paper discusses findings from a survey used to investigate perceived effectiveness of a number of important processes in research utilisation. In 2016, a survey was completed by 266 respondents in 29 fire and emergency services agencies. Questions sought answers on perceived effectiveness in disseminating research within agencies, assessing and evaluating the impacts on agency practice of the research, implementing agency changes that may be needed, monitoring processes to track changes and communicate outcomes of changes made as a result of research. The study found that there were differences in levels of perceived effectiveness between those in senior management and front-line service positions. The differences suggest that front-line services personnel have lower levels of perceived effectiveness in how research is disseminated. The study also found agencies had different approaches to keep up-to-date with research advances. An examination of the activities identified four developmental levels of research utilisation maturity. The findings suggest more work is needed to better understand the enablers and constraints to utilising research to support development of evidence-informed practice.
Publication: