The unequal burden of disasters in Australia

Bushfire and Natural Hazards CRC research has shown that the true costs of disasters are typically greater than what the direct damage estimates suggest.

For example, according to Deloitte Access Economics (2016), the direct total (tangible and intangible) damages of the 2009 Black Saturday bushfires were $7 billion. However, we found that, following the Black Saturday bushfires, agricultural employees who lived in the fire-ravaged areas lost an average of $8,000 in annual income for the next two years. Employees in the accommodation and food services industries lost an average of $5,000.

This research also found that the burden of lost income as a result of the disasters is not borne equally. That is, the income gap routinely increased after disasters. For example, following the 2010-11 Queensland floods, which were reported to have costed $14.1 billion in direct damages, the difference between those on low and middle incomes in the Brisbane River catchment area increased by about $7,000 a year.

Low-income earners, small-business owners and part-time workers are more likely to lose income following a disaster. Middle and high-income earners, full-time workers and owners of larger businesses are far less likely to lose income; indeed, they might even earn more. This means that disasters resulting from natural hazards can cause the income divide to become larger.

Further, certain demographic groups exhibited lower economic resilience in returning to their pre-disaster income levels in the aftermath of disasters. Following the Black Saturday bushfires, low-income individuals and the female workforce experienced lower income levels that persisted until 2016, seven years after the fires. This contrasts with high-income earners, who despite having lost income in the short term, were able to bounce back to their original income trajectory by 2016. This suggests that the income divide persisted in the medium term.

We used the Australian Bureau of Statistics’ individual-level, de-identified, longitudinal census data sets1 from 2006, 2011 and 2016 in a difference-in-differences modelling, where we compared the incomes of people living in disaster-hit areas with those in comparable areas not affected by disasters.

We examined the following disasters caused by natural hazards:

While there were research limitations related to observing individuals every five years, the anonymised census dataset comprises a five per cent representative sample of the Australian population, providing a significant amount of observations that enable a granular analysis. Also, findings that were common and robust across the different disasters provided additional confidence in the results.

Across most of the disaster types, scales and areas, those most likely to lose income following disasters were employed in agriculture, and accommodation and food services (covering the tourism industry). This effect was almost uniform across all case studies, except for the Toodyay bushfire.

In addition, being employed in disaster-sensitive sectors meant that there were flow-on effects onto certain demographic groups who had a high employment concentration in those sectors. These groups included, low-income earners, small-business owners, part-time workers and sometimes the female workforce.

Post-disaster income losses do not affect full-time workers or higher-income earners nearly as much as others in the affected communities.

Unlike the groups of people who lose, gains are not uniform. It varies by disaster. For example, after the Black Saturday bushfires, those employed in Victoria’s public and administrative services benefited most, with their income increasing.

After the 2010–11 Queensland floods, incomes were higher for health and retail employees in the Brisbane River catchment area. Low-income earners lost an average of $3,100 in the year following the floods. Middle and high-income earners earned a higher income of an average of $3,770 and $3,380, respectively, for the same time period.

Our analysis suggests that the way in which relief and recovery funding is invested may inadvertently contribute to widening the income gap, or at least does not fully prevent the increased divide.

In the six months following the Queensland floods, for example, just 10 per cent of the recovery spending went to income and wage assistance. At least 80 per cent went to businesses (Chamber of Commerce and Industry Queensland 2011). 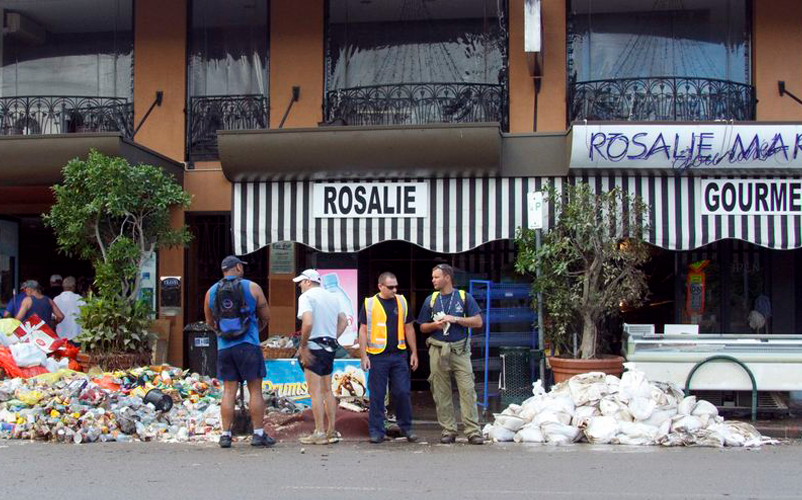 Local businesses assessing the impacts of the Brisbane floods in 2010–11 on their stock.
Image: Angus Veitch (CC BY-NC 2.0)

Overall, there is room to rethink how we might build a more sustainable model for disaster recovery.

It’s important to assist businesses because they are arteries of the economy. But four possible improvements to the current recovery funding model could help minimise the widening of the income gap.

First, assistance programs should make it a priority to balance the imperative of short-term aid with the importance of not making inequality worse in the longer term.

Second, funding arrangements need to account for the characteristics of different disasters, and the different patterns of social effects. Not all disasters are the same, but the current funding model tends to treat them as if they are.

Third, programs should account for the greater vulnerability of households that depend on part-time, casual work and other forms of insecure work.

Fourth, programs should acknowledge the susceptibility of different employment sectors. While the Natural Disaster Relief and Recovery Arrangements scheme provides some benefits to the farming sector, other sectors, such as accommodation and food services, can also be hit hard.

Income matters. It shapes all household decisions. With more frequent and extreme weather events predicted, disasters present an increasing threat to social equality and all the benefits that flow from that. It is crucial to ensure relief and recovery efforts do not inadvertently contribute to widening the gap.

Deloitte Access Economics 2016, The economic cost of the social impact of natural disasters.

Chamber of Commerce and Industry Queensland 2011, Six Months on from Queensland’s Natural Disasters A Report to the Queensland Government.

Facing fire with foresight: the Community Based Bushfire Management project in East Gippsland, Fiona Macken, Safer Together, Victoria Reducing risk using community-based and place-based approaches addresses problems that are specific to a location or a community.
Publication: