The fires scars of 2019–20 are etched into the collective memory and landscape of Australia. Never had we burned so ferociously, mobilised the scale of firefighting resources and attracted the relentless glare of the national and international media. Images of the Erickson Air-Crane and large air tankers dropping their crimson payloads from the heavens loomed large.

Our leaders were asked uncomfortable question about climate change and our preparedness for this foreseeable emergency.1,2 The National Aerial Firefighting Centre (NAFC) received a funding injection.3 Devastated communities wanted answers.4 In the ashes of the Black Summer, the Royal Commission into National Natural Disaster Arrangments arose to examine critical issues, in large-scale emergencies.5

It is against this backdrop of heightened agency, community and political interest, that the COVID-19 pandemic has emerged, to complicate planning and operations for 2020–21.

NAFC General Manager, Richard Alder, said, ‘If we have collectively learnt nothing else from the 2019–20 bushfire season, it is that we need to plan for the worst!’ The role of NAFC

NAFC facilitates the coordination and procurement of firefighting aircraft on behalf of the states and territories. NAFC plays a crucial role in facilitating the sharing of aerial resources between Australian agencies and in the development of national protocols and systems for aerial firefighting. For the 2020–21 season, NAFC continues to consult with the aircraft operators, alongside jurisdictional, federal and aviation authorities, to facilitate COVID-19 safe planning and operations.

The demand for aerial firefighting resources

NAFC and state and territory agencies are planning for the possibility that COVID-19 considerations may place extra demands on aerial firefighting assets for the 2020–21 season. A heightened emphasis on rapid initial aerial attack may assist in reducing reliance on ground crews and minimise the time in COVID-19 exposure environment. It also factors in the potential difficulties for deploying ground crews generally and possible constraints on accessing surge capacity from other jurisdictions, due to cross-border travel restrictions.

Effectiveness and responsiveness of aerial assets

The effectiveness and responsiveness of aerial assets in the COVID-19 environment may be limited to some degree. They may be less mobile as risk-mitigation plans may require return-to-home-base to reload and refuel, and maintenance crews may be operating under COVID-19 constraints. There could be interruptions to ground support, such as retardant loading and refuelling. Access to surge capacity through 'call-when-needed' aircraft may reduce and access to additional large air tanker resources at short notice would be unlikely. 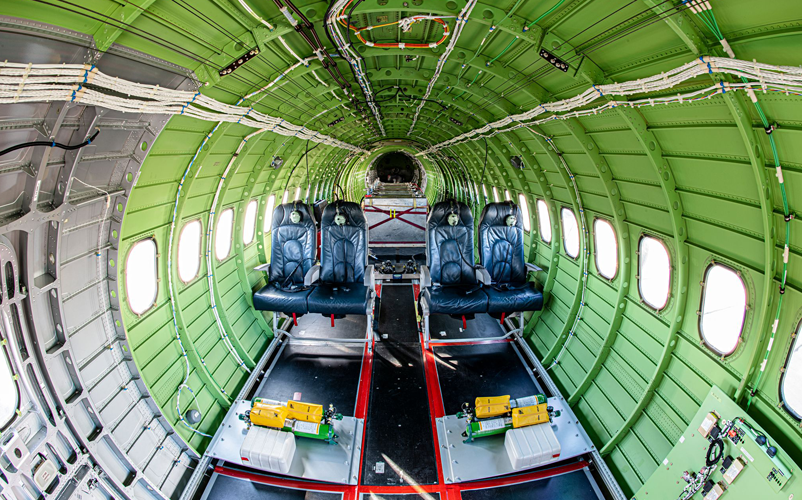 Inside the Q400MR a firefighting aircraft that can carry 10,000 litres of water or retardant. Image: Conair

A small portion of the national fleet is sourced from the northern hemisphere requiring movement across national and jurisdictional borders. To maximise the safety of operating in the COVID-19 environment, NAFC is consulting with contracted suppliers, and federal, jurisdictional and aviation authorities. NAFC and state and territory agencies have identified key areas of risks to manage that include:

Risks are currently being addressed through stakeholder collaboration and cooperation. Parties will have plans for aviation operations under COVID-19 restrictions during the 2020–21 severe weather season.

Detailed planning was undertaken to enable the mobilisation to Queensland of the Bombardier Q400 water-bombing aircraft. The arrival of the Canadian aircraft into Australia had its challenges, due to COVID-19 travel and quarantine restrictions. The Australian operator of the plane, Victorian-based Field Air, worked with its Canadian partner and Australian and International government agencies to ensure its timely arrival.

The flight path included a stopover in the Solomon Islands on 23 August. The Solomon Islands Government supported a request from the Australian Government to enable the aircraft to refuel and the two Canadian pilots to rest overnight, under tightly managed infection control protocols. The Q400 arrived into Brisbane for customs clearance on 24 August and flew to Bundaberg on the same day.

The crew was tested for COVID-19 on arrival in Brisbane and returned a negative result on 26 August. They operated in an isolation bubble for 14 days and were only permitted to move under Queensland Fire and Emergency Services (QFES) escort between their accommodation, the airbase and the aircraft.

At the Bundaberg airport, the crew could undertake routine maintenance and servicing of the Q400. They used a side entry to the airport, did not enter or transit through the terminal, and their office space was away from other airport staff. The crew used face masks and maintained social distancing when interacting with QFES officers.

As the Q400 water-bombing aircraft is a large air tanker6, it operates in the field with a smaller TC690 supervision plane and the pilot from Victoria was granted access to Queensland under essential worker provisions. The TC690 arrived in Bundaberg on 27 August and the pilot was quarantined and tested for COVID-19. The pilot was released after receiving a negative result on 29 August and cleared to commence duties.

The Q400 crew were required to socially isolate before commencing service on 1 September but remained in their isolation bubble for the full 14 days until 7 September. They were subject to the same social and work COVID-19 safe requirements as all Queenslanders. Extensive use was made of aerial firefighting resources during the 2019–20 bushfire season. Image: Wayne Rigg

The journey of the Q400 from Canada to Australia required the cooperation of different authorities not usually involved in processing arriving international firefighting aircraft. Collaboration between the Solomon Islands Government, Emergency Management Australia, the Department of Foreign Affairs and Trade, QFES and Queensland Health was a critical success factor in delivering the Q400 to Queensland in a COVID-19-safe operation.

In this climate of heightened interest in aerial firefighting, the COVID-19 pandemic has emerged to complicate planning and operations for 2020–21. NAFC has consulted widely and has predicted increased demand for aerial assets, identified risks requiring mitigation and areas of increased operational challenges. NAFC and states and territory agencies are actively working with contracted suppliers, and federal, jurisdictional and aviation authorities to play their part in supporting a COVID-19 safe 2020–21 bushfire season.

3 NAFC received an $11 million funding boost in January 2020 from the Australian Government.