The Wellington region in Aotearoa New Zealand experiences regular earthquakes and is vulnerable to potentially lengthy outages of wastewater and road networks. Recognising this, a collaborative project was conducted between scientists and Wellington’s water network management company, emergency management body and regional public health authority to create a coherent emergency sanitation plan for a major wastewater system failure. This work built on a foundation of research and a pilot study previously carried out in the region on emergency sanitation. Workshops with project participants created a plan to provide communities and responders with clearly defined roles and responsibilities. The result is a plan that acknowledges constraints of provision but enables stakeholders and communities to take preparatory steps for, and respond to, sanitation outage events. The plan includes an important infographic about emergency sanitation options as well as what utility and healthcare organisations will do in the event of the plan’s activation.

The Wellington region in New Zealand is crossed by many active faults, making it highly vulnerable to earthquakes (Wellington Region Emergency Management Office 2019). In the case of a rupture of the Wellington Fault, there would be considerable damage to the wastewater system in the region. Outages to the wastewater collection system could last 3 months and may exceed 2 years (Wellington Lifelines Group 2019) in the Wellington metropolitan area. This would cover the cities of Porirua, Upper Hutt, Lower Hutt and Wellington (see Figure 1), which, in 2022, have a combined population of approximately 440,000. 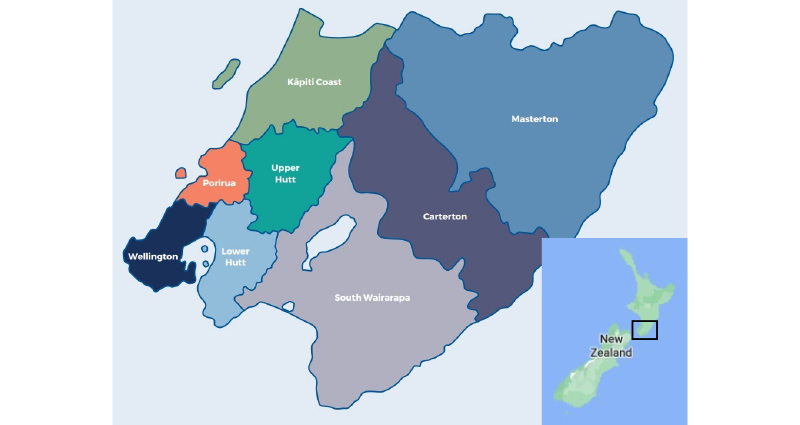 The Wellington region has a variety of topographies including flat valley floors and hilly suburbs. The steeper topography, in close proximity to some major transport routes, means that road access around the region could be affected for days to months (Wellington Lifelines Group 2019). This would reduce the ability of emergency services organisations to respond to the earthquake and would also disrupt services such as refuse collection. While the valley floors are largely away from steeper ground that is exposed to landslides, they are highly vulnerable to liquefaction (Dellow, Perrin & Ries 2018). These factors influence the alternatives for emergency toilets as well as the ability to create a system in which waste (such as from chemical toilets and portable toilets) is collected from dwellings.

The region is host to a variety of living arrangements from timber-framed, stand-alone houses on private land, to multi-storey apartment blocks, particularly in central Wellington City. Further, as for any population, there is a range of ages, capabilities, capacities and ethnicities in the community. This results in differing abilities to cope with and respond to an emergency event, including approaches to sanitation. It also affects people’s access to resources, both prior to and during, an emergency event.

Local councils of the region carry out the local government functions for the cities. Council-controlled organisations include Wellington Water (for the operation and maintenance of the water, wastewater and stormwater networks for council areas) and the Wellington Region Emergency Management Office (WREMO), which coordinates the Civil Defence and Emergency Management (CDEM) services on behalf of the 9 councils in the region. The councils are responsible for waste management in their areas, although solid waste operations are largely carried out by contractors. Regional Public Health is the public health unit for the greater Wellington region. The work of Regional Public Health includes public health information, working with CDEM and investigating disease outbreaks. Massey University has a campus in Wellington City with staff and students who study post-earthquake environmental health challenges and solutions.

Recognising the potential for lengthy outages of wastewater and following experiences in the 2011 Christchurch earthquake response, Massey University and WREMO collaborated on a pilot of a ‘composting toilet’ to capture excreta. This approach uses the concept of separating the urine and faeces at the source using 2 buckets (now referred to as the ‘two-bucket’ system). This approach means that odours are minimised from the waste, the faeces decompose relatively quickly and the bacterial count drops rapidly within 2 months (Brenin et al. 2021a).

Massey University led a collaboration with Wellington Water, Regional Public Health, WREMO and the councils to understand the process of capture, containment, emptying and transport, treatment and disposal or re-use of excreta, if using the two-bucket system. This led to the councils, WREMO, Wellington Water and Regional Public Health to conduct a project including a wider range of stakeholders to plan for emergency sanitation. Stakeholders were from the local Māori iwi (tribe) (Ngāti Toa) and managers and contractors of solid waste.

Goal of the plan and levels of service

The councils, Wellington Water and WREMO created a high-level goal and target levels of service for an emergency sanitation response:

The target levels of service were created to support the outcomes of the plan and to highlight that emergency solutions are not solely for a single organisation to perform. Members of the community will need to be self-sufficient for the first 7 days following an event and adapt their sanitation practices in the weeks and months following until wastewater networks are repaired.

Three workshops were conducted for this project. Details of the first workshop held in November 2019 are outlined by Breninand colleagues (2021b) and covered understanding the process of production, capture, collection and transport, treatment or disposal or re-use of wee and poo using a sanitation chain framework (Wirmer 2014). Figure 2 illustrates the sanitation chain. At this workshop there was also discussion about appropriate terminology and an agreement to avoid euphemisms in public messaging (and for the project). For this project, we decided to use the terms ‘wee’ and ‘poo’. The second workshop was in December 2020 and options for emergency sanitation were examined. At this workshop, the options identified at the first workshop were prioritised and a matrix was created (see Table 1). This matrix established the preferred emergency sanitation options that were taken forward and, importantly, excluded some options from further consideration. For example, chemical toilets and community portable toilets were excluded due to the difficulty of collecting and treating the waste after a major earthquake. The elements of the matrix, and each option overall, were graded:

The third workshop was held in April 2021 and identified the emergency sanitation options that would be taken forward for public information. Early drafts of this information were discussed and the final version became the ‘Don’t Flush’ infographic (Figure 3). The workshop focused on 2 objectives:

This workshop highlighted the need to consider these aspects and the actions to be taken forward in following work. Māori representatives guided the cultural aspects of the plan.

The workshop also highlighted that some people would likely be unable to use a two-bucket solution (e.g. people with weight or mobility issues). Input from disability sector representatives was that people with limited mobility would need to use their regular toilet facilities that include handrails. Their preferred option would be to use a conventional pedestal toilet, placing a bag within the toilet bowl along with drying material such as sawdust or the super-absorbent material used in nappies. This option would be discouraged for the general population because of anticipated difficulties with sourcing of the bags and drying material, disposal of the resulting waste and potential for spillage and mess. The third workshop identified that further public information and education must include:

This work will be led by WREMO and will provide reasons why some options were not taken to help address expectations by members of the public that portable toilets and chemical toilets (as provided in Christchurch following the 2011 earthquake) will be provided in Wellington.

Procurement and marketing - a public-private partnership

In 2012, WREMO established a public-private partnership to enable people to purchase 200-litre emergency water tanks at an affordable price for $100 (a saving of $165). This has generated sales of more than 24,000 water tanks so far (2021) and resulted in nearly 5 million litres of water stored at homes around the region at minimal cost to the ratepayer or taxpayer.

WREMO and Wellington Water worked on a similar approach to improve people’s capacity to manage sanitation after an earthquake by promoting the two-bucket approach for toilets. With administrative support from the Greater Wellington Regional Council, a supplier of a two-bucket kit will be supplied as a package comprising a pair of 20-litre buckets with lids, a small seat and ‘starter’ items including 2 toilet rolls and disinfectant wipes. WREMO will make this the focus of an annual campaign from 2023 to help people understand how to manage waste through a range of options from digging a long-drop toilet, to using 2 buckets to modifying their toilet if they have physical challenges.

Effective stakeholder engagement was integral to the creating of an emergency sanitation plan for the Wellington region. This engagement will have to continue to progress the public information and education work and to ensure that all parties are prepared to respond in the event of a major failure in the region’s water and sanitation systems.

The Wellington region prepares for a major earthquake on the Wellington Fault because of the high-risk of prolonged damage to the region’s wastewater collection system. Target levels of service show that households will need to manage their own toilet waste on-site for at least a week. Beyond that time, viable emergency sanitation solutions have been developed that would be viable for households, giving special consideration to people within communities with extra physical or cultural needs. The emergency sanitation plan allows for physical features of the region (ground conditions, topography, likely availability [or not] of roads following a major earthquake) and cultural and social aspects (living arrangements such as house-dwellers and apartment dwellers) and the needs of those who may not be able use long-drop toilets or the 2-bucket kits.

The emergency sanitation solutions allow end-users to choose their preferred option, allowing for a range of behaviours, cultures and capacities. This work gives confidence that the options explored were appropriate and achievable for end-users and that a sound process was taken to consider the capture, containment and disposal options for waste.

This progress has identified sanitation options during an emergency for the Wellington region. The next steps will involve informing the region’s communities about their options and making 2-bucket kits easily available through a public-private partnership.

The authors acknowledge QuakeCoRE for their funding for the 2-buckets research and appreciate the contribution from the participants in the workshops and throughout the project process.

Wirmer BR 2014, A functional approach to guide sustainable innovations in the sanitation chain. (Master of Science in Innovation Sciences), Eindhoven University of Technology. At: https://pure.tue.nl/ws/portalfiles/portal/46969277/778536-1.pdf.

The authors work in 6 organisations in the Wellington region, New Zealand. All have had input to the emergency sanitation plan for the region. They come from the water, health, academic and emergency management sectors.

Community bushfire safety awareness: a community-led initiative progress report Over the last 30 years, approaches to community-based disaster risk management (CBDRM) in Australia have moved from the margins towards the mainstream of policy and practice. This paper describes a locally led initiative in an outer-eastern Melbourne community that is helping residents recognise their bushfire risks and how to take action to mitigate them.
Publication: