Examination of the levels of Indigenous employment in southern Australia reveals that most agencies do not adequately record the proportion of staff who are Indigenous. Recent initiatives to improve Indigenous staffing levels need to provide consistent and detailed data on employment.

A changing part of employer practices have been the creation of various reconciliation and inclusion plans designed and implemented in some jurisdictions (e.g. Department of Environment, Land, Water and Planning 20152, Office of Environment and Heritage 20183). These plans often include quota targets to employ a certain number of Indigenous peoples. However, these plans do not typically have similar targets for providing training to Indigenous communities, contracting services through Indigenous companies nor other relevant quantifiable forms of engagement and partnership.

The issue of diversity within the sector, as reflected in the employment data, leads us to ask: Are current levels of Indigenous employment broadly representative of the proportion of Indigenous residents in each state or territory? To examine this, a survey of the employment of Indigenous peoples in the sector over a five-financial-year period was undertaken.4 While there are clear limitations in this research, it is hoped the findings will:

In Australia, there are many agencies that have some level of responsibility in relation to natural hazards management. This study focused on agencies that have primary roles in the management of fires and floods. A search was undertaken of publicly available documents where employment statistics are commonly reported (i.e. annual reports). In instances where this data or documents were unavailable, agencies were contacted to source the data from their human resources divisions. Table 1 provides the resulting dataset, which is patchy and has some important interpretive limitations.

Some agencies included in this study do not (currently) collect information on whether their employees identify as Indigenous or not. Some agencies have only begun to collect this information in the past two to three years.

The absolute number of Indigenous people within any particular agency is not known because the data were only collected for people who voluntarily offered this information.

It is not known what proportion of the Indigenous people employed by these agencies work in areas related to their language group (e.g. Bundjalung), nation (e.g. Kulin) or cultural region of origin (e.g. Murri).

It is not known whether the Indigenous people employed within these agencies have responsibilities related directly to the management of bushfires, floods or other natural hazards. Several of the agencies are very large and have wide-ranging responsibilities in environmental management.

The focus on employment data means the survey does not provide information about Indigenous individuals who volunteer within natural hazards management agencies (e.g. Country Fire Authority 20145).

The aspiration of presenting and analysing this data here is that, even given the study’s limitations, it will form an important reference for more inquiry. The dataset provides a basis for preliminary findings regarding the distribution of Indigenous peoples within the natural hazards management sector.

Agencies with responsibilities for public lands and parks typically have the highest number and highest proportion of Indigenous-identifying staff. Conversely, emergency services agencies typically have the fewest number and lowest proportion of Indigenous staff. In several instances, emergency services agencies have no known Indigenous employees.

Despite the consistent under-representation of employed Indigenous people over the time period investigated, the employment data indicated minor increases are occurring in both the number and proportion of Indigenous staff in many agencies. 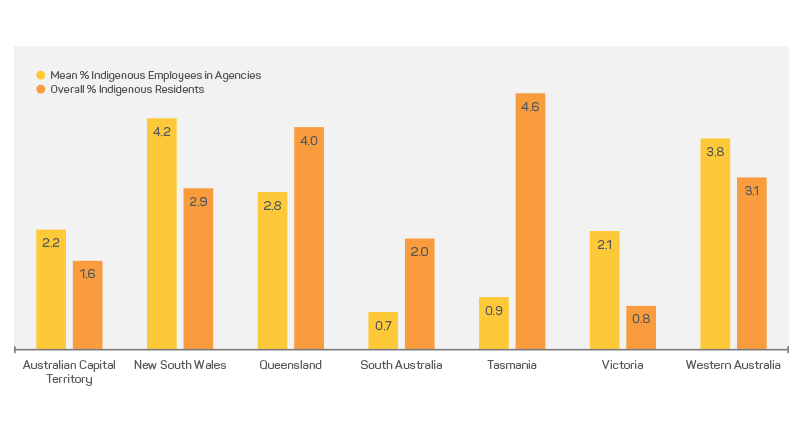 Note: Overall % of Indigenous Residents is based on Aboriginal and Torres Strait Islander population data according the Australian Bureau of Statistics 2016 Census of Population and Housing.

This study suggests that Indigenous peoples are statistically under-represented in the natural hazards management sector in southern Australia. At the same time, it raises the question of what a marker of ‘good’ representation might be. Should agencies be trying to increase overall Indigenous peoples representation in the workforce, or should they aim for higher representation across all organisational levels, or all levels and districts? Current targets for Indigenous employment within specific agencies, where they exist, are typically set at the scale of the total workforce.

This research highlights the potential benefits of consistent and detailed diversity and inclusion data and highlights the limitations of interpreting data without a contextual analysis. In addition to collecting and reporting data on the relative proportion of total employees, agencies would benefit by collecting and reporting data on the geographic distribution of Indigenous employees as well as their employment levels and divisions within the organisation. This information can help agencies achieve clearer accountability in relation to their employment targets and policies as well as inform Indigenous individuals and communities about employment trends. State and territory jurisdictions with large holdings of Indigenous lands, particularly in remote areas such as Western Australia and Queensland, could be expected to exceed target averages for Indigenous employment.6

It is worth noting that increasing Indigenous employment is not necessarily a priority for Indigenous peoples themselves, particularly given the priority many place on the funding of their own independent governance institutions as the basis for their greater involvement in public sector land management. Nonetheless, there are signs of increased Indigenous involvement within the natural hazard sector, particularly through collaborative fire management initiatives (see Maclean, Robinson & Costello 20187, Neale et al. 20198, Robinson et al. 20169, Smith, Weir & Neale 201810). The natural hazards management sector should prioritise supporting these engagements as part of their commitment to the resilience of Indigenous peoples and their communities.

This research was supported by the Bushfire and Natural Hazards Cooperative Research Centre. The authors also thank the many people within natural hazards management agencies who helped provide employment data for this study.

What we can learn from Japan’s tsunami experiences, Len Morris, ACT State Emergency Service In 2011, a catastrophic tsunami ravaged the north-east coast of Japan, causing devastating damage to the prefectures of Iwate, Miyagi and Fukushima. Len Morris, born and raised in Miyagi Prefecture, writes that we can learn a lot from Japan’s disaster education practices to reduce the risks to people.
Publication: