Building an animal-ready community: a community-led initiative to improve preparedness, planning and safety for animals and their owners

In Australia, 62 per cent of households have pets, which presents opportunities for activities that incorporate planning and response for pets and animals during times of emergency and in the recovery stages that follow.

Animals provide an avenue to connect communities. This offers a subject to engage community members to work together in emergency preparedness and planning. In Australia, 62 per cent of householders own pets and the majority consider them to be family members.1 In addition, many households also have other non-pet animals, with which they have special bonds and will be motivated to protect and save in an emergency, such as horses, pet livestock and chickens.

The Managing Animals in Disasters (MAiD) project is part of the Bushfire and Natural Hazard CRC research program to identify best-practice approaches to animal emergency management (AEM). The goal is to increase public and responder safety and improve animal welfare. As part of this research the MAiD project teamed up with a new community-led group based in the NSW Blue Mountains called Blue ARC: Animal Ready Community.

Community involvement in the creation of ‘animal-ready communities’ has been formalised for a number of years in the United States through Community Animal Response Teams (CART). CARTs comprise volunteers who are trained to respond in any emergency in their local community and enhance health and safety for humans and animals. In Australia, there is no equivalent initiative. Therefore, observing and supporting the Blue ARC group provides an opportunity to learn from the group start-up process, to be part of the development of various community-focused initiatives and to evaluate these outputs. The purpose of this partnership, beyond supporting the Blue Mountains community in AEM, is to distil and translate learnings into a generic guide for communities wanting to develop a similar community led group. This resource will be freely available and it is expected to comprise a brief ‘How to’ guide and an accompanying resource pack.

The guide can be used to promote emergency preparedness and planning through a focus on animals. It will include advice on group formation, agreement on group aims and objectives, identify challenges and potential opportunities and identify a range of activities that could be customised for different communities, and across hazards; many tried and tested by the Blue ARC group. The resource pack will include materials developed as part of the current work with Blue ARC, including a question bank for surveys, templates for posters and fact sheets and plans for low-cost community training.

The Blue Mountains area is regarded as the most bushfire-prone area in NSW. In October 2013, the area experienced its worst bushfires in over 30 years. Three fires burnt for four weeks, burning over 118,000 hectares of land and destroying 203 homes. Research following these bushfires identified the impact pets and other animals had on owner behaviour.3 Many pets and other animals died in these fires. Although no official record of pet deaths was compiled, the longer-term effect has been recognised by groups and community members assisting with recovery including the Salvation Army, Red Cross, school teachers and counsellors. 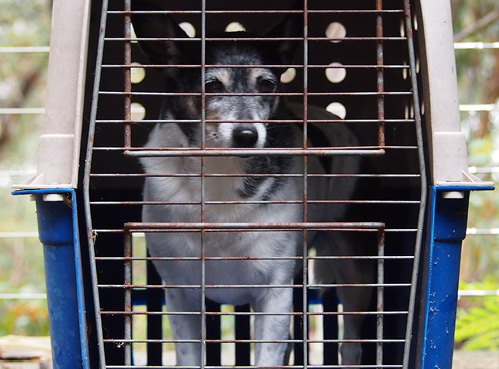 Shortly after the October 2013 bushfire, a group of community members produced a book about recovery after the fires. This book ‘As the Smoke Clears’ contained photographs of recovery of fauna and flora and was sold to raise money for the Blue Mountains Mayoral Bushfire Relief Fund. Many of these group members went on to form the Blue ARC group. This group received funding back from the Mayoral Bushfire Relief Fund and is auspiced by Springwood Neighbourhood Centre Co-operative Ltd. The group was formed in September 2015.

Blue ARC’s central goal is to support community resilience in emergency events through better awareness, preparedness, planning and response for companion animals, livestock and wildlife. To achieve this, the main activities of Blue ARC have been to: Before developing materials, it was important to establish the needs of the community and of responders; their barriers and challenge, and the information and resources needed. Four activities have been undertaken, and are at varying stages of completion.

Community survey – more than 300 residents have completed an online survey about their preparedness and planning for their animals, their needs, their expectations and their interests in training and education in this area. This information is being analysed and used to prioritise activities and development of support materials as well as present to, and ask questions of, various response and recovery agencies and local groups.

Audit of local veterinary services – one of the early findings from the survey was the importance placed on local veterinarians as sources of information and assistance with animals in an emergency event. Given the special role of veterinarians, local veterinary practices were surveyed to identify specialist services offered, perceptions of their role during emergencies, their needs (training, resources) and the previous support given to the community in the 2013 fire.

Interviews with key stakeholders – interviews are being undertaken with key agencies, local groups and organisations to understand what has been done in past events for animals, their owners and for wildlife and to address the various needs of community, identified from the survey. This work is ongoing and will inform other outputs.

Developing low-cost community training – we are working with a local veterinarian to develop short community workshops and YouTube video resources based on community needs and interest in basic information and skills training . This activity is in its early stages but will include pet first aid training, basic animal and wildlife handling skills and emergency preparedness for animals.

Raising awareness and engaging the community

To raise awareness, the Blue ARC group is involved in four activities:

School art competition – as a pilot activity, an art competition challenged children at Winmalee Public School to draw or paint their favourite animal and to say why that animal is important to them. Although this activity is not bushfire-specific, it is focused on why animals matter to children and (indirectly) why they need to be considered during emergencies. Over 322 entries were judged and winners selected in September 2017. All entries will be compiled into a book for sale at the school’s Grandparents’ Day. Due to local interest, this activity will be expanded to other schools in the region in 2018, with an emergency preparedness theme. Animal preparedness factsheets (Chickens) – a set of species-specific factsheets will support animal owners to plan and prepare for their animals. These will include animal-preparedness information and locally specific information e.g. local association contacts and specialist veterinary care. As chicken ownership is prevalent in the Blue Mountains and survey results suggest that chickens are poorly prepared for in emergencies, the first factsheet will be developed for chicken and poultry owners. This is being developed with the assistance of interest groups and a local vet. Emergency preparedness poster – the community survey identified vulnerable populations, including multiple animal households and elderly residents who may be ill-prepared or had potentially unrealistic expectations of themselves and their ability to evacuate their pets in an emergency. To address this, Blue ARC teamed up with the Blue Mountains Resilience and Preparedness Group to produce an emergency preparedness poster showing a (positive) image of a well-prepared older person ready to evacuate with her dog and chicken. This poster is being displayed at council facilities, vet clinics, neighbourhood centres and other community locations with an accompanying flyer prepared with a list of links to resources produced by NSW RFS, NSW SES, NSW DPI and others, to assist with preparing for animals in emergencies.

‘Get Ready Weekend’ activities – Blue ARC and the Resilience and Preparedness Group will be involved in local NSW RFS bushfire preparedness activities by distributing emergency preparedness flyers, identifying potential animal carrier options and suppliers and promoting access to resources produced by NSW RFS, NSW DPI and other official sources as well as the database for local vet clinics and boarding options.