Review: Fire Mountains of the Islands: a history of volcanic eruptions and disaster management in Papua New Guinea and the Solomon Islands. By R. Wally Johnson. 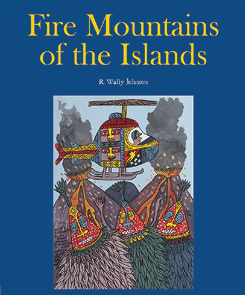 Very few Australian disaster managers will ever be called on to respond to a volcanic eruption at home. The last active volcano on the Australian mainland ceased activity about 4000 years ago. Their counterparts in our northern neighbours, in the arc extending from Indonesia, through Papua New Guinea (PNG) and down into Solomon Islands and Vanuatu, are much more familiar with such events and their experience in managing such major disasters holds lessons for us all.

Wally Johnson’s passion for volcanoes and the people who live in their shadows shines through in this book which concentrates on the volcanoes of PNG and Solomon Islands and their eruption histories. He elaborates on how that history and modern technology together are being used to understand the threats posed and thus make the people who are at risk a lot safer. This is not a dry scientific publication, rather it is written for a general audience and reads much more like an adventure story than a text book.

The lessons contained in some of the case studies and the accounts of how they were managed are as applicable to any other natural disaster such as bushfire, flood or cyclone as they are to volcanic eruptions. The 1937 eruption that did much damage to Rabaul and killed 500 people led to the establishment of the first scientific monitoring of volcanoes in the region. It also led to the promulgation of emergency information to all households within the Rabaul township. Certainly in the 1960s I recall that every house in Rabaul had an information poster detailing what to do in the event of an eruption—one of the earliest community awareness programs run by Australia.

The tragedy of the massive 1951 Mt Lamington eruption on the northern side of Papua’s Owen Stanley Range remains Australia’s worst disaster with some 3 000 dead. The heroics of the local survivors, as well as the numerous government and mission workers who rushed to the area to bring relief, is a story that deserves much wider exposure. The experience of the Lamington eruptions, however, made government officials highly sensitive to threatened eruptions in other volcanoes. When Bam Island showed signs of activity in 1954 the Bam Islanders were forcibly evacuated to the mainland. They were resettled on swampy land and unhealthy area and 24 evacuated Bam Islanders died before the population was returned to their island. As Johnson observes, ‘an evacuation based on scientific assessment of the volcano and recommended with the best of intentions, was turned into a tragedy’.

Naturally the 1994 eruption of the Rabaul volcanoes that led to the permanent abandonment of much of the town receives a lot of attention, but here again the lessons to be learned are important. A very aware community, both local Tolai people and expatriates, self-evacuated even before the official warning to evacuate was given. Only four people died in this eruption which was very similar to that of 1937, though the destruction, both from the eruption and from the uncontrolled looting and vandalism that followed, left both citizens and authorities in shock.

Perhaps the most controversial discussion relates to the effectiveness of scientific monitoring, early warnings and false alarms. Johnson lists 13 Papua New Guinea volcanic events that led to evacuations. Of these evacuations nine took place without them first being declared by authorities and, of the remainder, only one was based on instrumental warning of an impending eruption. Johnson’s conclusion is that reliance on the monitoring and warning technologies should always be balanced by a comprehensive disaster risk assessment, local knowledge, and effective and ongoing community awareness. How often have we heard that conclusion after a bushfire or flood!

Fire Mountains of the Islands is available as a free download at http://epress.anu.edu.au/titles/fire-mountains-of-the-islands or can be ordered in hard copy for $40 from the same address.