Hundreds of participants from across the emergency management sector, both in Australia and internationally, have participated in the Bushfire CRC’s Research To Drive Change series of online research forums held from May to October this year.

The series presented the findings of the Bushfire CRC’s research program (2010-2014), delivering scientific insights into ways of making both communities and firefighters safe, as well as vastly improving forecasting and modelling. Other topics in the series included community safety, ecology, incident management and economics to aid decision-making.

Each of the forums involved a documentary-style video summarising the research findings, together with a Fire Note and in-depth research reports. These resources, together with a complete video of each forum, are available on the Bushfire CRC website for replay and downloading.

One of the first forums covered Next Generation Fire Prediction, which proved to be one of the most popular. The forum was held in May 2014 with more than 120 people logging in on the day to join the researchers for the interactive webinar.

The collaborative research project produced the Fire Impact and Risk Evaluation Decision Support Tool (FireDST), a proof-of-concept simulation system that aimed to provide critical fire planning information to emergency services, government, and the public. FireDST is an advanced software program that could be used to understand the potential impacts a bushfire may have on community assets, infrastructure and people. FireDST demonstrates the prediction of probabilities of both neighbourhood and house loss, as well as the potential health impacts of bushfire smoke and the areas likely to be affected by a bushfire.

The Paying the Price forum featured research that investigated the role of economics in the management of bushfire strategy and its execution.

Case studies of integrated assessment of fire risk management strategies in the Central Otago region of New Zealand and the Mount Lofty Ranges in South Australia were used to demonstrate how fire-prevention strategies could provide value for money. 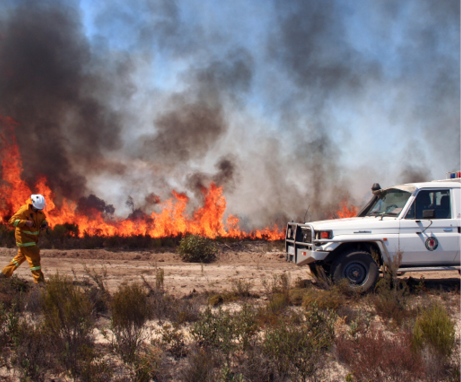 Research investigated the economics of prescribed burning with case studies in South Australia and New Zealand.

Power to the People

The concept of shared responsibility and the broader implications for legislative, policy and planning processes were examined in the Power to the People forum. More than 90 participants logged on for the event. The aim of the research featured in the forum was to develop a deeper understanding of shared responsibility and the role of planning, policy and legislative processes as key drivers of change in risk management. The research also investigated emergency management policy and law, as well as urban planning and its role as communities expand into the rural/urban fringe.

What are you telling us?

The role and scope of communication in bushfire preparedness and response was the focus of the What are you Telling Us? forum. It explored ways to engage communities and individuals living in fire-prone areas in community safety initiatives.

The researchers, led by RMIT Professor Peter Fairbrother, examined the complexities of how people in these different localities organised and operated. The study investigated their formal and informal networks, and how individuals and groups within these ‘social networks’ relate and communicate with each other, as well as with emergency services agencies.

The researchers suggested that communication should be interactive and tailored to the complexity and diversity of each locality to have lasting and measurable impact. That diversity included a broad range of factors, such as differences by locality, class, economics, ethnicity, gender and age.

Communicating about bushfire was studied, exploring ways to engage communities and individuals living in fire-prone areas in community safety initiatives.

Living on the Edge

The Living on the Edge forum attracted more than 90 participants who joined the conversation about perceptions and reality of risk in bushfire prone communities.

Professor Ross Bradstock from the University of Wollongong and Associate Professor Ruth Beilin from the University of Melbourne, together with industry representative Mike Wouters of South Australia’s Department of Environment, Water and Natural Resources, detailed extensive research findings on householder perceptions of fire risk and how these shaped bushfire preparedness.

Professor Bradstock’s research indicated that people living in fire-prone areas recognised fire risk, but may have treated it as a lower priority than other lifestyle values and factors, such as lack of time, cost barriers, and aesthetic quality.

Dr Beilin’s study provided a ‘mud map’ mechanism for householders to visualise and reflect on the fire risk in and around their properties so they could take action. The technique could be a useful tool for community safety educators to talk to people about fire risks and to identify ways to safeguard their properties and increase their chances of surviving a bushfire.

Fire in the Landscape

Fire and its impact on water, air and land featured in the Fire in the Landscape forum. This forum turned the spotlight on the findings of four key projects by University of Melbourne and University of Sydney. Researchers looked at the impact of fire on water quantity and quality and the changing nature of carbon stores (above and below the ground).

The first two studies focused on the role of planned and unplanned fire and the impact on water quality and quantity from catchment forests in south eastern Australia. The other two studies concentrated on the quantification of carbon losses during fire; a key issue emerging from climate change and increasing greenhouse gases within the atmosphere.

The Thinking Under Fire forum investigated how people behave and make decisions in response to stressful conditions such as the threat of bushfire.

The Awake, Smoky and Hot! forum examined health and safety issues for frontline emergency management workers, including the impact of toxicity from fire emissions.

The Beyond the Incident forum investigated information flow, communication, capacity to adjust to emerging scenarios, breakdown in co-ordination, training and education, and how changes to these elements support more effective incident management.

The Bushfire CRC has now concluded, but embedding its research findings into agency practice continues. To replay all forums and documentary videos for free, visit www.bushfirecrc.com/drivechange.