Review: People's Response to Disasters in the Philippines, by J.C. Gaillard 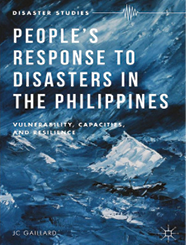 J.C. Gaillard is a widely published disaster researcher based in New Zealand. In this book he brings together a number of case studies on people’s responses to disasters in the Philippines, through the lenses of vulnerability, capacities and resilience.

The Philippines is one of the world’s most disaster- prone countries, located as it is on the typhoon belt and the Pacific volcanic rim. Flood, cyclone, landslide, volcanic eruption and earthquake are common. Between 1900 and 2013, 537 disasters have killed 60 000 people and directly and indirectly affected millions. But Gaillard challenges the orthodoxy that holds that it is nature’s extremes and poor risk perception leading to inadequate behaviours that define the scope and damage of disaster. He argues that catastrophe not only lies in the triggering of natural hazards but rather is entangled in deeper socioeconomic and political factors. He also questions the focus of climate change as the main creator of future disasters, arguing that this focus distracts from the root causes of vulnerability to disaster.

The book is in three parts, the first dealing with vulnerability, which he defines as ‘the susceptibility to suffer from a potentially hazardous event’, referring to those conditions of a society that turns a natural hazard into a disaster. In answer to his question, ‘Why did 1400 people die in late 2004?’, he examines the disaster in which four successive tropical depressions and cyclones lashed eastern Luzon, bringing heavy damage and loss of life. He makes a detailed case that the three root causes of the disaster were not natural but were illegal deforestation of tropical mountain slopes, exacerbating landslides and floods; the migration of lowlanders to the mountains when they were deprived of access to land; and the oligarchical politics that allowed these things to happen.

Part two challenges the idea that those who suffer from disasters are helpless victims, making the case that communities bring inherent capacities to disaster. He found that when confronted with increasing and recurrent flooding the people of Pampanga made a wide range of adjustments in their daily life in order to cope. They were unable to rely on external aid and so reduced their food intake, cancelled celebrations, postponed the repayment of loans to family and friends and found other money-making activities. And here the role of women was signal—as it is in Australian drought-affected communities where women worked off-farm to support the farm’s survival. Social networking was critical, based in an indigenous sense of community and including the sharing of labour.

Gaillard makes a plea for local capacities to be integrated with disaster recovery policy, requiring that the local knowledge, skills and resources are used by both local and outside stakeholders. He admits that this is difficult because local capacities rely on intangible resources like social networks, folklore and the memory of past events. To assist with making the intangible tangible, he introduces three techniques for capturing community knowledge: participatory mapping; disaster risk assessment; and P3DM (participatory three dimensional mapping), by which the community builds a three dimensional model of community vulnerabilities and assets. This critique of the techniques is immediately useful to Australian communities and policy makers.

To enhance community capacity Gaillard recommends the mainstreaming of marginalised groups and their capacities. Marginalised groups may be assumed to be vulnerable in disaster and yet their capacity often goes unrecognised. Take the case of the baklâs, of Irosin. Although nowadays often considered as gays, and sometimes transsexuals, the identity of baklâs in this context is more ambiguous and refers more to the performance of gender than to sexual orientation. In a society where tasks are clearly differentiated by gender, the baklâs are able to switch from male to female-orientated tasks and responsibilities and are acknowledged for their leadership in community activities.

Young people are also generally considered to be vulnerable in disaster and yet are knowledgeable about the local environment, dedicated to community activities, and keen to make a contribution after the event.

In part three Gaillard demonstrates how community participation in post-disaster recovery is essential to fostering long-term resilience. He uses the case of the Aeta people of Mt Pinatubo to illustrate how they have maintained the flexibility and durability of their traditional society in the face of the Mt Pinatubo volcanic eruption and the many subsequent lava flows and landslides.

This book is highly recommended to scholars and emergency management practitioners alike for its excellent exposition of the often used concepts of vulnerability, capacity and resilience in the context of well researched case studies.