When the Director of Disaster Preparedness and Response from the National Critical Care and Trauma Response Centre, Matt Harper, landed in Vanuatu in March this year, he was awestruck by the devastation caused by Tropical Cyclone Pam.

A highly-trained emergency manager and team leader for the Australian Medical Assistance Team (AusMAT) mission to Vanuatu, Matt Harper has been involved in many disaster responses in his former role at Emergency Management Australia.

The AusMAT arrived only three days after the cyclone and what Matt most noticed was how the chain of Pacific islands had been stripped bare.

‘There was not a leaf on a tree. Things like chickens, which are an important part of the food supply, were missing, probably blown away during the cyclone,’ said Matt.

Matt was also struck by the dedication of the Aussie medical team.

‘They were incredible. I realise now why medicine is a calling rather than just a job,’ he said.

The NCCTRC enhances Australia’s capacity to provide clinical and academic leadership in disaster and trauma care. The NCCTRC has played a crucial role in response operations such as Typhoon Haiyan in the Philippines. It has established itself as the regional leader in providing trauma and disaster training.

Matt Harper comes from a non-clinical background. ‘It was different for a non-clinical person to be leading a medical team but it worked very well. In a complex disaster like Cyclone Pam, the last thing we wanted was for clinicians to be spending their time on meetings and logistics. That would be a terrible waste of talent. You should use that talent where it’s most needed,’ he said.

The Category 5 cyclone destroyed much of Vanuatu and was the most intense to have occurred in the Pacific region since Cyclone Zoe in 2002. The NCCTRC had been monitoring the development of Cyclone Pam and had started preparing in the days before impact. This allowed a response to be mobilised as soon as the Australian Government issued the request. The first resources, a three-member Rapid Response Team and four-member Initial Treatment Team, were sent to Vanuatu within 48 hours of the cyclone hitting Port Vila. The teams worked alongside local medical professionals at Port Vila hospital or assessed the ability of communities to deliver health care.

Meanwhile, the main body of the AusMAT – made up of an additional 13 Territorians and seven Victorians – flew to Port Vila with 17 tonnes of medical and logistics equipment.

The teams set up three air conditioned temporary wards in the car park at Port Vila Central Hospital where AusMAT clinicians treated 1341 patients and helped with the delivery of 92 babies.

Despite the challenges of driving a multi-jurisdictional project, the AusMAT is now in a position to access the very best of clinical staff from around the nation for health emergencies. This was well-demonstrated in the deployment to Tacloban City in the wake of Typhoon Haiyan, when every state and territory had the opportunity to send clinical staff.

The diversification of this capability commenced in late 2014 during the Ebola virus epidemic. The NCCTRC now has infectious disease epidemic response as a strategic objective for the coming years. 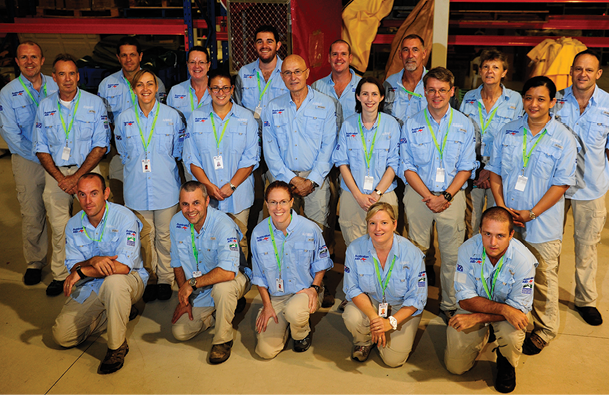