Historical Reflection: The use of archaeologists at disaster scenes: a reflection 10 years on 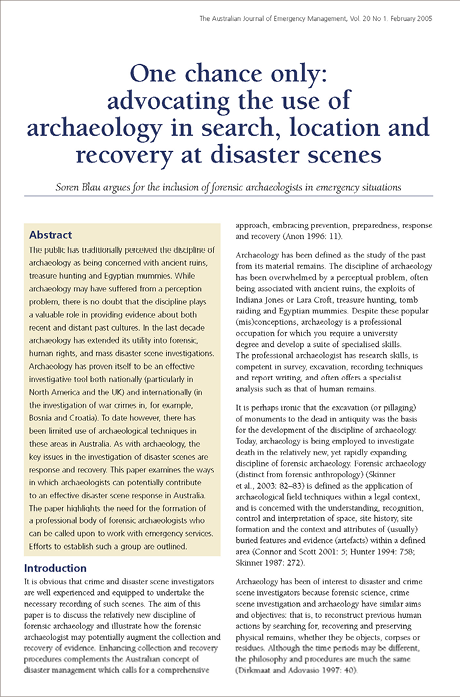 In 2005, Dr Soren Blau summarised the ways in which the inclusion of appropriately trained archaeologists at disaster scenes could benefit the search, location and recovery of buried evidence. The article outlined how archaeology had been an effective forensic sciences tool domestically and internationally in many countries but that it had not been taken up in the same way in Australia. It was recognised that the situation in Australia was more than likely a result of misconceptions about the role of archaeology, namely that the discipline is associated with treasure hunting, tomb raiding and laborious recovery of remains. In an attempt to dispel this misconception, a preliminary workshop was held in 2003 at the University of Adelaide which brought together professional archaeologists and representatives from emergency and forensic services to discuss how each of the areas potentially overlapped and where archaeologists could assist. It was anticipated that this workshop could lay the foundation for the development of a formalised database of names of professional archaeologists who could advise and assist forensic and emergency services where required. While some agencies did receive the list, a professional group of Australian forensic archaeologists was, unfortunately, never formed. While there are organisations such as NSW Police who have an Expert Referral Team which includes forensic anthropologists with expertise in the recovery of buried evidence, there is no established formal group of forensic archaeologists. This differs to the situation overseas where professional organisations have been established (e.g. NecroSearch setup in 1991 in the USA and the Forensic Search and Advisory Group established in the UK in 1995). Such organisations provide a register of appropriately trained forensic anthropology/archaeology practitioners that law enforcement and emergency services organisations can consult when required. 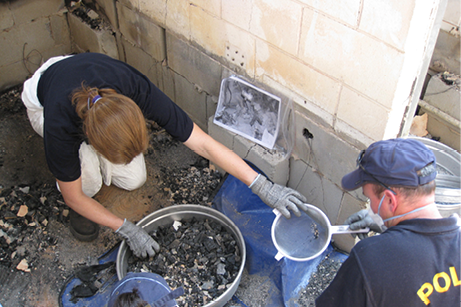 A forensic anthropologist and VicPol assist in the examination of a scene following the 2009 Victorian bushfires. Image: Soren Blau

Forensic archaeology (Hunter & Cox 2005, Hunter et al. 2013) and forensic anthropology (Blau & Ubelaker 2009, Dirkmaat 2012a) have emerged as distinct disciplines in the UK. However, there are no such divisions throughout Latin America and in the USA where many forensic anthropologists are trained in archaeology and incorporate the methods and techniques in their daily work. In Australia, many of the forensic service providers employ forensic anthropologists, some of whom have training in archaeology (Donlon 2009). The value of including such practitioners at disaster scenes was seen during the disaster victim identification DVI process following the 2009 Victorian Bushfires (Blau & Briggs 2011).

While forensic archaeology is still not an independent, recognised discipline in Australia, efforts to raise awareness about the benefits of including a forensic archaeologist and/or anthropologist where evidence (including human remains) may be buried are continuing in the form of training and education for relevant stakeholders. For example, the Victorian Institute of Forensic Medicine has delivered training in the location and recovery of buried evidence to Australian Federal Police crime scene examiners (Blau & Sterenberg in press A) and, more recently, in collaboration with the Institute of Technology, Sydney, to Victorian Police crime scene examiners.

While Australian police and emergency services agencies still do not routinely recognise the value of including a forensic archaeologist and/or anthropologist at a disaster scene, the increase in recent national (Blau & Sterenberg in press B) and international publications on these subjects (e.g. Cheetham & Hanson 2009, Cox et al. 2008, Dupras et al. 2012, Dirkmaat 2012b, Groen et al. in press, Holland & Connell 2009) clearly highlights the benefits. It is hoped that with continued awareness raising the situation in Australian will begin shift.

Blau S 2005, One chance only: advocating the use of archaeology in search, location and recovery at disaster scenes. The Australian Journal of Emergency Management vol 20, no. 1, pp. 19-24.

Blau S & Sterenberg J In press A, The use of (forensic) archaeology in Australia in the search and recovery of buried evidence: A Review. In: Groen, M., Márquez-Grant, N. and Janaway, R. (eds.). Forensic Archaeology: A Global Perspective. Wiley-Blackwell.

Blau S & Sterenberg J In press B, The use of forensic archaeology and anthropology in the search and recovery of buried evidence. In: Payne-James, J. and Byard, R. (eds.) Encyclopedia of Forensic and Legal Medicine (2nd edition). Elsevier.

Dirkmaat DC 2012a, A Companion to Forensic Anthropology. Wiley-Blackwell.