Safeguarding children from animals in emergencies

Susan Davie, Save the Children, explains why planning for animals
provides a point to include simple child safeguarding activities.

Children are particularly vulnerable when disasters occur yet their unique needs are not routinely addressed in Australian emergency management plans. In contrast, planning for the needs of animals is becoming standard practice with a primary aim to address animal welfare issues and protect communities. There is opportunity when planning for animals in emergency management to address child safeguarding with regard to both physical and psychological harm that can be caused by stressed animals or the loss of a pet. These are issues that arise predominantly in the relief and recovery phase. This paper explores some key areas that should be considered when reviewing emergency management plans and suggests that planning for animals can provide a point to include simple child safeguarding activities.

Emergency management planning for the needs of animals occurs at a national, state and local level with a focus on helping people make decisions about their response in emergencies, animal welfare, and protection of livelihoods. In stark contrast, emergency management practice in Australia does not routinely address the unique needs of children (Davie 2013). Historically, animal protection laws preceded legislation to protect children. The cruel neglect of the child Mary Ellen in New York in 1874 raised the issue of the lack of formal protection for children. Concerned neighbours asked a missionary to check on the child and there was evidence of physical abuse, malnourishment and neglect. With no legislation in place a group of concerned citizens brought the matter before the courts under existing animal cruelty legislation (Tomison 2001). The case was successful and the child was granted protection. This laid the foundation for the development of the child welfare sector.

Protecting children is seen as a vital role of government and the foundations for Australia’s systems stem from the 1860s with child welfare formalised through legislation (Swain 2014). The first animal protection, anti-cruelty legislation was enacted in the 1830s (White 2007). Emergency management practitioners have ensured that planning encompasses animal welfare but have not been as proactive with regard to the needs of children. This issue has been recognised in other high income counties, perhaps most notably in the United States where the National Commission on Children and Disasters was established by the US President following Hurricane Katrina. The commission’s interim report coined the term ‘benign neglect’ with respect to the unintended neglect of children in emergency management practice due to the lack of focused planning for their needs (National Commission on Children and Disasters 2009).

Children are particularly vulnerable when emergencies and disasters occur and this has been well documented (Allen et al. 2007, Anderson 2005, Gribble & Berry 2011, Peek 2008). When reviewing and updating emergency management plans every opportunity should be taken to ensure the needs of children are included. A focus on safeguarding children from harm from animals can provide planners with tangible areas within their plans that can be updated to include practical child safeguarding activities.

One key area that provides a tangible focus for emergency management planners to review and update their plans is in the relief phase of emergencies. The needs of animals are outlined in the Emergency relief handbook, which includes planning considerations for children and animals (Australian Red Cross and Victorian Department of Human Services 2013). However the handbook does not highlight opportunities where the inclusion of child safeguarding activities can be taken in regard to hazards that may be posed by animals.

Catering for companion animals in relief centres will alleviate stress of both pets and their owners. However, if companion animals are present in relief centres and their precincts there are hazards to children that must be considered. It may not be possible to have all animals in cages and dogs may be tethered on leads. Safeguarding children from bites and scratches is vital to ensure that children do not sustain injuries that may require medical attention. Every effort should be made to ensure that children are not able to access areas where companion animals are sheltering unless they are accompanied by an adult. Parents and carers should be informed of the risks of injury from animals and children should not be allowed to touch animals that do not belong to them. All pet owners and evacuation centre staff should be aware of this safety requirement.

In some cases children may be comforted by petting their companion animals. This may help with the psychosocial impacts of the emergency, but health risks should be considered. Stressed animals can be uncharacteristically aggressive and there should be an adult present at all times when children are with their pets.

When children are in contact with their pets, it is important they are able to wash their hands after touching animals. If hand washing facilities are not child-friendly, consider a bucket of water with soap that children can easily reach. Ideally this would be located close to the animal area to encourage hand washing when contact with the animal finishes. Hand sanitisers are another option but are only effective if hands are free of grime and dirt, so soap and water will be required after handling animals. This is a simple addition to evacuation centre procedures. 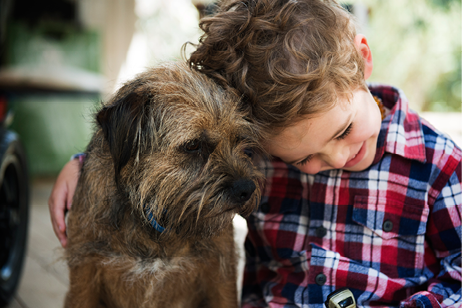 Children and pets share a special bond within a family. Image: Rob McKechnie from Save the Children.

In some locations, large animals may also be present at evacuation centres and stressed horses and other stock can pose a risk to children. Large animals have the potential to cause injury and children are particularly vulnerable due to their small size and stage of cognitive development. Parents and carers should be informed of the risk and asked not to allow children to go near large animals that may be in the vicinity of the evacuation centre.

Every opportunity should be taken by emergency management practitioners to incorporate the unique needs of children into their planning. Planning for the needs of animals is an important aspect of emergency management practice and applying a child-focused lens provides a tangible point in the planning process to ensure that children are safeguarded from hazards posed by animals.

National Commission on Children and Disasters 2009, Interim Report. At: http://archive.ahrq.gov/prep/nccdreport/nccdreport.pdf.

Tomison AM 2001, A history of child protection. Back to the future. Family Matters, p. 60.

White S 2007, Regulation of animal welfare in Australia and the emergency Commonwealth: Entrenching the traditional approach of the states and territories or laying the ground for reform? Federal Law Review, p. 35.