Achieving a global goal for the protection of animals in disasters: India's potential impact

Every year millions of animals and their owners are affected by natural disasters. Animals are affected in the same way as we are and millions of animals are killed or injured as a result. Most of the world’s poorest people are heavily reliant on animals for their food security and livelihoods. Animals are also companions and are valued family members. Yet often, animals are not included in response plans, recovery projects, contingency planning and risk reduction measures, due to a number of reasons. These include insufficient knowledge and skills, lack of resources, unassigned responsibility and a lack of organisation.

Protecting animals must therefore be an integral part of effective emergency planning and response. Integrating animal welfare into disaster risk reduction, resilience and preparedness planning will significantly reduce suffering, facilitate and accelerate recovery, and limit post-disaster aid dependency. This article looks at the approach India is taking with disaster management and discusses what learnings Australia and New Zealand might benefit from or build upon.

World Animal Protection aims to achieve global change for the protection of animals in disasters by encouraging countries to adopt or adapt disaster management systems implemented by other countries. In one respect it’s also about not ‘reinventing the wheel’. While it is unlikely that one country can or would pick up one country’s disaster management system in its entirety and overlay it on its own infrastructure, there are many overarching high-level principles and discrete systems that other countries might wish to adapt.

India is vulnerable to natural disasters with more than 75 per cent of its states being disaster-prone. Much of India’s coastline is susceptible to cyclones and tsunami while around two thirds of the landmass is prone to earthquakes and droughts. Flooding is also a common event1. During the last 30 years, the country has suffered over 400 major disasters. Each year India experiences average disaster losses of US$1billion. Direct natural disaster losses amount to two per cent of India’s GDP and up to 12 per cent of central government revenue2.

The majority of livestock (nearly 70 per cent) is owned by 67 per cent of small, marginal farmers and landless people3. Therefore, as in many other countries, vulnerable members of the community are most at risk (or least resilient) when a disaster strikes with potential devastating long-term effects on their livelihoods. Hundreds of thousands of animals suffer during disasters in India annually. On average nearly 100 000 cattle are lost annually.

India recognises the importance of including animals in disaster planning. The National Policy on Disaster Management 20094 states that:

‘It is necessary to devise appropriate measures to protect animals and find means to shelter and feed them during disasters and their aftermath, through a community effort, to the extent possible. The Departments/Ministries of the Government of India …… and the States concerned should devise such measures at all levels.’

One such agency is the National Disaster Response Force which is a disaster response agency under the direction of the National Disaster Management Authority. Established in 2009 for disaster management and specialised response to natural and man-made disasters, it consists of ten battalions of central armed police forces and functions at a state and central level. While historically the National Disaster Response Force has principally been concerned with human welfare in natural and man-made disasters, due to the influence of World Animal Protection it has increasingly become involved in animal welfare. Veterinary teams associated with the battalions are developing animal welfare and medical expertise (through World Animal Protection) in disasters and, in the future, will provide rescue and veterinary services for animals immediately following a disaster. 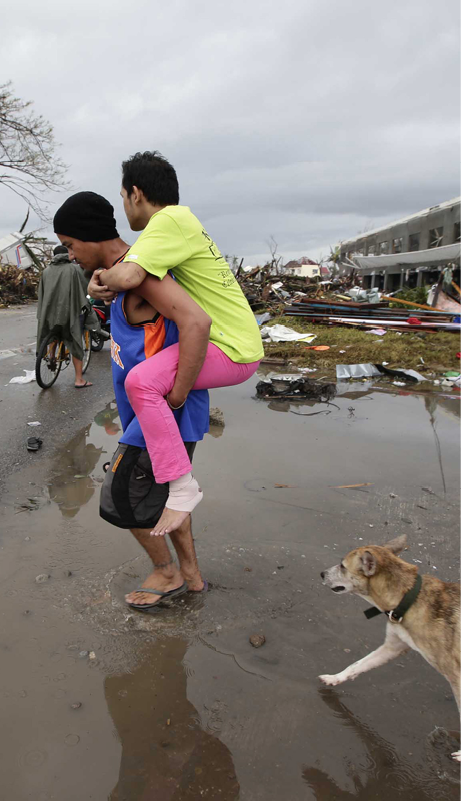 Humans and animals are involved in disasters and care for both is important. Image: World Animal Protection

Protecting animals in disasters is not only good for animal welfare it’s also about saving productive assets. The loss of animals in disasters can devastate people’s livelihoods. Livestock represents a safety net for many families and the loss of such productive assets will impact significantly on lives and livelihoods. Including animals in disaster loss mitigation strategies is a secure and economical long-term investment5. One cost benefit study carried out in India following the Assam floods long-term response (2012-2013) showed a US$96 benefit for every $1 spent6. This was largely due to the assistance provided by World Animal Protection, which included preparedness training for emergencies, preparation of village veterinary disease management plans, provision of educational materials, preparation of household veterinary first aid kits, a disaster risk reduction workshop, and construction of animal shelters.

One method of assessing progress is to apply the World Animal Protection Four Pillars of Change model. Policy is a statement by the government that drives legislation, co-ordination and resourcing in emergency management. India does have a national policy in which the government formally recognises the importance of including animals in disaster planning and outlines responsible parties. The New Zealand Animal Welfare Strategy7 has a requirement for better planning to prevent animal welfare problems in adverse events. The Australian Animal Welfare Strategy and National Implementation Plan8 (developed by the Australian Government in conjunction with Australian states and territories, and now managed by the states and territories) makes reference to improving planning for animals in disasters.

Legislation legally defines who is responsible and what the minimum requirements are in delivering this responsibility should an emergency arise. While India’s Disaster Management Act 2005 is principally focused on human welfare in emergencies, it is intended that animal welfare will be integrated into India’s national plan and programs as well as state and district disaster management authorities’ policies, plans and programs by 2017. Currently World Animal Protection is working collaboratively at both a central and state (five states) level to assist with the incorporation of animal welfare into both national and state plans. It is clear that it is important to define responsibilities in an emergency both at the planning and the response stages.

In Australia each state and territory has emergency management legislation and an emergency management plan. These integrate animals to varying extents. In addition, Australian states and territories have recently endorsed the National Planning Principles for Animals in Disasters9 that provides guidance for the drafting of disaster management plans. A number of the states and territories are making solid progress in operationalising the policy guidance following endorsement. New Zealand has two pieces of legislation that define who is responsible for animals in emergencies.

National co-ordination means that animal welfare delivery needs to be co-ordinated and resourced appropriately while Organisation denotes co-ordination of existing assets and the creation of new assets for the most appropriate management of animals in disasters. The two concepts are more conveniently discussed jointly. Together they probably present the biggest challenge for governments and communities. While it is relatively straight forward to put policy and legislation in place and it is reasonably inexpensive, it is more problematic, complicated, and fiscally challenging to resource capacity building and disaster management infrastructure across a nation.

India is fortunate to have a well-defined disaster management structure. This in itself is an important learning for any country. This infrastructure coupled with a strong commitment to animal welfare by India’s current government should provide the co-ordination and allocation of animal welfare delivery, once animal welfare is integrated into India’s national and state plans and programs; intended by 2017. This also applies to co-ordinating existing assets and the creation of new assets for the most appropriate management of animals in disasters. In addition, there is a plethora of support agencies. Currently it has been identified that resources are still lacking for effective animal handling and rescue operations, structural facilities holding animals in emergencies, and trained human resources for managing animals in emergencies.

One of the noteworthy learnings from India is its joint approach to disaster management as the government recognises that it cannot achieve this alone. It is therefore working with many different agencies and entities to achieve the inclusion of animal welfare in government policy, plans and programs. An example is the acceptance of NGOs, such as World Animal Protection in the animal welfare space. The Indian Government recognises the expertise of World Animal Protection in disaster management and has committed to working collaboratively with the organisation for the betterment of the lives of animals in India.

This collective approach has allowed World Animal Protection to successfully encourage the development of a disaster management system. World Animal Protection is working co-operatively with government (via government ministries and the National Disaster Management Authority), state and district disaster management agencies, academic institutions (veterinary schools), humanitarian NGOs, and the National Disaster Response Force personnel. One example is a country-wide training program for veterinary students in emergency management that will ultimately result in a population of veterinarians (called Veterinary Emergency Response Units) with skills in veterinary emergency management who will not only be able to educate their clients on emergency planning for animals but also provide a capable veterinary resource during emergencies. This program does not exist in Australian and New Zealand veterinary curricula, although veterinarians in both countries often assist in disaster response. It should be noted that Tasmania has recently established a Veterinary Emergency Response Team to provide triage services to all animal species affected by disasters.

There are many other examples of this collaborative approach in India:

It is important to recognise the collaborative approaches Australia and New Zealand are also taking in the disaster management space. The interim National Advisory Committee for Animals in Emergencies in Australia involved stakeholders from all levels of government, industry, animal welfare and humanitarian NGOs and the National Veterinary Association. This Australian collaborative approach was highly successful. Disaster responses also result in many agencies working together. In New Zealand the current review of the National Civil Defence Emergency Management Plan is drawing together a number of agencies in recognition that a joint approach is necessary. However more can still be done, including, for example, joint conferencing, training and simulation exercises such as in India.

The frequency of natural disasters has increased exponentially in the last two decades. While the debate continues about the role of climate change, it is predicted that the frequency and intensity of natural disasters will continue to escalate10. Acknowledging the role of animals in our lives whether as production animals, working animals or companions behoves us to ensure that protecting animals is an integral part of effective disaster planning and response.

6 Economists at large, 2014, A benefit-cost analysis of WSPA’s 2012 intervention in the Dhemaji district of Assam, India / Final Report prepared for the World Society for the Protection of Animals, p. 7.

9 National Planning Principles for Animals in Disasters. At: www.australiananimalwelfare.com.au/content/pets-and-companion-animals/national-planning-principles-for-animals-in-disastersPCA.