Crisis Proofing: how to save your company from disaster 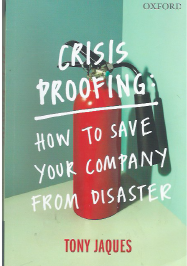 Crisis proofing requires leadership from the top and this book is devoted to that central idea. Tony Jaques succeeds in presenting an accessible guide to effective crisis prevention. His book provides numerous quotes from leaders (in or out of crisis) and practical examples of the good, the bad and the ugly in issue or crisis management.

Without oversimplifying the steps to successful issues management, Jaques writes for an audience with an assumed level of intelligence and capacity for reflection. His pragmatic style of writing generates a sense of ‘cutting to the chase’: a welcome relief as, too often, the desire to give the reader a ‘potted history’ of theoretical underpinnings ahead of the practical solutions ends up leaving readers bored.

While there may not be any major revelations in this book in terms of what is required to successfully prevent an organisation from experiencing a crisis, what it does do is highlight the pitfalls or misconceptions of implementing these approaches.

There are no punches pulled. Leaders are responsible for how their organisation emerges from a crisis and it all starts with leaving one’s ego, ‘bias towards optimism’ and ‘wilful blindness’ at the door. In fact, Jaques quotes a management report that states mindful leaders are required to avert crisis: ‘One of the most important things is having people around you who tell you how wrong you are’.

The book is not short on practical advice. In managing issues, Jaques’s recommended method is to take lists of identified issues and the myriad of corresponding understandings and place them into a simple management model—the ‘Do-it Plan’.

What seems like an obvious solution, those who have participated in countless planning meetings know that a practical plan is often the least likely outcome of such gatherings. In Jaques’s book, his ‘Do-it Plan’ is based on a simple equation: Problem + Impact = Issue.

Using examples he illustrates how an issue can be oversimplified thereby potentially creating ambiguity and impeding the development of an operational plan. He explains that by adopting the equation, an issue can be accurately defined and communicated enabling a focus beyond the problem itself and on its relevance or importance to the organisation.

The book discusses the ‘usual suspects’ of crisis management, crisis management teams, communications and aligning strategic planning with issues management. But what sets this book apart is his focus on the task not on the tools. Central to this, he proposes, is the quality of leadership; ‘While the facts and data are critically important, most issues and crises also revolve around human qualities and empathy’.

Jaques suggests that reliance on technical and legal skills to resolve crises can lead to ignoring or under-playing the ethical dimensions of a response to a crisis, often to an organisation’s detriment. One tool increasingly more important in managing the human dimensions of a crisis is social media.

The last part of the book focuses on the role of social media in a crisis, especially the speed at which information is shared. Jaques explains that while controlling the flow of information may not be possible, controlling your message can be mastered.

Citing the example of the Boston Police Chief who live-tweeted his decisions following the bombing at the Boston Marathon, the author proclaimed that it was an action that highlighted ‘…the power of human-to-human communication and his strong emotional intelligence’.

He elaborates on the use of technology, such as dark websites, and, towards the end of the book, on addressing cross-border crises.

Jaques draws his book to a close by directing the reader back to his beginning premise, that addressing key aspects of leadership is required for successful navigation of a crisis. He reminds the reader of the data from the Institute for Crisis Management in Denver, Colorado that shows more than half of all corporate crises are caused by management; either management action or inaction. He concludes that the role of executive leadership in a crisis is to drive a learning orientation. The uncluttered explanations of key issue management concepts make this book a useful addition to the practitioner and non-practitioner alike.