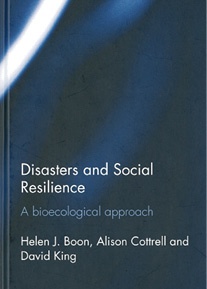 Boon, Cottrell and King have launched into ‘resilience’, the fad topic of the 2000s, using Bronfenbrenner’s model of bioecological systems to introduce ‘a fresh methodology and a model for examining and measuring impacts and responses to disasters’. It also addresses the demand to measure, no matter how complex, uncertain or subtle. They go on to state: ‘This framework or theoretical lens permits an accurate examination of individuals as well as larger entities such as communities and cities’. They have attempted a very tough task because resilience is such a seductive concept. Everyone can see what they want in it; from those who genuinely want to understand the complexities of disasters through to those who are just expropriating the latest fad term.

The book has the very ambitious goal: ‘the interconnectedness between communities, organisations, governing bodies, policy and individuals in the field of disaster studies has never been accurately examined or comprehensively modelled’. I am not entirely sure that the disaster research community would agree with such an assertion or whether this book has achieved this remarkable objective. There is a very long history of researchers grappling with disasters and social effects. In 1920, Samuel H. Prince published Catastrophe and Social Change, based on a sociological study of the Halifax Disaster.1 Disaster researchers have been grappling with disasters and social and individual effects ever since. Significant progress in addressing these challenges was achieved by Dynes and Quarantelli at the Disaster Research Centre established in 1963. They were supported by other research groups that evolved in the latter half of the 20th century, largely in the US but also in Canada and Australia.

The authors work with the idea that ‘resilience in its various and diverse definitions is considered to be an adaptive state for individuals and communities to aim for when threatened with the prospect of impending hazard events’. They make the very important point that ‘empirical evidence has led to an emerging agreement in research circles that resilience can be investigated as a desired outcome condition or as a process leading to a desired outcome’.

The book is structured in two main parts. The first four chapters provide context and an introduction to Bronfenbrenner’s model of bioecological systems and sets up the rationale for its application in the natural disaster context. The next five chapters address each element of Bronfenbrenner’s system and finish off with a set of recommendations for policy and emergency management.

Bronfenbrenner’s model has the following five components or elements: microsystem, mesosytems, exosystem, macrosystem and chronosystem. The systems ‘are consecutive layers comprising the social and environmental milieu which are visualised as a nested set’.

Microsystem are patterns of activities, roles and interpersonal relations including clubs, church, home, workplaces. Mesosytems are networks between microsystem entities examining influences of family and neighbours on a person’s disaster resilience. Exosystem includes things like hospitals, shopping malls, local community facilities and infrastructure, but would also include ‘the effects of emergency management warnings upon preparedness and subsequent disaster resilience’. Macrosystem includes culture, government, customs, beliefs, values and laws. Chronosystem is the timing of events or the effects of environmental changes over time. ‘The effects of environmental changes such as climate change and individual mobility in relation to changes in individual disaster resilience.’ ‘This moves each of the other systems into different spaces and phases of resilience.’

It is disappointing to see the authors making some basic errors such as claiming that ‘the phases of disaster in Australia are planning, preparedness, response and recovery’ when they are prevention, preparedness response and recovery. However the book makes a useful contribution to disaster management by highlighting the complexities of the concept of social resilience in the context of disasters. It provides an opportunity for the reader to reflect on social resilience and disasters.

1 Prince SH 1920, Catastrophe and Social Change, based on a sociological study of the Halifax Disaster. At: https://archive.org/details/catastrophesocia00prinuoft.