It is with sadness that we mark the passing of Claire Zara and honour her legacy to the emergency management field.

Researcher, journalist and published author, Claire held degrees in the arts, education and in children’s literature. As an interviewer, Claire was tenacious, incisive and perceptive, and her warmth and unique sense of humour characterised every interview. She was driven by her sense of justice and fairness with a goal of system change and societal change.

In the wake of Black Saturday in 2009, Claire turned her research skills to considering how gender is central in the ways women and men experience disaster. She used this to build a growing body of knowledge and literature on gender and disaster and, critically, to advance gender-sensitive policy, practice and research in emergency management.

Her work was pivotal in a 2013 VicHealth Award for ‘Family violence after natural disaster research: breaking new ground’, in the category of ‘Knowledge and Understanding’. The same year, Claire and her co-researcher were honoured with an invitation to present the 6th Annual Professor Frederick ‘Skip’ Burkle Jnr Keynote Lecture at Monash University on the topic of ‘Risky Research’. In 2014, Claire travelled to Canberra with her co-workers to receive a Resilient Australia Award, sponsored by the Attorney-General’s Department, for ‘Gender & Disaster: Leading the Change’, in the category of ‘Projects of National Significance’.

Claire authored and co-authored multiple articles, book chapters, reviews and media releases on the subject of gender and disaster and presented at numerous conferences and events. International audiences were reached via inclusion in the United Nations Office for Disaster Risk Reduction’s publication, Women’s Leadership in Risk Resilient Development: Good Practices and Lessons Learned, a conference presentation in Japan, and a webinar on family violence after disaster that was broadcast to women in the Asia Pacific via the Soroptomists.

In addition to her research, Claire led the development and piloting of training tools and resources for emergency services agencies. She played a central role in the establishment of the Victorian Gender and Disaster Taskforce in January 2014.

Up until weeks before her death in early 2015, Claire was still heavily engaged in advancing initiatives for men and women in the area of gender and disaster. As a testament to her contribution, the 15th Annual Emergency Management Conference (7 July 2015) hosted the Inaugural Claire Zara Memorial Oration. The Oration was given by Australia’s Sex Discrimination Commissioner, Elizabeth Broderick, Air Chief Marshall Sir Angus Houston and ACT Emergency Services Commissioner Dominic Lane, who all spoke of the significance of Claire’s work in this field. 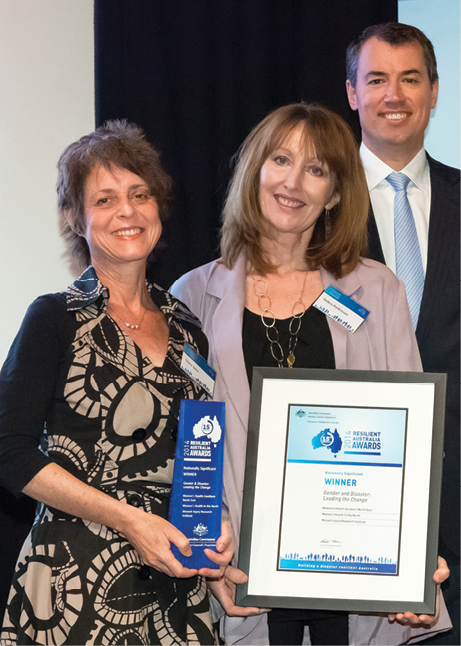