Across Australia, fire agencies use the Forest Fire Danger Index (FFDI) and Grass Fire Danger Index (GFDI) to assess the risk of a fire. These indices describe the conditions that allow fires to start and continue burning. They were developed largely in the 1950s and 1960s to determine the risk posed to forestry assets. However, there are a number of limitations to the current Fire Danger Rating system; most notably, that it is based on science that is now not sufficiently robust and comprehensive to underpin such an important decision support tool.

But this is changing. A seven-year research project begun by the Bushfire CRC, the Attorney-General’s Department, and all states and territories is working to implement a new fire danger rating system. The new system will improve the ability of fire and emergency service agencies to provide public warnings, engage with the community generally about fire danger, to set levels of fire preparedness and to support fire protection decision making.

The CEO of the Bushfire and Natural Hazards CRC, Dr Richard Thornton, said the project addresses a recommendation from the Victorian Bushfires Royal Commission.

‘This is a nationally significant research project. While the Royal Commission findings were largely based on the Black Saturday bushfires, its recommendations are relevant across the nation. The research is helping to forecast fire risk in a much more accurate way,’ he said.

Part of the project included (in partnership with CSIRO) an analysis of the 825 known civilian and firefighter fatalities recorded from 1901–2011. This is the most comprehensive dataset of these fatalities ever assembled and reinforces the need for the new fire danger rating system to indicate the potential for damage to communities.

In 110 years, 65 per cent of all civilian fatalities have occurred on just 10 days.

The analysis of these fatalities focused on the relationship between where the death occurred, the arrival of the fire to that location, weather conditions, proximity to fuel, and the person’s activity and decision-making leading up to their death. From this analysis it is evident that fire weather and proximity to bushland are very strong drivers for defining the potential for fatalities to occur.

Over 78 per cent of all fatalities occurred within 30 metres of bushland, and 50 per cent of all fatalities occurred on days where the fire danger index exceeded 100. The current FFDI threshold for declaring a day as ‘catastrophic’ is 100, while the GFDI trigger for a ‘catastrophic’ rating is 120 (except for Western Australia, where it is 100). The proximity to bush will be taken into account in the new fire danger ratings, which can be localised to specific towns.

Several iconic Australian bushfires have occurred under very severe weather conditions. Black Friday in 1939, Ash Wednesday in 1983, and Black Saturday in 2009 were all horrific bushfires that have made their mark on our way of life. Australian bushfire fatalities are dominated by fires like these. So much so, that in 110 years, 65 per cent of all civilian fatalities have occurred on just 10 days.

‘We need to know more about the days on which these large numbers of deaths occur,’ says Dr Thornton.

‘Increasing our understanding of these large events allows for substantial improvements in being able to help communities understand their level of fire risk and alert them to the potential loss of life.

The new system also integrates the probability of property loss. Work in this area is being undertaken with the assistance of the Centre for Risk Management of Bushfires at the University of Wollongong. This study delivers a spatially-explicit framework capable of generating daily maps that represent the distribution of the probability of property loss down to 10 kilometres accuracy. This will allow fire agencies to provide more accurate warnings and community advice.

The role of weather forecasts is also being refined by the Bureau of Meteorology. Part of this has been achieved by calculating the long-term average for a comprehensive set of fire danger indicators. These data cover the period from 1979 to the present, and is the most complete nation-wide assessment of fire weather ever undertaken in Australia. Dr Thornton highlights this as a major advancement in fire weather science in Australia. 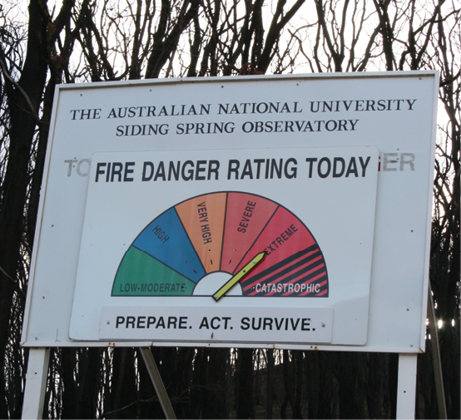 ‘This will highlight which indicators are the best predictors of bad fire risk days across the country. The time lapse since our current system was developed is large, and the leaps in the science great.

‘Our knowledge will be greatly improved if we can predict more accurately days like Black Saturday even further ahead than we can now. The next step is to try to determine a better index to capture these factors,’ he said.

This project is part of the Australian Government’s $3.6 million National Emergency Management Program, and the Bushfire and Natural Hazards CRC will complete the research.