In the lead up to the 2013 Resilient Australia Awards, Linley Wilkie revisits winners from last year's awards, in the Victorian town of Carisbrook.

This spring, Carisbrook residents are sure to be busy planting roses and other blooms in the town’s new reflective rose and sensory gardens, designed to be enjoyed by everyone in the small Victorian community. Such was the anticipation of this new feature, local paper, The Carisbrook Mercury printed progress photographs on its front page. The picturesque project is just one of many that Carisbrook’s ‘Pigs Might Fly’ (now Carisbrook Projects) has organised since winning a state and national 2012 Resilient Australia Award.

The Resilient Australia Awards are sponsored by the Attorney-General’s Department and recognises innovative and successful approaches to making Australian communities safer, stronger, more resilient and ready in an emergency situation.

Carisbrook was devastated by floods in January 2011, with hundreds of homes inundated and some townsfolk displaced for more than a year. Morale became troublingly low, and after unsuccessful attempts by Central Goldfields Shire Council to engage the community, they decided to connect with other disaster-affected towns instead, who guided the people of Carisbrook through ways to rebuild their lives and the community.

Locals were asked to submit three wishes for Carisbrook and a total of nearly 1000 wishes were presented in a meeting in July last year. More than 100 residents devoured a spit roast pig as they pored over the ideas and the community steering committee, christened ‘Pigs Might Fly’, was born. This and subsequent gatherings resulted in six major projects, a number of smaller projects and a Resilient Australia Award championing their efforts.

Locals were naturally delighted by the accolade, displaying the award in the local post office and touting the win on the home page of the Carisbrook Projects website (carisbrook.org.au). Daily newspaper, the Bendigo Advertiser (Carisbrook sits within the greater Bendigo district, an hour drive away) regarded the win to be so newsworthy, it devoted a full page to the award. 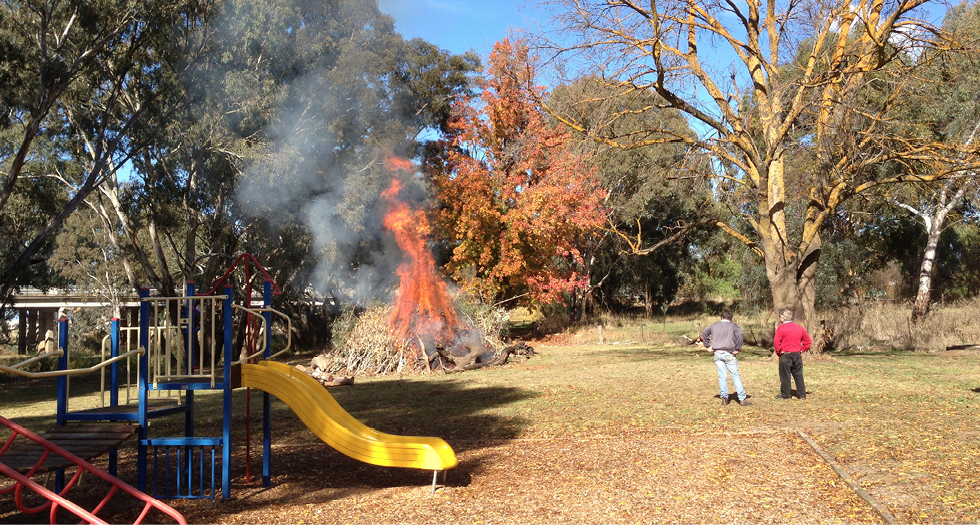 Carisbrook residents burn off debris cleared from a local creek.

‘It was just a wonderful feeling that others could see the value in what we’d been doing and saw that this was a legitimate way of assisting ourselves recover,’ says Lyn Symons, secretary of Carisbrook Projects.

‘Pigs Might Fly’ changed its name to Carisbrook Projects late in 2012 to better identity the town at the heart of the mission.

The group’s vice president, John Taylor said, ‘We wanted something that would identify the town for the next five, 10, 15, 20 years. What we’re doing now in its initial stages is setting the wheels in motion for this to last as long as the town is here.’

Never short on volunteers, Carisbrook Projects is made up of several committees which meet independently to organise events such as an annual festival, and developments such as a playground, skate park and the rose garden.

Lyn Symons has already produced a Welcome Kit for new residents. ‘What the project did was give people permission not to wait for others; you can actually do these things yourself. It doesn’t need to be generated by an external group. If you wanted to do something and you’ve got a couple of like-minded people, do it. Then everyone benefits,’ she says.

Symons says Pigs Might Fly/Carisbrook Projects also got more people talking to each other. ‘There’s a collective understanding that there is a lot of people who are really proud of the town.’ Indeed, no sports team or business has closed since the 2011 floods and Taylor says the population of about 800 has increased slightly in that time, with eight new homes built.

Recognising the success of the Pigs Might Fly/Carisbrook Projects model, Central Goldfields Shire Council, Australian Red Cross and Monash Disaster Resilience Initiative joined forces in 2012 to create the Community Resilience Mentorship Initiative (CRMI). Funded by the Victorian Office of Emergency Services Commissioner, the CRMI plan is to replicate Carisbrook’s achievements and help other communities help each other.

‘There’s a huge amount of knowledge and experience embedded in communities that have recovered that is not being effectively accessed and we wanted a way to shift that from being an ad hoc process to a more formalised resource,’ says CRMI project manager, Sonny Neale. ‘The goal it is to build a network of communities to learn from and support each other in their own recovery, enhance their own capacity for social resilience following an emergency and allow communities to take charge of their own responses by working together.’ 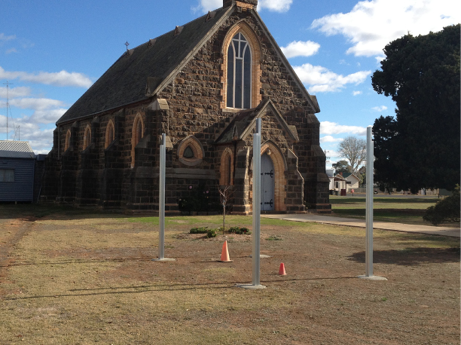 A new gazebo under construction.

Following the mentoring from other disaster-affected communities, Carisbrook Projects has tried to assist other Victorian communities searching for guidance. The organisation spoke with the residents of Chewton late last year about their achievements. ‘It’s a town that has been part of a busy road, quite divided and (they are) wanting to make it more of a village,’ Symons says. ‘They were looking to engage with the community like we have.’

Carisbrook Projects continues to work on their plans for improving the town and its community, locals operating with a renewed trust in themselves and their abilities. ‘The way the whole town decided on the projects and how they wanted things done was something that hadn’t been done in that format,’ Taylor says. ‘They got extremely excited and the excitement that evolved through the different projects is still there, from July last year to today. They all want to be part of the future of Carisbrook. That’s the biggest plus for any town.’

For more information about the CRMI, email Sonny Neale at SonnyN@cgoldshire.vic.gov.au. 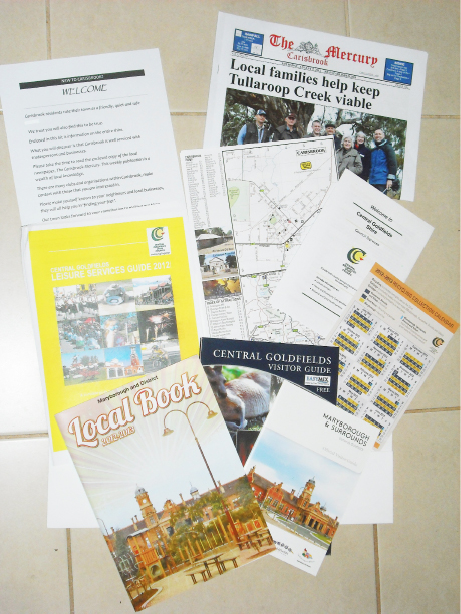 Carisbrook Projects has produced a Welcome Kit for new residents.

The Carisbrook community gather as the town unites after the 2011 floods.