New Zealand Shake Out: More than 1.3 million people in New Zealand participate in a drop, cover and hold earthquake drill

At 9:26am on Wednesday 26 September 2012, more than 1.3 million people in New Zealand (approximately 30 per cent of the population) practised the right actions to take in an earthquake: Drop, Cover and Hold. This was the country’s first ever nation-wide earthquake drill and was part of an earthquake preparedness campaign, New Zealand ShakeOut. The campaign aimed to help people in New Zealand better prepare for an earthquake. Participants included individuals and families, schools, businesses, government departments, emergency services, community groups and many other organisations.

New Zealanders became well aware of the devastating effects of large earthquakes in 2010 and 2011 following the Canterbury earthquakes. New Zealand ShakeOut built on that awareness and encouraged people to learn what to do in their homes, schools, workplaces or wherever they might be in the event of an earthquake. While the earthquake hazard varies from region to region, all of New Zealand is prone to earthquakes and everyone needs to know what to do when they occur.

The Drop, Cover and Hold drill was the focal point of the campaign. It is a clear, simple action that people can take to prepare themselves for an earthquake. The drill was only a first step. The campaign encouraged people to look at their preparedness in more detail. As well as the drill, many businesses and other organisations developed, reviewed or tested their emergency plans, and families wrote and/or tested their household emergency plans.

New Zealand ShakeOut was based on the highly successful Great California ShakeOut, which began in 2008 and is an annual event involving over 8 million people. The ShakeOut concept has spread to other states in the US and to other countries including Canada, Italy, Puerto Rico, and Japan. In New Zealand, the West Coast held its own Great West Coast ShakeOut in 2009 as part of a civil defence exercise. New Zealand ShakeOut was the first national ShakeOut earthquake drill in the world.

Two campaign co-ordinators were appointed from the MCDEM who worked closely with the lead co-ordinator of the Great California ShakeOut earthquake drills, Mark Benthien, to ensure the development of the New Zealand ShakeOut was successful. 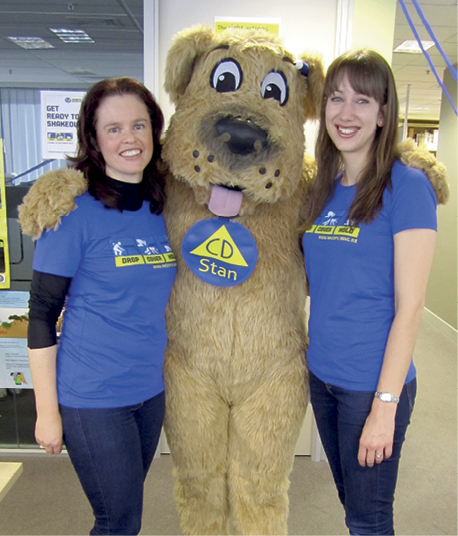 As the campaign was an all-of-government campaign, a ShakeOut Planning Team was formed in 2011. It consisted of representatives from central government, local government, emergency services, and GNS Science. The team met once a month leading up to the ShakeOut exercise and was responsible for setting the aims, objectives, key performance indicators and the general approach to making New Zealand ShakeOut a success. One of the ambitious objectives established was to have 1 million people participate in the Drop, Cover and Hold drill.

New Zealand ShakeOut was essentially a public education campaign, and therefore an ‘approach from all angles’ mentality was adopted. A huge number of resources was compiled ahead of the campaign launch on March 29, including a dedicated New Zealand ShakeOut website. The website was the main conduit of information for the campaign and allowed people to register their participation, see who else was participating, get information about how to be involved, find out about the earthquake risk in their region, and learn how to prepare for earthquakes. Resources available on the website include drill manuals and other planning documents, posters and flyers, Facebook and web banners, logos and other artwork, colouring-in pictures, online ads and videos, and screensavers.

The website and the drill were promoted through a multi-media campaign using news media, advertising (TV, print, radio and online) and central and local government communication networks. New Drop, Cover and Hold TV ads were launched on 28 June. Drop, Cover and Hold radio advertising was also developed and aired from late August through to 26 September. Social media (Facebook and Twitter) were used to spread the word about ShakeOut and to engage with the public.

Eighteen different category groups (individuals, schools, businesses, etc) were identified and resources and information were tailored for their needs. Throughout the campaign much effort was put into direct contact with these groups. The Minister, the Director, Mayors, Planning Team members, MCDEM, CDEM Group and Council staff, encouraged people to sign up for New Zealand ShakeOut. Letters were written, phone calls made, articles written, and many presentations given. The strong, active involvement of many central and local government agencies that used their existing contacts and networks was absolutely crucial to the success of New Zealand ShakeOut.

The success of New Zealand ShakeOut was not only reflected by the 1.3 million people who were involved but by the way the campaign fostered stronger links and engagement across central and local government agencies and businesses, all focused on emergency management.

Stories from around the country

Nelson City and Tasman District Councils had all staff, Mayors, Deputy Mayors and CEOs practising Drop, Cover and Hold. Staff and teachers of Garin College gathered in assembly and did the drill - just over 500 students at once! Local pre-schools had a ‘shaky shaky’ day, having jelly castles, and messy lunches. Nelson Mitre 10 Mega hardware store hosted local radio stations and the Nelson-based New Zealand Response Team 2. Nelson Library had a real turtle come in for Turtle safe story time (Turtle safe is the resource used to teach pre-school aged children Drop, Cover and Hold). The builders at all Gibbons sites stopped work at 9:26am and did the Drop, Cover and Hold drill. 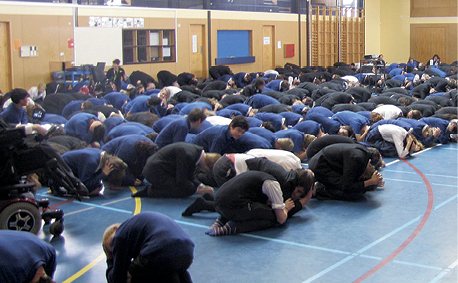 In Hawke’s Bay nearly 47,000 residents registered to participate in New Zealand ShakeOut, a great result! Schools, local authorities and other workplaces dropped, covered and held with some going on to complete full evacuation and rescue exercises. Solar powered torch radios and personal survival kits were given away as incentives to register for New Zealand ShakeOut with more available to anyone in Hawke’s Bay who uploaded stories or photos of their ShakeOut experience. An important element was the use of the well-known Hawke’s Bay Civil Defence Emergency Management Group website (www.hbemergency.govt.nz) to provide local content and links to the national New Zealand ShakeOut website.

Staff at Waipawa Kindergarten taught the children the right actions to take during an earthquake.

More than 90,000 people in Waikato signalled their intent to participate in New Zealand ShakeOut, including around 65,000 pre-schoolers and students who completed the Drop, Cover, Hold exercise. At Te Aroha Community Hospital, the drill started a 24-hour exercise which involved shutting off power and water supplies. CEO Nikki Close said at the end of the exercise that some changes would need to be made to the hospital’s emergency plan, but overall procedures in place beforehand had worked well. “The whole point of the exercise was to find the stresses in the plan, identifying what was idealistic versus realistic. There are some parts of the plan which will need to be re-written.” All staff involved in the exercise, which spanned three shifts, participated in a debrief. 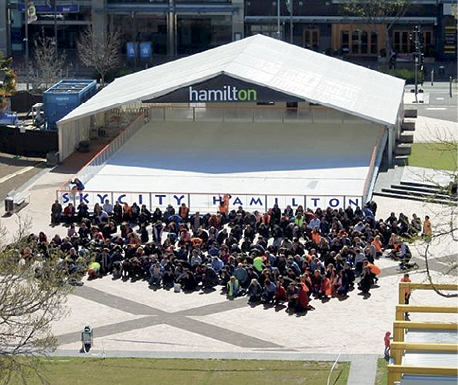 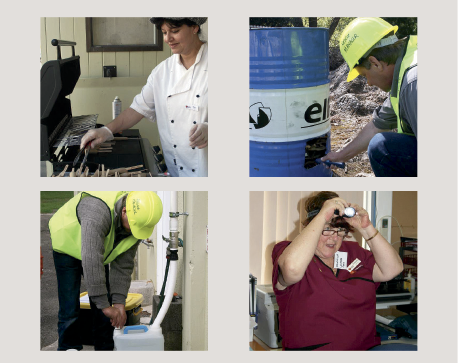 After the whistles had stopped being blown and Bay of Plenty Regional Council staff were given the all clear to emerge from under their desks, the real benefit of the exercise was obvious at the debrief. Staff began thinking about what they’d do once the shaking stopped, and how they might contact their families and meet up with them when they couldn’t just jump in a car. The debriefs in each of the five offices provided food for thought for many staff who then headed home to ensure their household emergency plans were up to date. Bay of Plenty Regional Council staff in Tauanga assemble after an evacuation of their building during the exercise. 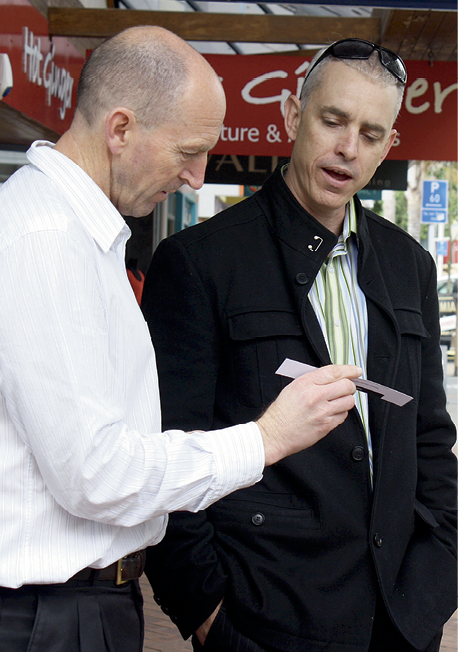 James Lowe and David Phizacklea of the Bay of Plenty Regional Council talk through a scenario.

Despite being well practised in what to do during earthquakes, with over 10,000 earthquakes rocking the region since September 2010, many Cantabrians still showed support to New Zealand ShakeOut. Five schools from the Waimate district (175 students, plus teachers and parents) participated in an exercise starting with the New Zealand Shakeout drill, and then an afternoon of earthquake related scenarios including learning how to boil water and make shelters. Students went home with a home survival kit checklist to complete. One school in Kaikoura was fully evacuated and a welfare centre established. All councils in the region took part, with the Regional Council and Ashburton and Kaikoura District Councils practising full evacuations. Many community radio stations played features leading up to the day as well as helped to trigger the drill by playing the civil defence ‘sting’ at 9:26am (the ‘sting’ is an electronic sound that has been given to broadcasters to use before making an official civil defence emergency announcement). 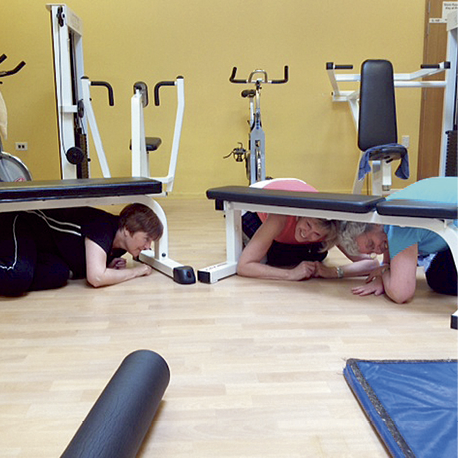 Recreation Centre staff and members drop for cover during a workout session.

For WREMO, New Zealand ShakeOut was all about community engagement. The earthquake drill was the opportunity for emergency management staff to be out and about in their community and encourage people to practise Drop, Cover and Hold. Staff were involved with local council drills and evacuations. Berhampore School, whose registration took New Zealand ShakeOut to more than 1 million participants, warmly received goodies from the mascot, Stan the Dog. Wellington International Airport provided national media with a focal point for an en-mass Drop, Cover and Hold drill. Senior Advisor Craig Hamilton hailed the campaign a success, “A successful campaign – Yes, ShakeOut has opened doors for us, now our challenge is to keep them open.”

Anita Komen is an Emergency Management Advisor at the Ministry of Civil Defence & Emergency Management. Anita co-coordinated the New Zealand ShakeOut exercise over 2011-2012. Anita works on issues to do with the co-ordination and accessibility of civil defence emergency management research, ensuring that evidence-based best practice is promulgated across the field. She also contributes to disaster risk management in Samoa.