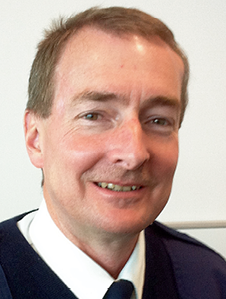 Richard Woods is the Operations Manager for the ACT Rural Fire Service in Canberra. He is the current Chair of the International Association of Arson Investigators, Wildland Arson Committee; Australian representative of the North American based National Wildfire Co-ordinating Group Wildland Fire Investigation Team and is a former President of the NSW Chapter (47) of the International Association of Arson Investigators. He has been a member of the AFAC Fire Investigation Network Group since 2000.

Superintendent Richard Woods has led the development of a Wildfire Arson Investigation Management Course to enhance the skills of fire and police agency investigators in Australia and New Zealand.

In August, two courses were delivered to 39 students from Australia, New Zealand and, in a first for this new initiative, Europe.

Since 2009, Superintendent Richard Woods has been working to develop a specialist course to improve the investigation skills of fire and police investigators in investigating serial wildfire arson. Funding was received from the Attorney-General’s Department National Emergency Management Projects Grants in 2010 and 2011. Significant work was undertaken by the ACT Emergency Services Agency in conjunction with a reference group of course facilitators from across Australia and New Zealand, to develop the ‘Wildfire Arson Investigation Management Course’. Two courses were conducted in August preparing fire and police investigators for the 2012/13 fire season.

According to Richard, “one of the fundamental issues regarding the successful investigation of wildfire arsonists in Australia over the years has been the need to improve co-ordination and collaboration of investigation expertise. Both fire and police investigators bring skills and experience from differing backgrounds. It’s been shown that these must be combined to deal more successfully with serial wildfire arson.” In more recent years, this has been addressed across a number of jurisdictions, however, ensuring investigation personnel are trained to a common level has been lacking. This course now fills that void.

The two Wildfire Arson Investigation Management Courses were held at the Australian Emergency Management Institute at Mt Macedon in Victoria. The courses ran between Sunday 5 August and Friday 17 August 2012, with very positive results coming from both. Students covered theory and practical sessions during the six-day courses and combined their collective skills in wildfire investigations with specialist aspects of analysis associated with wildfire arson events.

Interest in the courses was received from Europe and students from The Netherlands fire and police services attended along with a student from Italy (being a researcher currently working with the RMIT University in Melbourne). Their attendance provided an excellent opportunity to test the finalised course content for multi-agency application and possible future international student attendance. Feedback from all attendees was very positive, indicating they had gained significant skills in dealing with wildfire arson. In fact, one student (a Crime Analyst from The Netherlands Police Department) stated he would be applying much of the theory covered in addressing other areas of criminal investigation and analysis back in Europe. Further, The Netherlands Fire Service Investigators provided the class with an example of a serial wildfire arson case that extended over a number of years. Using the theory provided in the classroom, the students analysed this case and provided recommendations for avenues of investigation that had not been considered by the investigators. These outcomes provide significant endorsement of the content and the need for this specialist course. 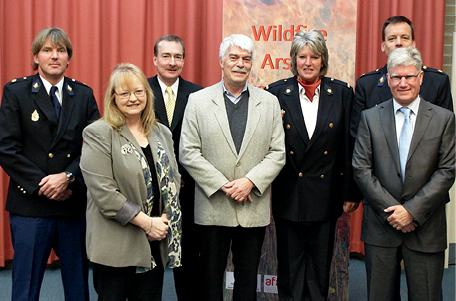 Course content was finalised in consultation with stakeholders, including:

In addition, the National Bushfire Arson Prevention Working Group endorsed the course in its overseeing role of the National Work Plan to Reduce Bushfire Arson in Australia. Importantly, the Action Plan was specifically mentioned in the 2009 Victorian Bushfires Royal Commission Recommendations, namely, Recommendation 36, “The Commonwealth, states and territories continue to pursue the National Action Plan to Reduce Bushfire Arson in Australia, giving priority to producing a nationally consistent framework for data collection and evaluating current and proposed programs in order to identify and share best-practice approaches” (Victorian Bushfires Royal Commission, 2009). The course is part of the Action Plan and provides an opportunity to share the latest in world best-practice to investigate serial wildfire arson between state and territory agencies.

It also links to Recommendation 35, (specific to the Victoria Police in this Recommendation, however has broader benefit to all state and territory agencies), providing “centralised coordination that includes comprehensive training, periodic evaluation of arson prevention strategies and programs, and promotion of best-practice prevention approaches” (Victorian Bushfires Royal Commission, 2009).

The content and makeup of the course was the result of personal commitment by members of the Course Reference Group. Richard stressed that “the advantage of engaging these officers from across Australian and New Zealand police and fire agencies has seen the combining of skills to refine content and delivery. This allows the application of specialist skills that can be applied across the different jurisdictional areas and, now, Europe”.

A key aim was to ensure the theory covered was reinforced with examples and cases from the Australian scene. An example was the Task Force Phoenix Victorian Police Investigation into the 2009 ‘Black Saturday’ bushfires. As one of the largest wildfire cases to be investigated in Australia’s history, this provided an excellent example of the significant challenges faced by the Victorian fire and police investigators after the event.

Students were also provided with a serial wildfire case which they had to solve by the last day of the course. This ‘real life’ scenario meant they had to develop a solid legal case which was presented to ‘prosecutors’ on the final day. The exercise was optimised because investigators from both police and fire services could work together using their combined skills and experience to identify and charge the arsonist.

An important aspect of the final phase of the project was to finalise the accreditation. Given the diverse range of skills delivered during the course, this was always going to be a challenge. However this was addressed by the Canberra Institute of Technology (CIT) in concert with the Reference Group. Participating students achieve formal recognition through the ‘Diploma of Government Investigations’ and the Unit PUAFIR612A (‘Undertake Post-Incident Analysis’), post-course. CIT is considered the logical link for issuing of qualifications given their involvement in law enforcement training, particularly that of fire investigation and criminal investigation.

It is anticipated that this specialist course will be delivered annually, based on demand and subject to funding opportunities.

The problem of wildfire arson is a significant issue across Australia and New Zealand. Understandably, there is an expectation for the crime to be solved, arsonists to be prosecuted and, ultimately, reduce its occurrence. Enhancing the skills of fire and police agency investigators in this challenging area will increase their ability to detect and prosecute wildfire arsonists. The course provides investigators with the latest skills and knowledge to identify arsonists. Ultimately, a co-operative investigation team approach will lead to safer communities with a reduction in deliberate fire lighting.

To date, no similar course has been available in Australia or New Zealand. In August 2012 the Wildfire Arson Investigation Management Course was awarded ‘Winner in the Federal Project Category of the 2012 Resilient Australia Awards’ for the ACT.

“The co-operation and support of the Attorney-General’s Department, the reference group members and their agencies needs acknowledgement. In addition, the ongoing support of the ACT Emergency Services Agency in hosting this project was integral to its success,” said Richard.