The Framework is the new global blue print to build resilience to disasters. Its expected outcome over the next 15 years is to realise ‘substantial reduction of disaster risk and losses in lives, livelihoods and health and in the economic, physical, social, cultural and environmental assets of persons, businesses, communities and countries.’

Building on the progress made under its predecessor, the Hyogo Framework for Action 2005-2015, the new Framework places a strong emphasis on managing disaster risk, as opposed to simply managing disasters. Like Australia’s National Strategy for Disaster Resilience, it acknowledges the importance of all stakeholders (governments, civil society, and the private sector) working together in the design and implementation of disaster risk reduction policies and plans. It has a strong emphasis on the value of engaging with those more marginalised in the community, such as women, children, the poor, migrants, indigenous communities and those with disabilities. Further, the Framework recognises that managing disaster risk is an important component of sustainable development, and acknowledges that close linkages need to be made between the disaster resilience, sustainable development and climate change agendas.

To achieve its outcome, the Framework outlines four key priorities for action that focus on a better understanding of risk, strengthened disaster risk governance, greater investment, and greater disaster preparedness based on the principle of ‘building back better’. The Framework also articulates seven global targets (see Global targets of the Sendai Framework). Member countries will now work together to develop indicators for each of the seven targets which, once developed, will allow countries to measure whether the outcome of the Framework is being realised.

Global targets of the Sendai Framework

4. Substantially reduce disaster damage to critical infrastructure and disruption of basic services, among them health and educational facilities, including through the development of their resilience by 2030.

5. Substantially increase the number of countries with national and local disaster risk reduction strategies by 2020.

6. Substantially enhance international cooperation to developing countries through adequate and sustainable support to complement their national actions for implementation of this Framework by 2030.

7. Substantially increase the availability of and access to multi-hazard early warning systems and disaster risk information and assessments to the people by 2030.

The 3WCDRR saw the highest ever levels of participation at an international meeting on disaster risk reduction with thousands descending on Sendai to share experiences and build partnerships. In addition to intergovernmental elements, over 50 000 people attended the public forum. The public forum was the perfect platform for delegations to share their countries’ initiatives while learning about best practice in other regions. Highlighting the work under the National Strategy for Disaster Resilience, adopted by the Council of Australian Governments (COAG) in 2011, Australian delegates at the Australia exhibition booth were very well received. Australia’s National Strategy for Disaster Resilience mirrors elements of the new Sendai Framework, encouraging a whole-of-nation resilience-based approach to disaster management. 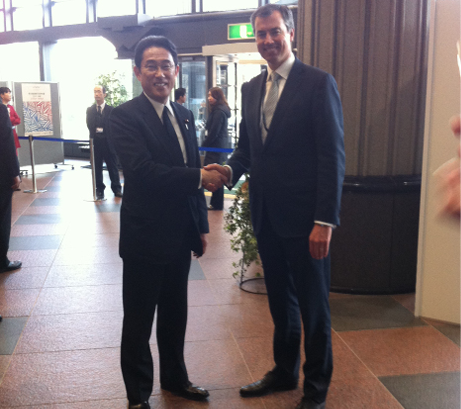 The Minister for Justice, the Hon Michael Keenan MP, led the official Australian delegation. Accompanying the Minister were officials from various Commonwealth agencies, as well as David Place from the South Australian Fire and Emergency Services Commission and Damien Killalea from the Tasmania Fire Service. There were also a number of prominent Australian academics in attendance, including John Handmer from RMIT, Michael Eburn from the ANU, and Kevin Ronan from CQU. Throughout the conference Minister Keenan highlighted Australia’s experiences in disaster risk reduction, particularly through delivery of Australia’s official country statement and participation in the Ministerial Roundtable ‘Reconstructing After Disasters: Building Back Better’. At the Ministerial Roundtable the Minister shared Australia’s own experiences in ‘building back better’ using the successful land swap initiative implemented in the town of Grantham, Queensland as an example of success in this area.

Minister Keenan also visited Minami Sanriku, a town in the Tohoku region devastated by the earthquake and tsunami of March 2011. Minami Sanriku was the focus of Australian search and recovery operations. Minister Keenan’s visit further solidified the strong relationship between Australia and the Tohoku region, where Australia continues to contribute to the region’s recovery. Australian sponsorship of ‘Koala house’, a community-based library service, is just one example of Australia’s commitment to the regrowth of communities.

The importance of the Framework and its call for greater collaboration across country borders and sectors was highlighted when the devastating news broke of Cyclone Pam’s landfall on Vanuatu. When delivering his country statement on the very first day of the conference, Vanuatu’s President Baldwin Lonsdale reminded member states that no country is immune to disaster risk and there is a need to work together. This was a sombre reminder of the importance of the conference and in building disaster risk reduction worldwide.

The need for greater engagement between governments and the private sector was another key theme at the conference. The Australian Business Roundtable for Disaster Resilience and Safer Communities received a certificate of distinction in the prestigious 2015 United Nations Sasakawa Award for Risk Reduction presented during the conference. Established in 1986, the award recognises innovative efforts to reduce the impact of disaster and build resilience. This was a significant achievement that highlighted the successes Australia is having under the shared responsibility model of the National Strategy for Disaster Resilience.

With the global blue print now agreed, regional and national bodies will develop instruments towards the achievement of targets to ensure the outcomes of the Sendai Framework are realised. As stated by the Secretary-General of the United Nations Ban Ki-moon, the Sendai Framework is ‘the first step of our journey to a new future’. It is now up to everybody to show strong commitment and leadership to this cause.

Information on the 3WCDRR, including Australia’s country statement and the Framework are available at: www.wcdrr.org.

EMA’s podcast includes the 3WCDRR and the Framework at: www.em.gov.au.