Journalist Linley Wilkie, talks with Chilean PhD student, Jorge Leon, whose research into land-use planning and discovery of the AJEM brought him to Australia.

Jorge Leon was working as an assistant professor at Chilean university, Universidad Técnica Federico Santa María when he first encountered the University of Melbourne’s Dr Alan March. It was following the February 2010 tsunami that devastated coastal regions in south-central Chile and, having completed his masters degree in urban planning, Jorge was keen to undertake a PhD in urban planning and disaster. While researching the possibilities, he came across an article written by Dr March titled A better future from imagining the worst: land use planning and training responses to natural disaster.

‘The article compared the planning process to the emergency management process and looked at the similarities and differences between the two,’ explained Jorge of the piece that appeared on the online version of the Australian Journal of Emergency Management (AJEM). ‘It was precisely the area I wanted to research.’ After contacting Dr March to discuss the possibility of the Associate Professor supervising his doctorate, Jorge moved to Australia in November 2011 and is now a PhD student at the University of Melbourne Faculty of Architecture, Building and Planning.

In what has proven to be a productive few years since his successful application, Jorge’s concepts regarding urban planning for disaster were reinforced this year following an earthquake in his homeland. His studies have also branched into further areas with Dr March – little wonder Jorge is such an advocate for open source journals such as AJEM, given the wealth of information and professional contacts they provide.

‘The majority of journals are supported by businesses, such as academic institutions and research institutes and subscribers pay a yearly fee to access these journals,’ he said. ‘It’s so important to have open journals that can be accessed by any person. AJEM is good because it provides very interesting topics and its approach engages a wider audience. It’s more interesting and easier to read for a person who comes from outside academia,’ he said.

Dr March says it’s not unusual for overseas students to contact him about PhD opportunities at the University of Melbourne. ‘We have a very strong pull from international PhD students and have more international PhD students than Australian ones. People are quite keen to do a PhD overseas because it adds an extra dimension to their study and allows for some comparative understanding, as well as being a career path with different opportunities,’ he said.

For Jorge, his PhD at the University of Melbourne provided an opportunity to research the relationship between urban design and evacuation during rapid onset disasters, specifically tsunami evacuation. When I first spoke with Jorge in late 2013, he was studying two tsunami cases in Chile; one in the port city of Talcahuano, which was seriously affected by the 2010 tsunami (‘Not a lot of people died, but a large part of the city was washed out by the waves,’ he recalls) and other in Iquique. The northern city had experienced three or four tsunamis throughout history, the most recent in 1877.

‘With earthquakes, the gap between them is very important and you can predict you’re going to have an earthquake every 50 or so years,’ Jorge explained. ‘In this case it’s been almost 150 years, so they are expecting a large one. The problem is during the last one it was a minor city, but now the city has grown and you have about 180 000 people in a very vulnerable condition.’

On 1 April 2014, Iquique experienced the earthquake seismologists predicted, measuring 8.2 on the Richter scale. ‘Although it was a very large earthquake, the good news is it was not the major earthquake that was expected,’ said Jorge; the quake measuring a rupture length of 200km, instead of the expected 600km. He says the tsunami triggered by the earthquake caused relatively minor damage, with flooding predominantly restricted to fishing coasts. ‘It had perfect timing, if there is such a thing, because it happened on a weekday at 8:46pm and not in summer, which is the tourist season in Chile. The critical CBD area, which is the most populated place in the city, was not as occupied as it is during summer. The beaches weren’t crowded with people and kids weren’t in school, so it was a relatively good scenario,’ explained Jorge.

Jorge said he had read in subsequent articles that Iquique residents reacted quite well, save for the expected problems. ‘Many people used their cars to evacuate, so there were reports about a lot of congestion. The evacuation took a lot of time because of this and there was a problem with pedestrians and traffic. People were hit by cars, but none of them died.’ Jorge says issues also arose due to highly overcrowded assembly places. ‘Iquique is a city in the desert and seriously lacks any type of open green spaces. So everyone tried to assemble in the streets and those places were not prepared for those people.’

Jorge said the response to April’s earthquake supports his previous hypothesis and observations. ‘Many of the things I thought would happen actually happened, however the overall pressure of the emergency was not as high as expected, because there was no serious tsunami. The good thing is the population reacted quite well in the city because they were expecting this kind of event. The physical environment of the city however, was not quite as prepared.’

It’s this point that speaks directly to Jorge’s research in urban planning and disaster. ‘Chile is located very close to a seismic fault line, where the two plates collide. They usually happen 200km from the Chilean coast and a typical tsunami moves at between 100 and 500km per hour, depending on the ocean’s depth. So as soon as the earthquake ends, you have probably a maximum of 30 minutes to get to safer ground. It’s a very chaotic and complicated situation’ said Jorge. He reasons that urban design can help move people in a more effective way, likening it to existing building practices. ‘Buildings have been built with security measures, such as safe assembly areas, for decades. That hasn’t happened yet for the overall design of a city and I’m trying to translate that model to the urban realm,’ he said.

Jorge proposes a set of design recommendations for cities and is working towards providing an assessment tool to compare two scenarios. ‘If we implement this type of recommendation, we could improve the situation by a certain amount and remove the population (of Iquique, for example) in less than 10 minutes.’ Dr March says he automatically saw the merit in Jorge’s proposal. ‘I realised that while it’s about tsunami, which is not an area I’ve worked in much, it is work that goes right to the core of disaster, risk management, urban planning and design. When you start looking at this stuff, the theoretical and practical parallels across these disciplines are very transferable, Dr March said. 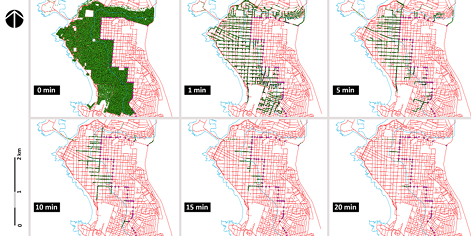 Snapshots from the Iquique tsunami evacuation model, showing the evacuees (green dots), the urban network (red lines), the safe assembly points (in pink), and the expected flooding area (blue line), for different times during an emergency.

Jorge’s broader thoughts on urban planning address the rights of individuals to build where they choose, versus the responsibility of authorities to warn people of the risks. ‘You’re always going to have a set of very competing needs or requirements. There is no such thing as a 100 per cent safe location or city or house. That’s impossible. However I do think that governments or people involved with emergency management have a responsibility to let people know that they are actually doing a trade-off – “If you’re going to build here, you’re going to be in a vulnerable condition forever and your house may last 50 years, or you may face 10 emergencies” – people have a right to know that,’ he said.

Jorge believes people often live with the illusion that they are in a very safe location, or can be protected from natural disasters. ‘I met with researchers when I was in Chile and they said after a big tragedy you have a five-year window to put into place all the things you need to change. People cannot continue to live with the feeling of vulnerability all the time, so after those five years they try to forget or want to believe they are safe. That’s why it’s important to have a plan about how you’re going to rebuild after the disaster, instead of starting to develop a plan after the disaster happens. Everything has to be ready,’ he said.

Dr March says in an area of urban planning research that is relatively new, Jorge has shown it is possible to join together thinking about urban planning and design with thinking about disaster risk reduction. ‘There’s so much work that needs to be done in that field and Jorge has shown that it can be done for a particular case.’ Dr March said Jorge has also demonstrated that his research has international relevance which can be drawn back into the wider literature and applied not just to tsunamis, but other events such as bushfires.

‘Jorge and I have done some work looking at evacuation possibilities and recasting those methodologies onto quite different scenarios, such as a suburb of Bendigo, to see if it could add understanding about the design of subdivisions when we consider the way fire moves through a landscape,’ he said. ‘That’s been fantastic and everything a PhD should be. You get very specific outcomes but also things that can be applied elsewhere and can be published.’