What does it mean to survive a natural disaster? To mark International Day for Disaster Reduction on 13 October, the Bushfire and Natural Hazards CRC hosted a public event to garner perspectives on disaster risk reduction.

Recognised globally by the United Nations, the day focuses on a different theme annually. This year communities, organisations, government and individuals reflected on the theme, ‘Live to Tell’, discussing fatalities and the survivors of disasters.

Held at RMIT University, the free public forum focused on the research and policies aimed at preventing deaths during natural disasters. A variety of speakers tackled the theme from different angles including policy and practice, research and human behaviour. The event considered what it means to survive a disaster and how community members live to tell the story.

Speakers at the forum included:

In his role as Director General of EMA, Mark Crosweller is responsible for the coordination of Australia’s response to crises including natural disasters, and terrorist and security-related incidents.

Mr Crosweller provided a federal government perspective and addressed a simple but ultimately complex question: Are we prepared for catastrophic disasters?

Mr Crosweller argued that we need to accept the inevitability of unimaginable, catastrophic disasters in order to prepare for them. He said that when that extreme level of disaster severity is reached the impact and consequences begin to exceed our capability because we have never experienced them.

‘Understanding our point of limitation is very important. One of the points of limit in the human mind is the limits of knowledge, skills, experience and imagination.

‘When you hit extreme and catastrophic, the event and its manifestation goes way past capability. When you talk to commissioners and chief officers, two things come out of the conversations. One is “we dodged a bullet”; they say that it could have been worse, and the second thing they’ll often say is “we were stretched to our limit”,’ he said.

John Schauble, Director for Emergency Management and Resilience at EMV spoke about Victoria’s policies in disaster risk reduction and the importance of the language used to frame policies.

‘The emphasis here in Victoria has shifted very much from managing risk to managing consequence,’ he said.

Rather than focusing efforts on what agencies and government can do in the wake of disasters, the focus has turned to building resilient communities. He said that EMV is developing a risk resilience framework to help communities to make decisions.

Reflecting on the 2009 Black Saturday fires that claimed 173 lives, Mr Schauble spoke about the shift in policy and language in Victoria. In the aftermath of Black Saturday ‘primacy of life’ emerged as the principle policy.

‘The immediate aftermath of significant disasters is the worst possible time to develop public policy, yet this is often the political cycle in which public policy is made.

‘It’s interesting because I’m sure no one in government or the fire industries, certainly not firefighters, ever doubted that primacy of life was the key objective.

‘The Stay or Go policy that was active at the time of the fires, placed too high a premium on the idea that property ranked equally with preservation of life.

‘The policy shift was one of emphasis. The message became ‘leave early’ and the defence of property became secondary,’ Mr Schauble explained.

The shift in bushfire policy was put to the test in Victoria during the bushfire on Christmas Day 2015 in Wye River. Mr Schauble reflected that the change worked well and resulted in no loss of life.

‘There was a clear message. There was a community that was primed for action and they took action.

‘As a sector, we’re accepting that we can’t actually eliminate risk but we can increase the capacity of communities to bounce back afterwards,’ he said.

Research by Dr Katharine Haynes investigated fatalities from natural hazards, in particular floods. A dataset of information was created to identify trends related to each fatality.

Dr Haynes explained that the data show most flood fatalities were men, making up 80 per cent of all recorded flood fatalities since 1900. However, this trend is shown to be shifting over time.

‘Although there are still (statistically) more men dying in floods, from the 1960s onwards we’re seeing more female fatalities,’ she said.

So why are people dying in floods and how can we change that? The research showed that often people simply underestimate the danger.

‘The highest proportion of men and women die while attempting to cross a bridge or flooded road. Where the information is available, we can see that most of those people are trying to make their way home,’ said Dr Haynes.

The research also considered people’s capacity to make decisions during the event.

‘For most people, they are aware of the flood but the speed and depth [of the flood] took them by surprise,’ she said.

Most of the deaths in vehicles occurred at night or during twilight hours when visibility was poor. This could suggest that drivers are unaware of the exact danger of the situation, explained Dr Haynes.

The research poses many questions as to whether the messages are getting through to people, whether investment is required to improve infrastructure and whether evaluation of risk reduction strategies is accurate.

Dr Woolf used contrasting examples of the 6.2 magnitude earthquake that struck central Italy in August 2016, killing 250 people, and a similar magnitude earthquake in the Petermann Ranges in Australia that resulted in no deaths. The difference, of course, was the location. The earthquake in Italy struck in a densely populated and built environment, while the Petermann Ranges in the remote Northern Territory is largely unpopulated.

Dr Woolf’s research used realistic disaster scenario analysis to model potential disasters in urban cities in Australia and gain a greater understanding of the effects. She provided an example scenario involving a 4.3 magnitude earthquake in the greater Sydney area.

‘With the work we are doing modelling disaster scenarios we are asking: What can we do to prevent some of these impacts from happening; specifically when it comes to injuries and fatalities?’ she said.

Dr Woolf’s scenario analysis looked at how to mitigate the effects of a Sydney earthquake by retrofitting houses. When modelling the same magnitude earthquake on retrofitted housing, the damage was significantly reduced. The answer could be in improving the strength of existing structures explained Dr Woolf.

‘We can understand elements of the puzzle that we can actually control to improve the outcome, in terms of fatalities and injuries.

‘In the case of earthquakes and many other hazards, all the housing and infrastructure legacy assets are vulnerable to hazards. We think about modern building codes but forget they are not applicable to many of the structures you see around you,’ she said. 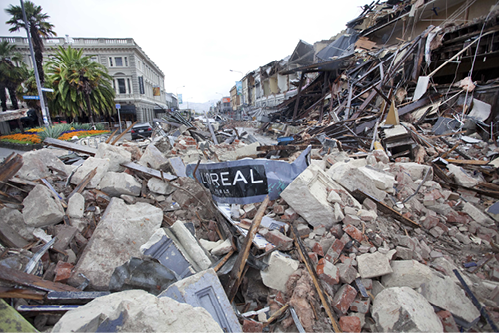 Australia needs to consider the impact earthquakes could have on major cities and how the effects could be mitigated through retrofitting buildings. Image: John McCombe, New Zealand Fire Service

The human side of disasters

John Richardson, National Coordinator, Preparedness, Australian Red Cross, provided a different perspective to disaster resilience and what it means to survive a disaster event. Drawing on his experience as a registered nurse working in bereavement and trauma, he focused on the human side of fatalities.

‘Death is an increasingly foreign concept for us in modern society. When death happens now it’s unusual. It is a surprise so our societal reactions are quite overt,’ he said.

Mr Richardson spoke about the meaning that death gives to disasters and the way that is interpreted.

‘We tend to categorise disasters by death tolls, not by those who have been left behind to deal with the aftermath, or those who survive.

‘The ingrained attitudes we place on survivors in telling them they are lucky and to think of those who didn’t survive are potentially harmful. Your experience as a survivor is actually diminished.

‘Another human inclination is the tendency to feel collective ownership over disasters. This can be damaging to survivors and families and friends of those who died,’ said Mr Richardson.

The forum closed with a panel discussion. The forum was filmed and can be viewed at www.bnhcrc.com.au.