Disaster resilience can be defined in many ways, but ultimately it is about making communities safer, stronger and better prepared to manage natural disasters

Key to a more resilient Australia is recognising that resilience is not just the domain of the emergency services, but also business, community organisations and individuals.

By celebrating innovation and best practice, the Resilient Australia Awards showcase work that is often unrecognised, inspiring others to think about how they can be more disaster resilient.

Since its inception in 2000, the Awards program has recognised excellence and innovation in emergency management and has received over 1100 entries, including 106 in 2015.

Emergency Management Australia Director General, Mark Crosweller, who was part of the judging panel for the 2015 national awards, said the awards served an important role in fostering resilience.

‘The quality of entries is very impressive, as is the amount of work going on in the space of resilience more broadly.

‘The thing I love about the Resilient Australia Awards, and resilience more generally in Australia, is how diverse the project scope is, how innovative people’s thinking is in relation to what resilience means to them, and how they can work with their communities to put it into effect,’ Mr Crosweller said.

The Resilient Australia Awards celebrate the many achievements of those who are actively working to make Australia more resilient to natural disasters. The Awards, which are sponsored by the Attorney-General’s Department in conjunction with the states and territories, are coordinated by the Department’s Emergency Management Policy Branch and a team of very enthusiastic state and territory convenors.

The Minister for Justice, the Hon Michael Keenan MP, announced the national award winners at a ceremony at Parliament House in November. 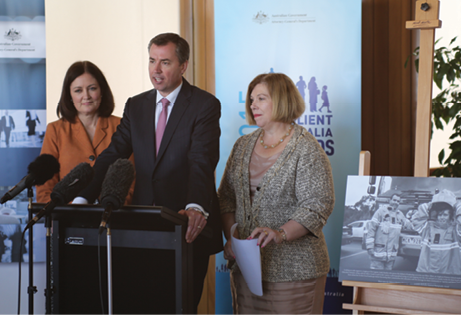 The 2015 National Australia Award winner was GIVIT, a Brisbane-based company that was established in 2009 to coordinate donated goods going to members of the community most in need. GIVIT’s sophisticated online platform provides a simple, proven, coordinated response to quickly match donations and ensure offers of assistance get to where they are most needed. Minister Keenan said that GIVIT could not be more deserving of this title.

‘I’m proud to say Australians are renowned for being very generous at donating both goods and cash following an event that causes hardship to others. GIVIT’s award for making a significant improvement to the handling of donated goods demonstrates how important this is to the recovery process.

‘I’d like to congratulate GIVIT on their ongoing commitment to their local community, Queensland, and the nation as a whole,’ Mr Keenan said.

The Hon Teresa Gambaro, Federal Member for Brisbane, presented the award to GIVIT.

‘The Queensland floods were absolutely devastating and I’m honoured to be here today to present to you this award because you and your team at GIVIT have done so much,’ Ms Gambaro said at the presentation.

‘Not only at the time of those floods — when there is a house fire, or a family in need — you match those donations and get it to the people who need it the most. You do it with no fuss at all. You just get in there and do it,’ Ms Gambaro said.

Mark Crosweller, who often experienced the challenge of dealing with a deluge of donations in his early career in the NSW Rural Fire Service, said GIVIT was a worthy winner.

This year’s entries covered all aspects of disaster management including risk assessment, mitigation, education and training, community awareness, response and recovery. State and territory winners were acknowledged at ceremonies in their jurisdictions throughout October and November.

Due to the quality of the entries the judges also awarded four national ‘Highly Commended’ citations that were announced by Minister Keenan.

Insurance Australia Group ‘StormSafe: Doing a little could save the lot’ (NSW)

Brings together community members and leaders to build a better understanding of emergency management planning and responses. Rebecca’s photograph depicts Andy Rankin of the Anglesea Country Fire Authority handing his captain’s helmet to his son Elliot as part of Elliot’s participation in the Anglesea Fire Education Initiative. Under the initiative, students learn about fire in their local landscape to become their community’s fire educators. Both Andy and Elliot Rankin were able to travel to Canberra to be at the ceremony.

‘I just wanted to say very warm congratulations. The image that you have captured here is of Andy and Elliot in the car park of the Anglesea Primary School taking part in a very important fire safety program geared to local school students.

‘Some of you might remember that back in 1983 the Ash Wednesday bushfires engulfed much of Anglesea and many places across the Great Ocean Road. The memories of that disaster remain very, very strong and are alive in the members of the Anglesea community,’ Ms Henderson said.

The Photograph Award competition commenced in August when the People’s Choice Photo Competition was conducted via an online public vote. The editorial team of the Australian Journal of Emergency Management selected the photo from the winners chosen by public vote in the states and territories. The team recognised that, as well as its aesthetic qualities — it’s a great photo — the image embodies themes of succession planning and business continuity, change management, leadership, and youth in emergency management.