2015 Resilience Roundtable: co-working as a way of enhancing collaboration in post-disaster environments

In 2009 the Council of Australian Governments (COAG) agreed to adopt a whole-of-nation resilience-based approach to disaster management. COAG later released the National Strategy for Disaster Resilience in 2011. The strategy acknowledges that `non-government and community organisations are at the forefront of strengthening disaster resilience in Australia' (COAG 2011). Since 2012, Australian Red Cross has been hosting annual Resilience Roundtable events as a way to explore the themes identified in the strategy. The 2015 Resilience Roundtable was held in September with the theme of co-working as a way to practically enhance collaboration in disaster recovery. A full report of the 2015 Resilience Roundtable is available on the Australian Red Cross website (www.redcross.org.au).

The National Strategy for Disaster Resilience (NSDR) acknowledges that disaster resilience relies on society as a whole and not solely on government, emergency services organisations and local authorities. It recognises that a national, coordinated and cooperative effort is required to enhance Australia’s capacity to withstand and recover from emergencies and disasters.

In 2012, the inaugural Resilience Roundtable explored the concept of social capital and its application in emergency management policy and practice. The 2014 Resilience Roundtable looked at the role that not-for-profit and non-traditional stakeholders (e.g. Landcare, BlazeAid, FireFoxes, Country Women’s Association, Scouts, etc) could play in emergency management. In 2015, co-working as a mechanism to practically enhance collaboration was explored.

Co-working occurs when personnel from two or more organisations share the same office or work space with the intention of sharing resources, information, and building an understanding of each other’s overarching goals. Other terms for this in the existing literature are used almost interchangeably, being co-working, co-habitation and co-location.

There has been limited research into co-working arrangements in recovery settings. However, there is growing support for co-working in ‘grey’ literature, including from Emergency Management Victoria and the Canadian military. There is also an increase in case studies using co-working in response and recovery settings as a tool to enhance coordination, cooperation and collaboration.

In the private sector, outside of the emergency management sector, there is a growing body of literature highlighting the benefits of co-working. While relatively new, there is research being undertaken to explore the benefits, challenges and practicalities of co-working, especially in software development and creative and start-up industries. The 2015 Resilience Roundtable report contains more information regarding existing literature and case studies.

In Australia there are three themes fuelling exploration of co-working. The first is the emphasis on coordination and cooperation in the NSDR. The second is the growth in organisations co-working during disaster recovery. The third is the growth of co-working in the private sector, with dozens of businesses and initiatives springing up to foster greater collaboration and cooperation among individual, independent workers.

The confluence of the three themes is expressed through examples such as the new Victorian State Control Centre (SCC), managed by Emergency Management Victoria. The SCC is a dedicated space providing multi-agency access during a response to emergencies. It does this by bringing in personnel from dozens of organisations to the same physical space. This improves coordination and creates cooperation during the immediate response to an emergency. By being physically located in the same space – within metres of each other – agency representatives can quickly exchange critical information, can make decisions and execute multi-agency response plans in multi-agency teams (Emergency Management Victoria 2015). This practice has existed in the response phase for some time as well as in the early recovery phase (e.g. in recovery centres), however it is now appearing in longer-term recovery settings. 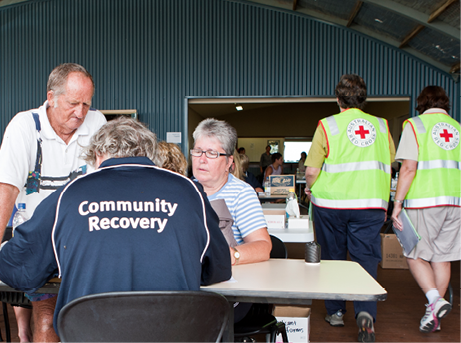 Over the last decade Australia has experienced greater use of co-working arrangements, particularly at evacuation and recovery centres. Image: Australian Red Cross.

In the private sector, co-working occurs when a group of independent workers carry out their various tasks in a shared workspace. Co-working offers collaborative workspaces where freelancers and small business operators use shared facilities and can connect with each other in exchange for paying a membership fee. The Australian co-working industry is growing rapidly. In 2011, there were only a handful of co-working spaces. However, as of February 2015 there were over 140 co-working spaces, work hubs and incubators across Australia (McLaren & Krauskopf 2015). Examples include Inspire9 in Melbourne, The Hub in Adelaide, Sydney and Melbourne, and SpaceCubed in Perth.

Internationally, these themes are being expressed similarly but are more advanced (Bacigalupo 2012). In the private sector, the international co-working industry has experienced double-digit growth since it first appeared in the early 2000s. The number of co-working spaces globally is estimated at 9000 with the prediction of 1 million co-workers by 2018 (Sykes 2014). This demand for co-working spaces has been driven by a contingent workforce with a need to connect with each other.

The emphasis on coordination and collaboration has been institutionalised in the United Nations Office for the Coordination of Humanitarian Affairs (UN OCHA). The office is part of the United Nations Secretariat and is responsible for bringing together humanitarian organisations to ensure a coherent response to emergencies. UN OCHA plays a key coordination role in crisis situations, including assessing situations and needs, agreeing on common priorities, developing common strategies to address significant issues, clarifying consistent public messaging, and monitoring progress. UN OCHA is the custodian of the global cluster system, which is a way of structuring coordination based on similar principles to those of co-working, i.e. bringing people from different sectors and organisations into one room to enable sharing of information, to promote innovation to solve problems, and to support effective multi-sector action.

The international response to Typhoon Haiyan in the Philippines provides many examples of deliberate co-working. Co-working was central to the humanitarian response and was highly valued by stakeholders. This continued into the longer-term recovery phase. In Roxas City in the province of Capiz in the Philippines, dozens of humanitarian organisations were co-located in the Mayor’s office in the City Hall along with international military forces that were there to provide extra support. The Canadian military identified that co-working arrangements during the response was critical to the high functioning civil-military coordination and has since recommended co-working and co-location for any future situations where coordination and collaboration on that scale is required. The After Action Review of the United Nations civil-military coordination showed that the benefits of co-working included the efficient, fast and transparent sharing of information, increased coordination effectiveness, and maximised communication with stakeholders (Consultative Group on Humanitarian Civil-Military Coordination 2014).

Another example of co-working in international recovery is the arrangements by New Zealand Red Cross to co-locate with the Stronger Christchurch Infrastructure Rebuild Team. Since 2014, the two organisations have deliberately co-worked. While the outputs of their work are different, strong leadership and careful deliberation over a shared vision has meant that each organisation’s work has been enhanced by the partnership.

Recovery from disaster takes time. The length of time differs for every community. While recovery continues long after response and relief operations cease, it is important that recovery activities begin at the time of impact of the emergency and that all response and relief operations incorporate recovery considerations. The complexity of recovery, the large number of organisations involved and the long-term nature of recovery all suggest that collaboration and cooperation is central to efficient and effective recovery support. In other words, these suggest that co-working arrangements are highly suitable to disaster recovery contexts in Australia.

Hosted in Sydney in 2015 with the support of IAG, the 2015 Resilience Roundtable focused on co-working in the recovery phase of the disaster cycle. The presentations at the Roundtable included perspectives from representatives of local government, New Zealand government, community members from Kinglake in Victoria, Australian and New Zealand Red Cross, the private sector and academia. A list of speakers and summaries of presentations are available in the 2015 Resilience Roundtable report.

The presentations provided five perspectives on co-working and its ability to improve collaboration and cooperation. Despite the differences in perspectives some commonalities emerged. These were:

Roundtable participants addressed particular aspects of co-working in disaster recovery, including its applicability to complex situations, advantages, risks, enablers and barriers. Participants identified the similar characteristics where co-working can be an effective collaboration tool including:

Participants noted that the biggest advantage of co-working is that it encourages strategic coordination of recovery programing, leading to better outcomes for disaster-affected communities. Additionally, a myriad of operational advantages to co-working in recovery were identified. Participants identified that co-working can create shared purpose, assist to build trust quickly across organisations, strengthen the coordination of services, improve cost efficiencies, streamline communication with communities, facilitate information sharing and knowledge transfer, strengthen community engagement and capacity building, and assist to break down silos across organisations.

During the Roundtable discussions, some risks of co-working in disaster recovery were considered. These were categorised (see Table 1) by which stakeholder in co-working bears the risk, i.e. the affected community, leaders, the host organisation, and the guest organisation(s).1

Table 1: Types of risks identified and which stakeholder bears that risk.

Through the input of participants with a range of experience and perspectives, a summary of considerations for the parties involved in co-working in recovery settings was identified (see Table 2).

Roundtable participants strongly agreed that good leadership is central to effective co-working. A champion, or champions, can facilitate co-working arrangements and provide strategic support. Supportive and engaged leaders can promote the shared vision and purpose, protect the independence of the organisations involved, provide clarity around the expectations of the arrangements, and ensure there is strong involvement of community leaders.

Barriers to effective co-working in disaster recovery were identified in discussions. Participants indicated that leaders who are not supportive of co-working can be significant barriers to collaboration. Different organisational cultures and organisational resistance to change can also reduce the efficacy of co-working arrangements. Participants highlighted that leaders have a responsibility to keep well-trained, competent staff during co-working arrangements. The high turnover of staff during the recovery phase is another barrier.

Other barriers to efficient co-working included:

Participants indicated that the availability of funding and resources was a possible limitation of co-working. Different organisational systems, procedures and policies make working together difficult especially if there are no existing agreements in place. Participants noted this was especially true for simple systems, such as printing networks and security procedures.

Despite the identified barriers, participants of the 2015 Resilience Roundtable agreed with and reaffirmed the idea that co-working is a very practical expression of improving coordination, cooperation and collaboration in the sector. Importantly, they listed some follow-up steps they regarded as key to embedding co-working in recovery initiatives.

Four recommendations to further co-working were identified at the conclusion of the Roundtable: 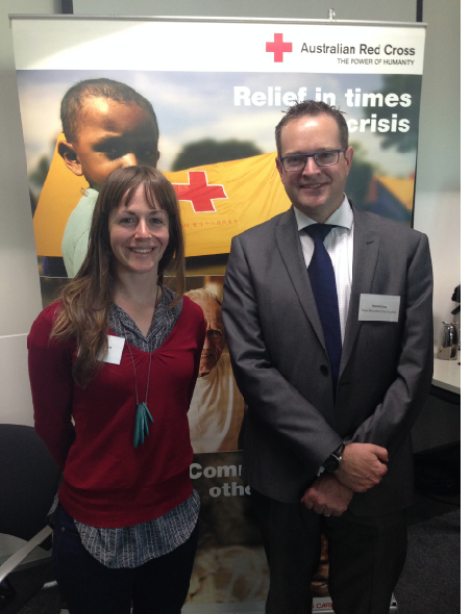 Consultative Group on Humanitarian Civil-Military Coordination 2014, After Action Review on the Humanitarian-Military/Police Coordination and the Use of Foreign Military Assets in Response to Typhoon Haiyan/Yolanda, Philippines, New York.