On 20 February 2014 a Common Incident Management Framework Control Agency Agreement was signed by all South Australian Control Agency Chief Executive Officers. South Australia emergency management arrangements determine a Control Agency for all emergencies regardless of level and require all other agencies to support that control agency in meeting 10 defined objectives for resolving an incident. There are nine different agencies allocated the control role across the emergency spectrum in South Australia. Some of these agencies use the AIIMS model, Police use the ICCS+ model, and there are a number of other derivatives in use. 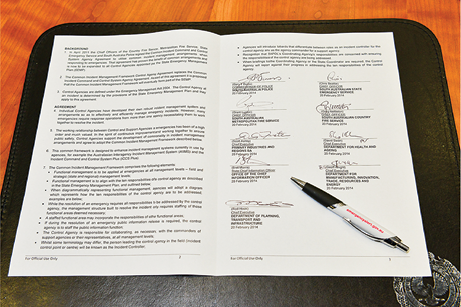 This is a first across Australia and means control agencies in South Australia will work under a common framework, with consistent terminology and standards at local, regional and state levels. In addition, the framework commits the control agencies to:

This last point will reduce a large amount of confusion that arises with multiple persons wearing similar tabards. The new South Australian framework does not detract from the AIIMS or ICCS+ models but builds them into a common framework to ensure interoperability.

This new framework builds on the April 2011 agreement signed by the Country Fire Service (CFS), Metropolitan Fire Service, State Emergency Service and Police which at the time was also a first across the nation. The 2011 agreement has been successful and, in fact, received recent praise at the last South Australian State Emergency Management Committee by the CFS Chief Officer (Mr Greg Nettleton) who asserted that one of the reasons for the successful management of the January fires, heat and flood events was in part due to the seamless integration between the emergency services, due to the common incident command systems in use between emergency services and police in the state. The commonality of this system with national systems also allowed seamless integration of the fire-fighting resources from New South Wales, Western Australian and Victoria. Given that praise, it can be reasonably assumed that the new agreement will have similar benefits for the community. The State Coordinator, Police Commissioner Gary Burns congratulated all signatories for their unity and commitment noting that such cooperation between the agencies significantly contributes to ensuring that the South Australian community receives the best possible response from all agencies in time of an emergency.